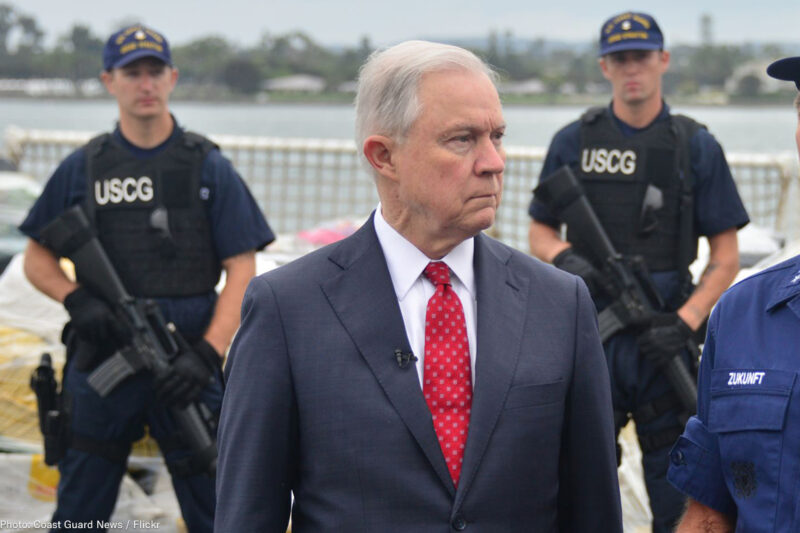 In an interview on Tuesday morning with conservative radio host Hugh Hewitt, Attorney General Jeff Sessions doubled down on his defense of the Trump administration’s practice of tearing apart families seeking refuge in the United States, including those seeking asylum. The interview revealed not only Sessions’ lack of basic empathy and compassion but also his willingness to deceive the public in defending this cruel policy.

During the conversation, Hewitt pushed Sessions to consider the implications of separating a child from his or her parent, even asking if Sessions could imagine his own grandchildren being taken from their parents. Yet Sessions would not be moved, opting instead to paint these devastated, vulnerable parents as criminals who are “just coming here because they’d like to make more money.”

Further questioned on the morality of detaining people seeking asylum, Sessions resorted to outright lies. The issue, Sessions explained, is that people are not pursuing asylum in the correct way, by arriving through a U.S. port of entry: “If you come to the country, you should come through … the port of entry and make a claim of asylum.”

Here’s what the Attorney General is not saying: Under its family separation policy, asylum seekers who have followed this exact protocol are still having their children ripped away. It happened to both Ms. L and Mirian G, two mothers who are a part of our class-action lawsuit. Fleeing the Congo, Ms. L, arrived at a port of entry near San Diego with her then 6-year-old daughter to seek asylum. Despite having committed no crime and having followed the correct protocol for seeking asylum, Ms. L and her daughter were detained. Four days later, her daughter was taken from her and sent to a government facility in Chicago. Ms. L was sent to an immigration detention center. The mother and daughter were kept apart by 2,000 miles for more than four months until the ACLU intervened on their behalf. Mirian G., an asylum seeker from Honduras, experienced similar cruelty: After presenting herself at port of entry, Border Patrol agents took away her 18-month-old son. She didn’t see him again for more than two months.

Sessions would have us believe that those who follow the rules will not be subjected to this kind of inhumane treatment, but that’s simply untrue. No one seeking asylum, even those not entering through ports of entry, should be treated like a criminal. But for Sessions to claim that the administration is only separating families who cross the border illegally is just wrong. Our clients did everything by the book and still had their children taken from them.

Sessions also spent much of the conversation attempting to portray the administration’s family separation policy as par for the course. “Every time somebody … gets prosecuted in America for a crime, American citizens, and they go to jail, they’re separated from their children,” Sessions argued. Parents seeking refuge in the United States who are prosecuted for crossing the border someplace other than a port of entry, Sessions’ line of reasoning goes, are simply being treated as any American citizen who is incarcerated.

But since when does the government refuse to reunite a parent and child after someone has served her time?

Crossing the border without proper documentation is a misdemeanor that typically carries the penalty of a few days in jail if you’re prosecuted. What the Attorney General failed to mention is that the government is refusing to give kids back to parents once they have served their time. Our client, Ms. C, experienced this firsthand. After Ms. C, an asylum seeker who was prosecuted for entering the country illegally, served her 25-day criminal misdemeanor sentence, she expected to be reunited with her 14-year-old son who had been cruelly taken from her. Instead, Ms. C was forced to wait more than eight months after serving her sentence before the two were reunited.

It is one thing to defend a morally reprehensible policy, but it is another thing entirely to spew lies in making that defense. On Tuesday Sessions crossed that line.