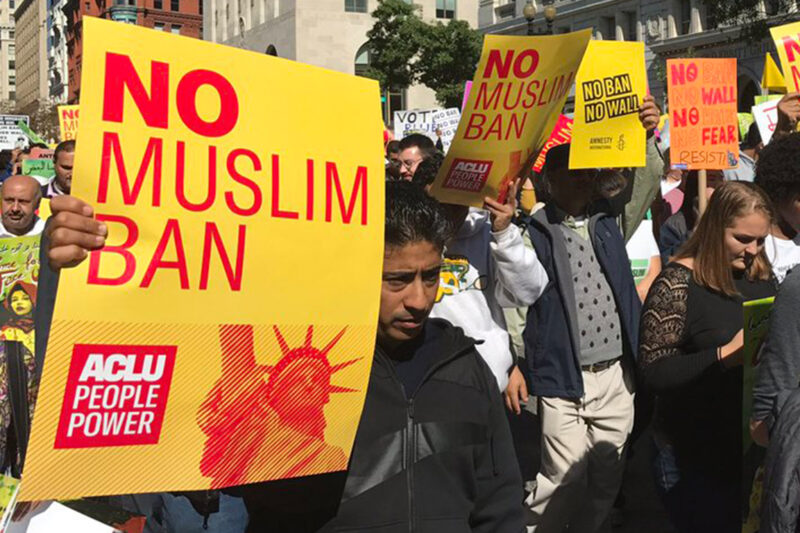 Another day, another pair of court losses for President Trump’s outrageous and illegal Muslim Ban.

Yesterday, federal courts in Maryland and Hawaii rejected the latest iteration of the ban the president promised as a candidate and has been trying to put in place ever since. Just like its predecessors, Muslim Ban 3.0 violates the Constitution, federal statutes, and our bedrock values of religious neutrality and tolerance.

As we have explained, this new ban suffers from the same fundamental flaws as the earlier versions, which were issued in January and March. The courts agree.

In IRAP v. Trump — the case brought by the ACLU and its partners at the National Immigration Law Center and International Refugee Assistance Project — the court held that the new ban, like the earlier versions, violates the Establishment Clause of the Constitution. That clause requires the government to remain neutral among religions and prohibits official condemnation of people because of their religion. The court explained that the new ban is “the inextricable re-animation of the twice-enjoined Muslim ban.” In fact, it is even worse: The prior versions were temporary, but this one is indefinite and potentially permanent.

The court explained that a person with “common sense” would see this ban as “the latest incarnation of the ‘Muslim ban’ originally promised by President Trump as a candidate for the presidency.” The inclusion in this third version of two non-Muslim-majority countries — North Korea and Venezuela — did not “persuasively show a lack of religious purpose” for the ban, the court observed. Rather the bans on both those countries will affect relatively tiny groups compared to the banned Muslim-majority nations. Including them is just window dressing.

The new ban also leans heavily on a secret report that, the government has used as justification. According to the government, the report recommended that a ban (of some kind) be imposed on those countries. But, as the court rightly concluded, the report changes nothing. The president decided what ban to impose, and, as the court noted, the results of the report itself were “at least partially pre-ordained.” In fact, media reports have already brought to light outright manipulation of a related agency process by Stephen Miller, a hardline anti-immigrant advisor to Trump. Miller reportedly instructed agency officials preparing a report on refugees that the “President believes refugees cost more, and the results of this study shouldn’t embarrass the President” — even though the facts and a draft report show that refugees are an economic positive.

Nor, finally, was the court swayed by the government’s reliance on the president’s speech in Saudi Arabia earlier this year “in which he made various positive statements about Islam.” As the court observed, the speech “did not in any way repudiate the President’s prior intention to impose a Muslim ban.” The government’s reliance on such a half-hearted statement is telling.

Any doubt about the president’s continuing message of intolerance and condemnation was dispelled in August, when he invoked a false historical anecdote to endorse an anti-Muslim war crime — extrajudicial executions by “shooting Muslims with bullets dipped in pig’s blood.” And throughout the several versions of the ban and many stages of the legal challenges, Trump has consistently spoken “straight to the American people” urging a “tougher” ban, like the original he signed a week into office as an attempt to deliver on the promised Muslim ban. As the court rightly concluded, common sense is clear that this ban, like the earlier versions, is the president’s attempt to make good on his promise.

As the Hawaii court explained, the president — like other government officials — must “operate within a set of rules,” and when he “forsakes those rules in favor of his own, problems ensue.” The ban forsakes the rules Congress has laid down and attempts to create a new immigration system of the president’s own design. It upends Congress’s system of robust individualized visa screening, in which a visa applicant must already prove to a consular official’s satisfaction that he is not a security threat.

And, as the Hawaii court observed, it “suffers from precisely the same maladies as its predecessor: it lacks sufficient findings that the entry of more than 150 million nationals from six specified countries would be detrimental to the interests of the United States.” Finally, as the Maryland and Hawaii courts explained, it adopts nationality-based discrimination for people seeking green cards, even though Congress has specifically banned that discrimination.

This is surely not the end of this struggle. The government has demonstrated that it will keep trying to establish a Muslim ban. And as long as it does, we and our partners will keep fighting to defend our friends, neighbors, colleagues, and visitors of every religion and to preserve the promise of the Constitution.