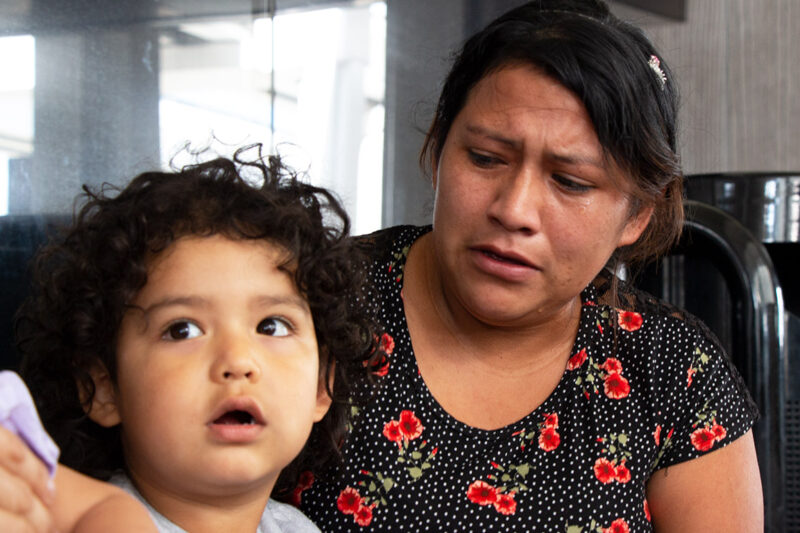 Inside a Texas detention center, 3-year-old Sammy* was asleep next to his father, Ever Reyes-Mejia, on the ground with a tin foil emergency blanket when an Immigration and Customs Enforcement official told Ever that he needed to go see an immigration judge and fill out some paperwork. Ever asked whether he should leave his son asleep and was told that he would return shortly and there was no need to wake him.

That was the last time Ever saw his son before ICE took Sammy across the country to Bethany Christian Services, a foster care agency in Michigan.

Fleeing violence in Honduras, Ever and Sammy came to the United States in April 2018 seeking asylum, presenting themselves to immigration authorities at the McAllen Bridge in Texas. They were two of the thousands of parents and children who were forcibly separated under the Trump administration’s family separation policy. Ever and Sammy were separated for almost three and half months. During that time, Sammy was so upset that he refused to speak to his father on the phone.

On June 26, a federal judge, ruling in the ACLU’s class-action lawsuit, ordered the U.S. government to stop the separation of families and to reunite those who had already been torn apart. Ever was among the first group of parents prioritized for reunification because Sammy was under the age of 5.

On July 10, Ever and his son were reunited at an ICE station in Grand Rapids, Michigan. The ACLU of Michigan, along with community volunteers, were tasked with finding clothing, transportation, and short term housing for the family. They then traveled to Houston to reunite with Sammy’s mother and 5-month-old sister who had been released from detention after seeking asylum themselves.

The reunion that followed offers a window into just what medical experts warned: For children, the trauma of separation doesn’t disappear as soon as they have been reunited with their parents. It can, in fact, last for years, if not forever.

As of August 16, the government had reunited more than 2,000 children with their parents, following the court’s order forcing it to do so. Among the reunited families, there have been reports that many of the children are exhibiting signs of mental health issues and trauma, including anxiety and fear that their parents will be taken away again.

“There is no greater threat to a child’s emotional well-being than being separated from a primary caregiver,” Johanna Bick, a psychology professor at the University of Houston, recently told The New York Times. “Even if it was for a short period, for a child, that’s an eternity,”

At the Houston airport, Sammy refused to look his mother in the eyes. Instead he pulled from her embrace, as she tried to hold him and was saying, “I’m your mommy.” As Sammy crawled away aimlessly, she turned to her husband, asking, “What happened?”

After several attempts, Sammy allowed his mom to pick him up, and the family made their way through the airport, walking amongst other travelers oblivious to the tremendous suffering this family had endured for the past several months. Afterwards, the family of four sat on a bench outside of the B terminal arrivals and discussed their experience with detention, separation, and reunion.

Describing the experience of being separated from her son and husband, Sammy’s mom said, “I felt like I could no longer take anymore. My soul was destroyed.” She continued, “I didn’t know where he had gone or know if my son was alone in a cage without his father.”

“I counted the minutes until I saw him, and when they told me he was on his way over I felt like I wanted him here that second, my soul couldn’t take it, but I am happy with my son,” she said as she kissed Sammy on the head through tears.

The future is still unclear for the Reyes-Mejia family. The family was allowed to reunite and stay with a family sponsor with the caveat of frequent ICE check-ins and the continual use of an ankle monitors. Whether they will prevail in their asylum case is unknown.

While the Reyes-Mejia’s are now together, hundreds of families are still separated. As of August 23, 528 immigrant children still remain in government custody. For hundreds, the government already deported their parents without a plan to locate them, while others are deemed “ineligible” for other reasons by the government for reunification.

In other words, the cruelty continues.

*Names are pseudonyms.Visit www.aclu.org/families to join in the fight to make sure the Trump administration is held accountable and separated families are reunited.