President Trump Is Accelerating the Militarization of the Southwest Border 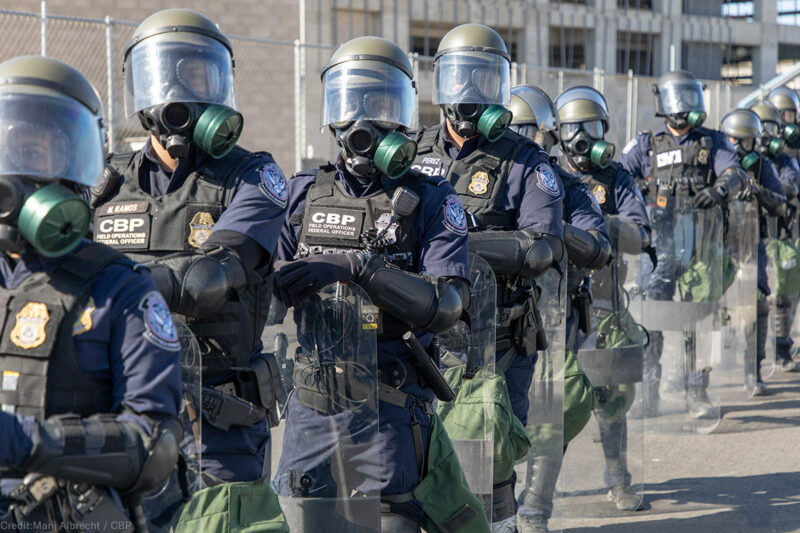 For decades, the ACLU has fought back against the militarization of domestic law enforcement agencies and the use of the military in our communities. Nowhere is this militarization more pronounced than on the border between the U.S. and Mexico — and President Trump is only making it worse.

The creation of the Department of Homeland Security after 9/11 accelerated the government’s operations on the U.S.-Mexico border. U.S. Customs and Border Protection (CBP), a division of DHS, grew in size and scope under the Bush and Obama administrations, gaining additional powers and hiring thousands of new personnel despite a “shocking” pattern of serious misconduct among its officers, including child abuse, sexual assault, wanton cruelty, and murder.

The number of Border Patrol agents more than doubled between fiscal year 2000 and 2011, and by the year President Trump took office, CBP reported 19,437 Border Patrol agents on staff nationwide. This rise in Border Patrol agents, however, does not include thousands of other CBP officers on the border or personnel from other federal, state, and local agencies deployed to the border. Shortly after his inauguration, Trump called for the hiring of an additional 7,500 border agents and 10,000 Immigration and Customs Enforcement (ICE) officers, despite the serious concerns over lack of safeguards in hiring procedures and past corruption and criminality among border agents.

On top of that, Trump joined Bush and Obama in authorizing the deployment of National Guard troops to the border, sending some 4,000 National Guard troops in 2018. Recently, Trump went even further, sending 5,900 military troops to the Southwest border just prior to the midterm election. The directive, ostensibly to address the arrival of the so-called migrant “caravan,” was clearly an effort to stoke fear of immigrants and influence the election. At the time, the caravan was over 1,000 miles from the border, and the number of unauthorized border crossers was one-third the level seen over a decade ago.

The troops will now remain deployed to the border through at least January, even though there is no border crisis requiring a military presence. Despite Trump’s rhetoric, apprehension numbers are at historic lows, and a significant number of apprehensions are family units and unaccompanied children, who, when crossing in-between ports of entry, commonly seek out Border Patrol agents and turn themselves in expressing intentions to seek asylum. This explains why the deployment was rightly panned by military experts as a “blatant political stunt” and a “profound betrayal of our military.” To make matters even worse, the Trump administration has also attempted to expand the military’s authority to use force, including lethal force, along the border.

As government forces, most notably CBP, have gained more authority, personnel, and resources at the U.S.-Mexico border, the result has been an increase in civil rights and liberties violations. In a recent show of force, CBP officers used tear gas on a crowd of largely peaceful men, women, and children seeking asylum, a cruel and unnecessary escalation that violated U.S. obligations under international human rights law to process asylum seekers.

CBP officials also regularly act like the Constitution does not apply in border areas, operating lawlessly and frequently disregarding the Fourth Amendment’s protection against unreasonable searches and seizures in its “100-mile border zone.” The agency’s wrongheaded practice of racial profiling means that people of color face a disproportionate level of constitutional violations along the Southwest border.

But the government’s militarized approach to the border doesn’t only lead to more civil liberties and rights violations — it also leads to more avoidable tragedies.

According to The Guardian, 97 people have died following lethal encounters with CBP personnel since 2003. Such encounters include shootings, car chases ending in deadly crashes, and CBP agents forcing a young man to drink liquid methamphetamine. On May 23, 2018, 20-year old Claudia Patricia Gómez González was shot in the head by a Border Patrol agent shortly after crossing into the U.S.

Trump’s dangerous promise of a 1000-mile border wall is also likely to cause migrant deaths and more human suffering, devastate the environment, waste taxpayer dollars, and damage border communities. His plans build on years of misguided border fencing policies, including the 700 miles of fence construction approved by Bush and completed under the Bush and Obama administrations.

Contributing to the intensification of border security resources has been a lack of political will to create a common-sense immigration system that acknowledges the contributions of immigration and prioritizes the human right to family unity. Coupled with President Trump’s use of the border and immigration issues to drum up racial animosities among voters, the United States continues its slide towards a fully militarized border region that will further erode constitutional protections and human rights in our borderlands.

Pompa testified before the Inter-American Commission on Human Rights on the militarization of the U.S.-Mexico Border on Dec. 6. ACLU testimony before the commission is part of a regional hearing on “Militarization of Public Security in the Americas.”
Read the full written statement.
Watch the testimony.