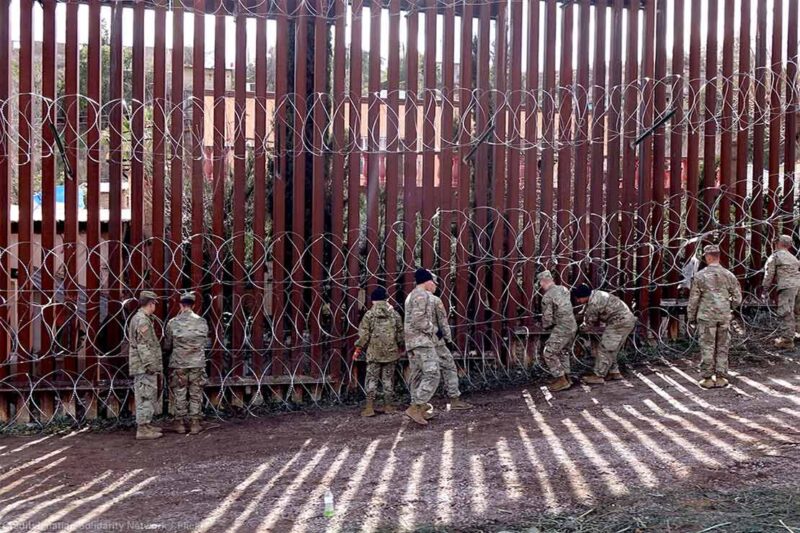 We need to protect rights and liberties at the border to keep communities safe.

There’s an old saying that goes, “When all you have is a hammer, everything looks like a nail.” This adage is especially applicable to the Trump administration’s approach toward border policy, which is ever more militarized. On March 6th, U.S. Customs and Border Protection (CBP) officials announced that the Department of Defense would deploy 160 active-duty troops to ports of entry at the border — 80 to El Paso and another 80 to San Diego.

The deployment is the latest disturbing chapter in the administration’s dangerous and inappropriate record of using the U.S. military at the border. To date, through various operations and at various times, it has expanded military presence by sending approximately 16,000 troops — some of whom have been active-duty service members acting under Defense Department authority and others under state National Guard deployments.

In recent months, we witnessed soldiers searching vehicles at primary inspection points at ports in El Paso as well as in secondary inspection areas in the Rio Grande Valley. We’ve also observed troops checking immigration documents in the middle of an international bridge in El Paso. There’s no ambiguity here: The military should not be searching cars or checking documents at ports of entry. These are potentially unlawful actions, and both the Defense Department and CBP must provide answers to how and why these actions are taking place.

The deployments send a message that our government sees people arriving at the southern U.S. border as a hostile enemy force, rather than who they actually are: vulnerable asylum seekers and migrants seeking safety or a better life. And the language the administration has been using to describe the mission of those soldiers is deeply concerning. One memo said they might participate in “a show or use of force (lethal force, where necessary), crowd control, temporary detention, and cursory search.” Troops recently deployed to El Paso and San Diego have already participated in port closure drills that further militarize and terrorize border communities.

Use of the military to conduct searches or other law enforcement duties threatens this country’s long-standing separation between civilian and military government, which dates to the founding and has been reiterated by Congress in landmark statutes, including especially the Posse Comitatus Act. A core component of that civil-military separation is the general prohibition against the use of the military “to execute the law” unless expressly authorized by the Constitution or an act of Congress.

The administration’s use of soldiers at the border should concern every American. The U.S. military has no business taking part in law enforcement activities like these at the border or anywhere else in the U.S. And the actions of troops we’ve witnessed don’t inspire confidence that they’re following Defense Department regulations that are intended to limit their role.

The administration’s justification for the 160 troops deployment was unfounded claims that a ruling by a federal court of appeals potentially blocking the administration’s policy of forcibly returning asylum seekers to Mexico required military presence. The Supreme Court has allowed the policy to proceed, but the deployment of troops in response to an unfavorable court ruling is nonetheless troubling. Broadening the use of the military domestically for further unneeded fortification of our ports of entry and the continued expanding of their role raises serious civil rights concerns.

Deploying the military like this isn’t just improper, it’s a misuse of public resources. Retired generals have called these deployments “wasteful” and “dangerous,” and the Border Patrol Union called a past deployment a “colossal waste of time.” The U.S. border is simply no place for the military.

For all these reasons, on March 18, the ACLU’s National Security Project and Border Rights Center sent a letter to the Secretary of Defense and the acting head of CBP raising our concerns with the administration’s expanding use of U.S. soldiers at the border — and the searches we documented. We asked these Trump administration officials to immediately clarify what responsibilities troops have been given at ports of entry and make public all directives and guidance issued to troops about their roles and duties. The military should not be used for law enforcement purposes, and the administration must end this practice now.