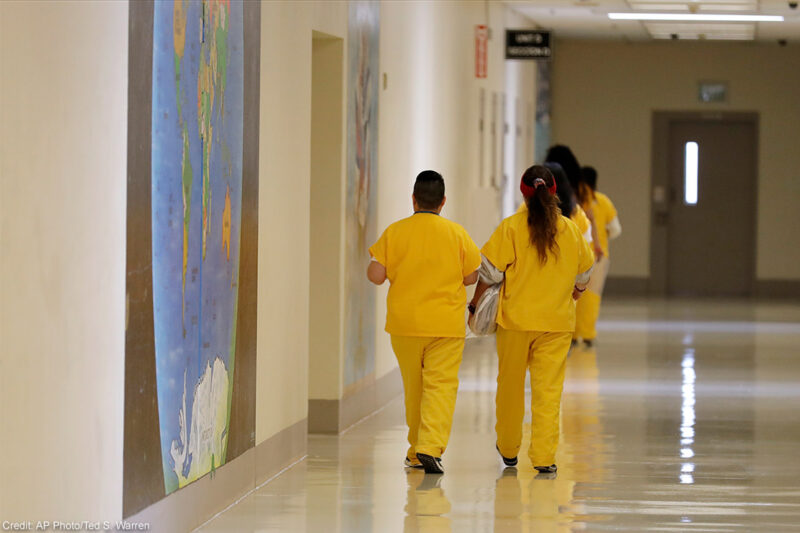 Our immigration detention system is complex and opaque by design. If you don't understand how it works, you're not alone.

What is ICE detention? What is it not?

Immigrations and Customs Enforcement (ICE — pronounced “ice,” like a cube) detention is civil detention. It is not intended to be punishment for a criminal conviction, though conditions are often as bad or worse than those you’d find in prison. It may be shocking to learn that the U.S. government detains tens of thousands of people each day in immigrant detention.

ICE detention exists to ensure people who are currently going through immigration proceedings in the U.S. attend their court dates. An immigration judge can also determine a person’s release presents a “danger to the community” (a subjective determination that isn’t necessarily accurate or fair). ICE detention also serves to effectuate deportation orders for people who are out of legal options to stay in this country. Generally, people in ICE detention are in limbo, waiting to learn whether they can legally remain in the country, or whether they will be deported.

Why should we be concerned about immigration detention?

Immigration detention rips tens of thousands of people away from their families and their communities — including long-time residents who are our neighbors, co-workers and family members. This country has not always spent taxpayer money to lock up immigrants. Until the 1980s, when the private prison profiteers began to flourish, immigrants were free while they navigated the legal process.

In many ways, the detention system mirrors the growth of our mass incarceration crisis — the same machinery that leads to the over-policing and disproportionate sentencing of Black and Brown people in a criminal context has led to growth in the immigration context as well. Now, jails and prisons that emptied out due to criminal justice reforms have turned into detention facilities. Many of them are run by for-profit providers (more on that, later).

The immigrant detention system is marred by the rampant abuse, neglect, and degradation of detained people. These trends have only worsened under the Trump administration, with reports of increased use of force, solitary confinement, patterns of sexual abuse, and an utter failure to protect people from COVID-19. Fiscal Year 2020, which ended Sept. 30, was the deadliest year in ICE detention in 15 years.

Many people are surprised to learn that there really aren’t any legal paths to citizenship for many (if not most) of the 11 million undocumented people in this country. But some of the people in detention did take the “legal route,” including by presenting themselves at a port of entry to apply for asylum. These people have sought refuge in the U.S., and they have been caged as a result. For many of them, there is no clear path out of detention, much less to legal citizenship.

Many people in detention have no way to contact lawyers, or money to pay for them. Many detention centers are in rural locations far from legal organizations, advocates, or other resources to help people navigate the complex system. This problem has only been exacerbated in recent years. An ACLU report released earlier this year found that the more than 40 detention facilities that have opened under Trump have 75 percent fewer lawyers within a 100 mile radius than those opened under prior administrations.

Why wouldn’t we detain people with criminal convictions?

The immigration system lacks many of the protections that are triggered when someone is charged with a crime. If someone poses a threat to public safety, we want to operate in a system that requires the government to show probable cause before an independent judge, with the defendant having access to the full range of due process protections. This is not available in the immigration system.

What is the role of for-profit prisons in the system? Isn’t immigrant detention a government-run program?

The vast majority of people in immigrant detention — 81 percent, according to our recent report — are detained in facilities that are owned and/or operated by for-profit providers like CoreCivic, Geo Group, and LaSalle. That number jumps to 91 percent when you only consider people in facilities opened under the Trump administration. There is simply no way to extricate the profit motive from the vast system of detention that exists in this country.

The profit motive also helps to explain why the medical care, food, and accommodations for detained people are so completely inadequate. These companies receive a certain amount of money per person, which leads to a negative financial incentive to provide good care. That’s why we routinely hear stories of people with cancer being given ibuprofen, for example, or people having to go to court to access soap during a pandemic. Instead of spending millions of dollars imprisoning people looking to build a new life in the U.S., we could help them navigate the legal process and land on their feet.

If we don’t detain people, how will we ensure they make their court date?

The data show that most undocumented people show up for court. Detention is not necessary, nor is it a humane or acceptable de facto response. We do not jail everyone who is awaiting court dates in the criminal legal system because it is a clear violation of their civil liberties, and our constitution protects against that. The same logic should apply to our immigration system. We can build a system that supports immigrants — and the government’s interests — without the cost and the abuses that are part of this fundamentally flawed system.

What are the alternatives to detention?

There are a number of community-based alternatives to detention that are just as effective for ensuring people show up to court, save taxpayers money, and are vastly more humane. The Family Case Management Program (FCMP), for example, connected families with a case manager and legal support and boasted a 99 percent success rate, as reported by ICE. It cost just $36 a day per family, compared to $319 per day per person for family detention. The Trump administration ended the program in June 2017, but President-elect Biden has pledged to invest in “community-based management programs.” We will fight to ensure that people are allowed to remain with their families and communities while their immigration cases are pending.