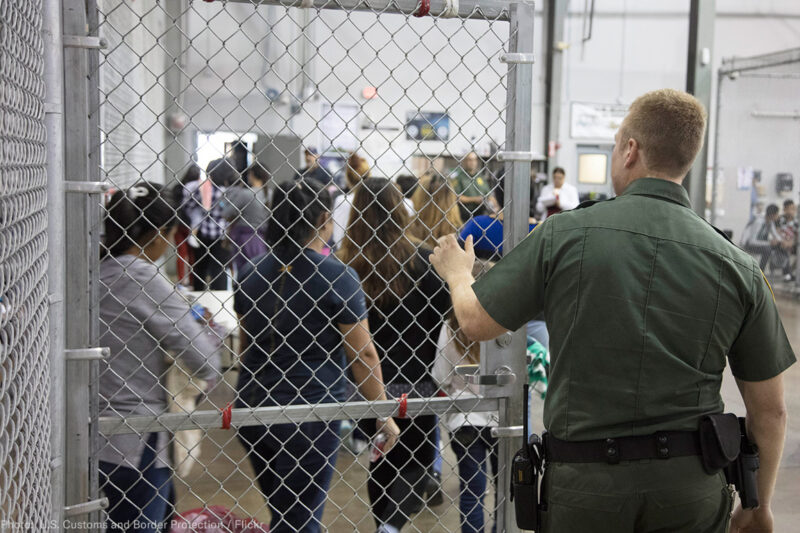 With his hastily issued executive order on family separation on Wednesday, President Trump presented America with a false choice: If you don’t want me to tear infants from their mother’s arms, I’ll just put entire families in jail.

Specifically, Trump directed the Department of Homeland Security (DHS) to keep families in custody “during the pendency of any criminal improper entry or immigration proceedings involving their members.” He also directed the Department of Defense and all other federal agencies to let DHS use their facilities so that family jail space can be expanded as quickly as possible.

Trump’s plan is inhumane and wrong. The American Academy of Pediatrics and other child-welfare experts have found that jailing children and parents can severely damage their physical and mental health, even irreversibly. When President Obama expanded family detention in 2014, his actions were met with swift condemnation from immigrants rights, civil rights, and criminal reform organizations, including the ACLU. A federal court put the brakes on that expansion, applying a longstanding rule that prohibits the detention of children in substandard facilities and favors their release.

Rather than jailing families who are in deportation proceedings, the government should release anyone who is not a flight risk, or whose flight risk can be mitigated by an alternative to detention. Such alternatives are designed to ensure court appearance and compliance with any final court orders, but they do even more — they allow families to live outside prison walls while their case moves through the system. That allows them to more easily find an attorney and prepare their defense — and non-detained immigrants with legal representation are far more likely to win legal relief. It also means that parents can raise their own children as normally as possible, limiting the long-term trauma to the family.

Despite these obvious advantages, in June 2017, the Trump administration canceled the Family Case Management Program, which was run by Immigration and Customs Enforcement (ICE) as an alternative to detention for families seeking asylum. The program operated in five regions: New York City/Newark, Los Angeles, Chicago, Miami, and Baltimore/Washington, D.C. It provided case management, referrals for support services, and legal orientation, in partnership with community-based non-governmental organizations, in order to make sure that vulnerable families’ most urgent needs were met and they had the information they needed to comply with legal obligations.

The Trump administration would have you believe that releasing immigrants while their cases proceed in court encourages them to disappear from the government’s radar. That’s just false. The Family Case Management Program had a 99 percent effectiveness rate — meaning almost every single person enrolled in the program showed up for all immigration appointments and court hearings. And it was fiscally responsible — just $36 per day per family, compared to $319 per day per person for family detention.

And not all families need the level of support provided by the Family Case Management Program. The government still has the option of releasing families on recognizance, bond, or parole while their cases proceed, and it should be doing so when more intensive supervision is unnecessary to mitigate flight risk. In March, the ACLU, Human Rights First, and the Center for Gender and Refugee Studies sued the administration for jailing asylum seekers indefinitely rather than following their own policy and releasing them on humanitarian parole. That case is pending.

The administration must reinstate the Family Case Management Program or other alternatives that provide families with community-based support services. It must use its authority to release families on recognizance, bond, and parole. It must reverse its plan to build new jails for children and their parents. And Congress must refuse to fund family detention beds.

Family separation is a crisis of the Trump administration’s own making — a crisis it is trying to replace with a new one. Jailing thousands of asylum-seeking families is unnecessary and the wrong way forward. If the president thinks his executive order will bring the nationwide outrage over his border policies to an end, he is deeply mistaken.