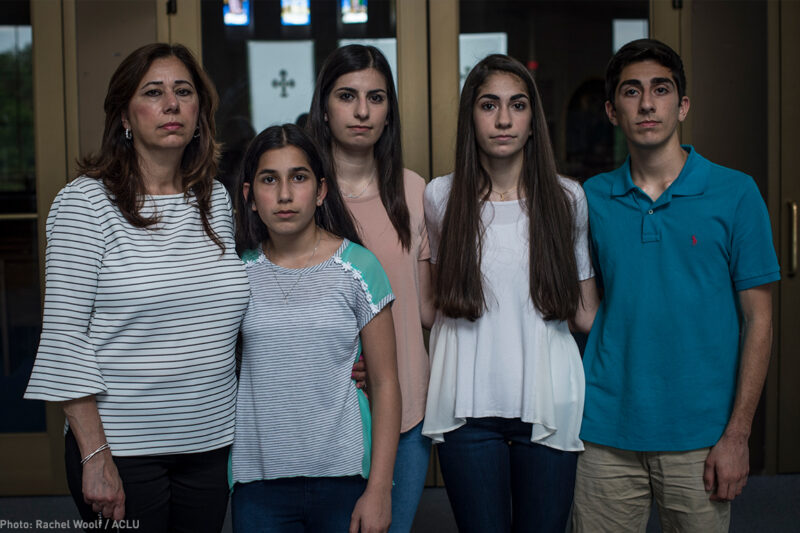 A federal judge in Michigan last night extended a lifeline to more than 1,400 Iraqi nationals across the United States, stopping their immediate removal to Iraq, where they fear near-certain persecution, torture, or death.

Judge Mark Goldsmith granted the American Civil Liberties Union’s request to block the imminent deportation of any Iraqi national in the United States with a final removal order. In doing so, the judge weighed the irreparable harm faced by the detainees versus the government’s desire to deport them as quickly as possible.

“Each Petitioner faces the risk of torture or death on the basis of residence in America and publicized criminal records; many will also face persecution as a result of a particular religious affiliation. While cost and efficiency in administering the immigration system are not illegitimate governmental concerns, such interests pale to the point of evaporation when weighed against the potential lethal harm Petitioners may suffer.”

Since June, Immigration and Customs Enforcement has arrested over 230 Iraqi nationals with final orders of removal and transported these men and women to detention centers all over the country. Although all of the Iraqi nationals arrested in June had received a removal order, some dating as far back as 20 years, the government had not elected to deport them — both for humanitarian reasons and due to the Iraqi government’s resistance to repatriating individuals from the United States. In March, however, the Trump administration made a deal with Iraq: In exchange for removing it from the list of banned countries under President Trump’s Muslim Ban executive order, Iraq would begin accepting deportees from the United States.

The mass arrests were a direct result of this deal. Of the men and women arrested, more than 100 were living in Michigan. Although most are Chaldean Christians, Kurdish and Sunni Muslims have also been targeted. In a rush to deport as many immigrants as possible, ICE failed to consider that Iraqi nationals who have spent years living in the United States face a serious risk of persecution and violence if returned to Iraq.

Deporting people to a country where they are likely to face violent persecution is not only immoral. It is against United States and international law.

Just four days after the mass arrests in Michigan, the ACLU and its partners rushed into federal court seeking a restraining order to delay any deportations to Iraq. Since then, the court issued two temporary stays while it reviewed the case, with the judge noting that the “significant chance of loss of life and lesser forms of persecution” faced by the plaintiffs, “far outweighs any conceivable interest the Government might have in the immediate enforcement of the removal orders.”

Deporting people to a country where they are likely to face violent persecution is not only immoral. It is against United States and international law.

While both the stays and the injunction are victories, they do not end the ordeal for the 1,400 men and women, and their loved ones. Because of the injunction, each detainee will now have a 90-day stay from the time the government provides two key immigration records needed to reopen their cases: their “Alien Files” and “Recording of Proceedings.” Both these records are generally only available through a Freedom of Information Act request, a process that can often take over five months.

Recognizing the burden this put on detainees, the injunction rightly makes the government accountable for furnishing the documents which are in its possession. Judge Goldsmith’s order provides time for detainees to find lawyers, for the lawyers to start gathering documents and seeking protection for their clients, and for the immigration judges and boards to consider each detainee’s case before they are removed to a dangerous situation.

But ICE has not made it easy. Since the beginning of June, ICE has been transferring detainees from one detention location to the next, often some several hundred miles away. This makes it extremely difficult for lawyers to get the information and documents they need to provide meaningful representation.

According to information provided by ICE, of 221 detainees that we obtained information on, only 47 of them are held in the same location as the immigration court where their case will be heard. The process for seeking review in immigration court is time-consuming, and the burden is greatly exacerbated when attorneys are out of state or do not have access to their clients’ immigration files.

Families should not be torn apart and lives lost because of ICE stall tactics.

No one should be removed from the United States to face persecution and violence without a day in court. We will continue to gather information on each Iraqi national detained and work to connect them to an immigration attorney. At the center of Trump’s mass deportation machine are people like Sam Hamama, a Chaldean Christian who has lived in the United States for more than 40 years and has four children who are American citizens. Families should not be torn apart and lives lost because of ICE stall tactics.

It is crucial that every detainee who wants to seek relief in the immigration system has a meaningful opportunity to do so. The U.S. has a long history of protecting vulnerable populations seeking refuge in this country. We must live up to that tradition now.