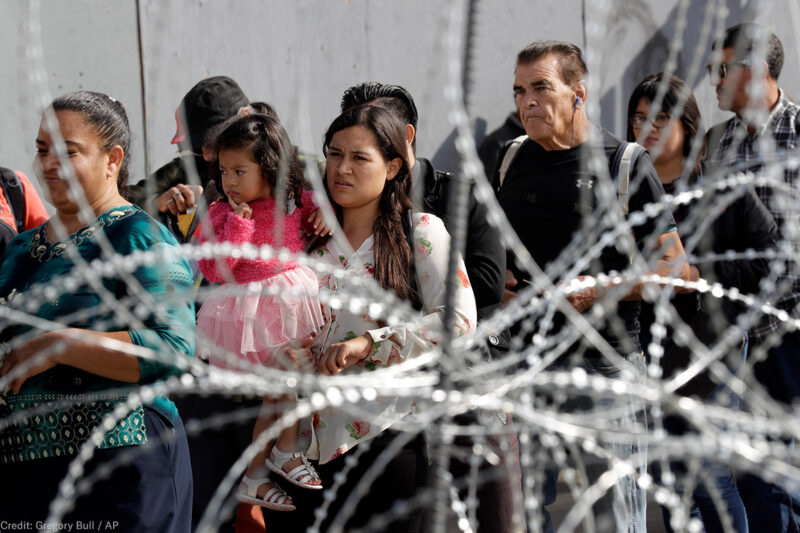 Last September, Bianca* was forced to flee Honduras because her partner’s father threatened to kill her for being a lesbian. Bianca could not go to the police in Honduras because they do not protect LGBTQ people from harm. So she left home to save her life.

After traveling through Guatemala and Mexico, Bianca reached Tijuana, where she got in line to enter the United States through the border station and ask for asylum. After weeks of waiting, Bianca’s number finally came up on Jan. 29. Before last month, after entering the country, Bianca would have been interviewed by an asylum officer to determine if she had a potential asylum claim, and once she passed that, her case would have proceeded in immigration court.

She would only be deported from the United States if she did not succeed in her asylum application — that is, if she could not show that her fear of persecution was well-founded.

However, because of a new Trump administration policy, border officers sent Bianca back to Mexico without even evaluating her request for asylum. They said her immigration court process would go forward in the United States while she was in Mexico, and Bianca would have to return to the border port a few hours before each court date so that she could be brought to court and then dumped back in Mexico to await her next hearing. Unless and until she actually won her asylum case, she’d be marooned in Mexico.

It is extremely difficult for asylum seekers to find a lawyer and pursue their U.S. asylum cases while in Mexico. And many are subject to a severe risk of violence or even death.

The administration calls this new policy the “Migrant Protection Protocols” — but that’s just Orwellian doublespeak. Indeed, the policy has nothing to do with protecting people and everything to do with making it impossible for migrants to get the humanitarian protection that they are entitled to under domestic and international law.

Today the ACLU and its partners filed a lawsuit to block this new policy, which violates our immigration laws; the Administrative Procedure Act, which governs how federal agencies do business; and the United States’ duty under international human rights law not to return people to dangerous conditions.

The administration’s purported basis for the policy is a provision of the immigration laws that allows certain migrants to wait in Mexico or Canada while their immigration case is heard in immigration court. But that law was never meant to apply to asylum seekers like Bianca.

The policy also violates the APA, which prohibits agencies from acting in a way that’s “arbitrary, capricious, or contrary to law.” The policy violates the APA because, like so many of the administration’s immigration policies, it’s based on lies.

For example, the administration claims there’s an immigration crisis at the border. But border apprehensions are near record lows. Kirstjen Nielsen, the Secretary of Homeland Security, has further claimed that the policy will deter people who seek to “game the system” and make fake asylum claims so they can “disappear into the United States.”

But the policy doesn’t even attempt to identify people with fraudulent asylum claims or who will flee the authorities. Indeed, the United Nations High Commissioner on Refugees and others have confirmed that the overwhelming majority of people fleeing from Guatemala, El Salvador, and Honduras have real claims to asylum and other protection in the U.S. And the government’s own data shows that the overwhelming majority of asylum seekers, like Bianca, will show up for court proceedings on their asylum claims.

Finally, the policy violates the United States’ longstanding duty of “nonrefoulement”— our obligation not to return people to places where they will face persecution, torture, or other cruel and inhumane treatment.

Although the administration has tried to give the impression that it won’t return asylum seekers who face danger in Mexico, its actual policy doesn’t back that up. The procedure that is supposed to address humanitarian concerns is a sham. Asylum seekers will be subjected to an unprecedentedly strict screening — without a lawyer, the guarantee of an interpreter, or the opportunity to appeal to a judge — and will only get that screening if they affirmatively assert a fear of return. And even people who can prove they’d be harmed or killed if forced back to Mexico won’t necessarily be exempted from the policy if the threat they face isn’t based on a protected ground, like race or religion, and it doesn’t meet the legal definition of torture.

The result is that asylum seekers like Bianca will be returned to Mexico despite their real need for humanitarian protection. To make matters even worse, extensive reports by intergovernmental and human rights groups have documented Mexico’s practice of detaining and deporting asylum seekers to countries where they face serious threats to their lives and freedom.

This policy is the administration’s latest attack on our asylum system. Instead of facing facts and living up to its legal obligations, the administration is again manufacturing a “crisis” at the border and ignoring our laws for its own political ends. But lies and fear-mongering are not a lawful basis for agency action — especially when lives are at stake.

*Bianca’s name has been changed to protect her identity.