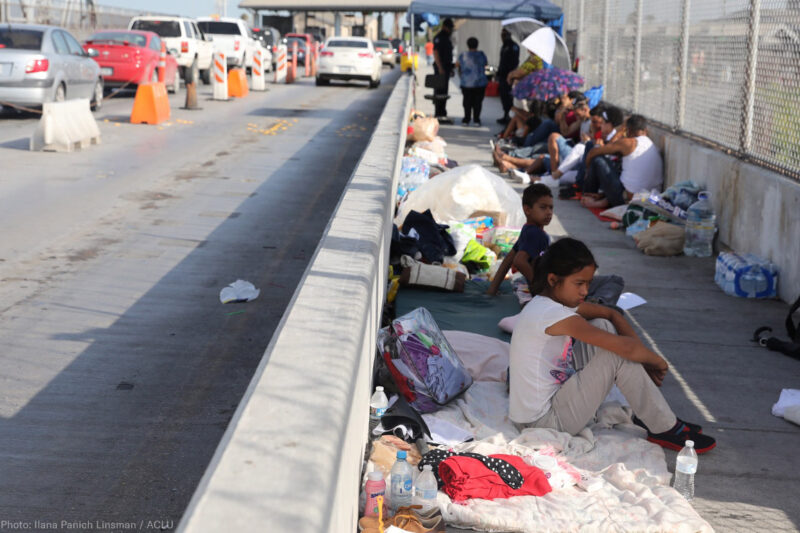 When President Trump announced on Monday that he planned to send some 5,000 military troops to fortify the southern border, even his supporters were quick to dismiss this as a political stunt. A convoy of migrants, many of whom are families with young children fleeing violence, is not a threat to the United States.

There is a crisis unfolding at the border, but it is not the one the Trump administration would have its supporters believe. The real problem at the border is that U.S. Customs and Border Protection (CBP) has been violating its legal obligations and mistreating immigrants — including by refusing to accept legitimate asylum applications.

Although both U.S. and international law dictate that noncitizens arriving at our borders have a right to apply for asylum and other forms of protection, the Trump administration has been routinely turning them away, a policy for which it is already being sued. Since June, CBP has stationed its agents mid-bridge to summarily turn away asylum seekers along the Texas border where international bridges at ports of entry span the Rio Grande. These are the ports of entry that Attorney General Jeff Sessions and Homeland Security Secretary Kirstjen Nielsen have told asylum seekers to go to.

CPB claims that it is at capacity and doesn’t have the personnel to process the asylum seekers, but given the empty waiting rooms we’ve routinely seen, this is difficult to believe. CBP is the country’s largest law enforcement agency and in 2018 it has processed 1.1 million fewer people arriving at our southern border than crossed in the year 2000. At that time, the agency had less than half the budget and at least 10,000 fewer officers.

On October 17, the ACLU received word that the Paseo del Norte Port of Entry had capacity to process arriving families, but agents on the international bridge were still telling families that they were full. When we arrived on site to call out the contradiction, the two border patrol agents blocking 30 families who were huddled on the bridge in freezing temperatures suddenly turned around and walked away, allowing the families to proceed into the port of entry. CBP said it was “a miscommunication.”

The families — which included a group of mothers carrying toddlers — said that CBP told them in Spanish, “You cannot pass, there is no room.” One mother recounted an agent telling her, “I don’t care about your child, many younger kids have come and we don’t let them pass.”

Several families camped out on the bridge that day had narrowly escaped kidnapping the night prior and feared their fate if U.S. agents forced them off the bridge back into downtown Ciudad Juarez. It is not an idle fear. CBP has been working with its Mexican counterpart to do its dirty work — Mexican agents have been removing waiting asylum seekers from the international bridges.

Such coordination not only breaks international law, it exposes vulnerable migrants to the extreme violence and frequent kidnappings in border towns like Reynosa. Lawyers in south Texas are taking their concerns to the Inter-American Commission on Human Rights with a complaint detailing the dire consequences of CBP’s policies and Mexico’s role in the matter.

For months, the ACLU and other organizations have been asking CBP to clarify why it is refusing to process asylum seekers at the border. We have inquired at all levels of CBP, from port supervisors to Commissioner Kevin McAleenan himself. We have received only amorphous, vague responses.

So on October 29, we filed a Freedom of Information Act (FOIA) request seeking immediate answers to basic questions about CBP’s policies at international bridges. What is the agency’s capacity to process asylum seekers at ports of entry? Are agents even counting how many asylum seeker they are turning away to inform what capacity they need? These questions, among many others, must be urgently answered if we are to hold government agents accountable for turning back refugees to dangerous conditions and possibly death.

CBP must comply with U.S. and international law and process all asylum seekers if it truly believes we are a nation of laws and if it wishes to maintain any level of integrity as a federal agency.