The Trump Administration Is Preventing Detained Immigrants From Practicing Their Religion 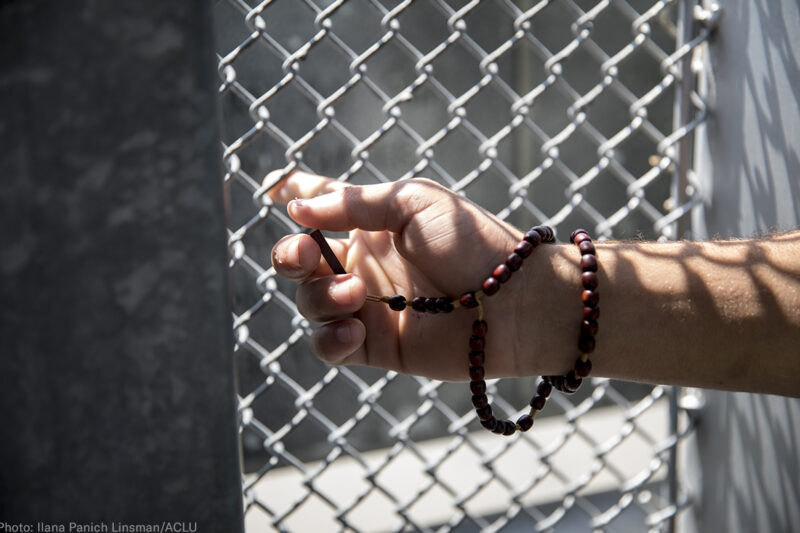 Amid the chaos of family separations and zero-tolerance policies being implemented at our borders, Immigration and Customs Enforcement decided in early June to begin transferring immigrants to prisons operated by the Federal Bureau of Prisons. Their appalling treatment in these prisons reveals, yet again, the depraved cruelty of this administration toward immigrants.

On Wednesday, with our co-counsel partners — the Prison Law Office and the Civil Rights Education and Enforcement Center — we sued the Trump administration, ICE, and the BOP for violating the constitutional rights of immigrants currently detained at one of those federal prisons in Victorville, California. We are asking the court to order ICE to immediately remedy the unlawful conditions and ultimately remove immigrants from the prison.

The Victorville prison is in a remote location in the California desert, two hours outside of Los Angeles, far from community support and legal services. It is an enormous complex of concrete buildings surrounded by fencing and barbed wire. The immigrant men who are detained there wear orange and brown prison jumpsuits, but most have not been convicted of, or even charged with, a crime. They are merely seeking relief under U.S. immigration laws — as is their legal right.

Their movement is highly restricted. They are detained two to a cell, confined indoors for most of the day with little opportunity for exercise or exposure to sunlight. Their “meals” are often inedible: spoiled milk and meat that is infested with worms and maggots. The food is nowhere near adequate to sustain them.

When they arrived at Victorville, the detained immigrants were not provided a change of uniform or underwear for several weeks. Some recount how they had to wash their underwear in the toilet in their cell with a small bar of soap that was also to be used for washing themselves.

Medical and mental health needs are ignored, an especially dangerous situation for those who have fled persecution or torture in their home countries. Poor hygiene and medical neglect are so extreme that there have been outbreaks of chickenpox and scabies. When the men try to seek medical help, they are often dismissed, mocked, and verbally abused by staff who threaten them with isolation and other punishment.

Communication with the outside world is severely limited. The men do not have access to legal materials, and the most basic information is provided solely in English, a language that the majority of the men do not speak. They were only allowed to consult with attorneys after the ACLU of Southern California won a court order granting access to the detainees.

As if these conditions were not appalling enough, prison officials have denied the men one of the few things that might bring them some comfort or peace of mind: the ability to practice their faith. Victorville officials have refused to provide religious services or other opportunities for group worship and prayer. By policy, the men are not allowed to worship outside of their cells. Prison officials also have not provided meals that fully comport with their religious beliefs, forcing them to eat food that violates their faith or go hungry.

Officials confiscated immigrants’ religious items, including religious clothing and holy books. For example, Sikh immigrants had their turbans taken. They have not been able to regain access to them or obtain replacements, even though wearing a turban is one of Sikhism’s most sacred religious practices. Another immigrant had his Bible seized and has likewise been unable to procure a replacement. These violations of religious rights persist, even though the BOP’s and ICE’s own regulations recognize the right to engage in these religious practices.

Let’s be clear: No one — not even those convicted of crimes — should be subject to these shocking conditions of confinement. Many of the men report that they feel depressed and that they never expected that this could happen in America. The situation is so dire that some have engaged in self-harm, while others simply abandon their legal claims because the abuse is too much to endure.

Despite all that these people have gone through, an ICE agent told one of our clients “to think of Victorville like a hotel.”

But the problem isn’t limited to Victorville. At the Sheridan Federal Detention Center in Oregon, another BOP facility, immigrants likewise suffer from lack of access to counsel and other unconstitutional conditions, which are being challenged by the ACLU of Oregon and the Federal Public Defender. The ACLU and ACLU of Oregon filed a brief on Wednesday with the Oregon federal district court, supporting a request for an emergency order directing prison officials to allow the immigrants incarcerated at Sheridan to practice their religion while they are confined.

The men at the Victorville and Sheridan prisons are detained under an agreement between ICE and the BOP, allowing for the detention of 1,600 immigrants in BOP facilities in Washington state, Oregon, California, Arizona, and Texas. While ICE uses its own network of prisons and jails to detain immigrants, the move to transfer immigrants to BOP facilities at this level is unprecedented.

Before these transfers started, federal prisons like Victorville were used to incarcerate those who have been convicted of crimes — and the BOP did a poor job of that. Over the years, the Victorville prison has been plagued by a number of problems, including understaffing that has led to dangerous conditions for those incarcerated there.

BOP officials themselves have acknowledged that the situation in these facilities is untenable. Some BOP employees have reported that they were not provided adequate notice that hundreds of immigrants would be transferred to BOP facilities, which were unprepared to handle a sudden influx of people or the particular needs of this population. While reports initially indicated that the use of federal prisons for immigrant detention was a temporary, 120-day arrangement, the contracts between ICE and BOP will last a year.

The harm resulting from such imprisonment is profound. Many of the immigrants detained at Victorville and Sheridan may suffer medical and mental health effects years or even decades after they are released.

None of this had to happen.

Like the Trump administration’s family separation and zero-tolerance policies, these transfers were made in reckless haste, with no regard for the well-being and lives of the immigrants who are detained. President Trump and ICE might not care about them, but we do.