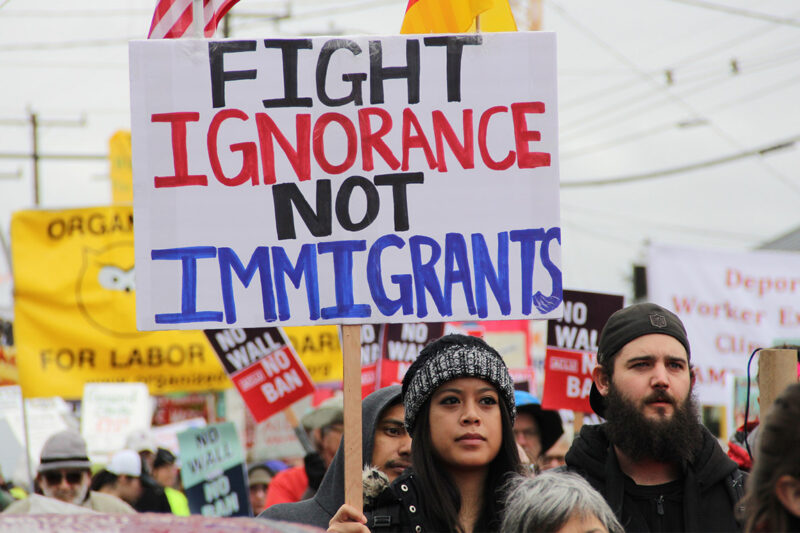 The Trump administration yesterday announced its plan to admit 18,000 refugees this fiscal year, taking another step in its agenda to dismantle the program that has long provided protection for people and families seeking safety from persecution. This sickening announcement is consistent with Trump’s attacks on refugees, Muslims, and immigrants across the board — particularly those who are Brown or Black.

The U.S. has long been a global leader in refugee admissions. By the end of the Obama administration, the United States’ annual refugee admissions ceiling was 110,000 — and many felt it should be higher in light of multiple international crises that were causing many people to flee their homes. Given that many of these crises were in Muslim-majority countries like Syria, and that some Muslim communities, like the Rohingya in Myanmar, were being specifically targeted for persecution, nearly half of refugees admitted to the U.S. at the time were Muslim.

While crises around the world continue, the Trump administration has consistently and significantly reduced refugee admissions, lowering the previous 110,000 admissions ceiling to 45,000 in fiscal year 18; 30,000 in FY 19; and now to 18,000 in FY 20. This is consistent with their targeting of Black and Brown people, including Muslims whose admissions dropped to 17 percent in the first half of FY 18 (as compared to the then 63 percent Christian admissions). In addition, only 62 Syrians were admitted in FY 18 — a 99.05 percent decline from FY 17 to FY 18.

These attacks on those seeking our help through the refugee program have extended to individuals seeking asylum. The asylum program, like the refugee admissions program, is intended to help those seeking refuge from persecution. While those applying for refugee status apply from abroad, those seeking asylum apply in the U.S. In fact, many are making claims at our southern border and others are already living in the United States.

The substance of the claims is the same — people in need, calling for our help, asking that we welcome them so that they may survive. These humanitarian programs are a part of our immigration laws and are the country we strive to be.

But the administration disagrees, and is trying to unilaterally erase these protections. Just recently, for example, the administration abruptly announced that individuals, other than Mexicans, at our southern border can’t get asylum here unless they apply for protection in a third country and are rejected there. This directive could virtually shut down a large part of the asylum system. It has been challenged in an ACLU lawsuit and found unlawful by multiple courts, but is currently being implemented while the litigation continues.

With that policy and yesterday’s announcement, Trump continues the legacy he began with the Muslim ban, betraying communities and implementing discriminatory and hateful policies. The original Muslim ban included a ban on refugees. Even once the administration split the Muslim and refugee ban into two orders, the targeted countries for the refugee ban were almost entirely Muslim-majority countries. And now, the administration’s minimal number of refugee admissions is another part of Trump’s systemic effort to dismantle our humanitarian programs and further eliminate admissions of Muslims, Black, and Brown people.

Trump is doing everything he can, whether through policy or early morning Twitter rants, to send people back to the “places from which they came” or prevent them from coming at all. His rhetoric and his policies are consistent — spreading the message that Congresswoman Omar, a U.S. citizen, is less than American, while simultaneously dismantling the refugee process through which she came to the U.S.

There is a Muslim ban in place, the administration has slowly but surely put forward policies to dismantle the asylum process, and visa numbers for Brown and Black immigrants have dropped significantly in the employment and family-based system. The agenda is clear.

The implementation of these discriminatory policies and processes are as revolting as Trump’s rhetoric and attacks on people of color and other marginalized communities. These attacks are part of the fabric of this administration and cannot be viewed in isolation. They are part of his anti-immigrant agenda to turn our backs on those in need. That may be Trump’s version of America, but it’s not ours. And we won’t stop fighting until our country reflects the humanity, diversity, and justice for which we strive. This is our America.