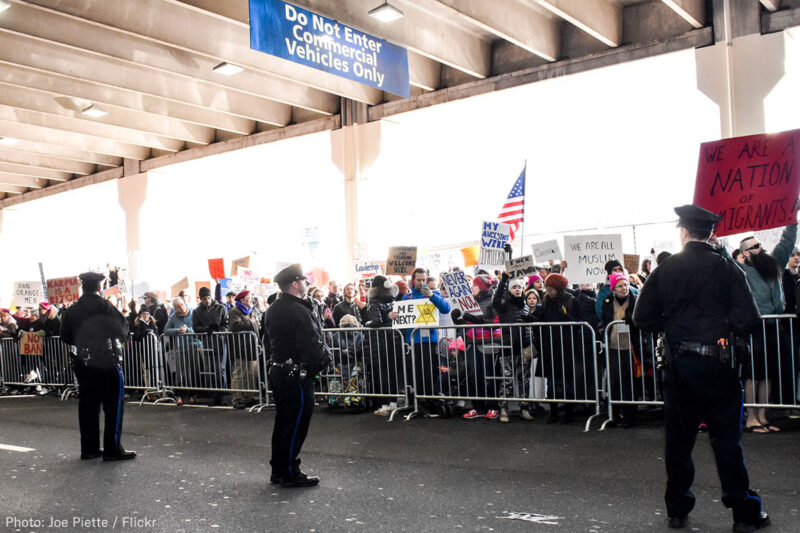 October 24 should have marked the end of President Trump’s 120-day ban on refugees entering the United States, a lesser known but no less damaging part of the Muslim ban executive order from March 6. Instead, it will be remembered as a new low in the Trump administration’s response to the world’s growing refugee crisis.

Under the guise of furthering national security, the administration announced new restrictions on certain groups of refugees. As a result, citizens of 11 countries — as well as the minor children and spouses of refugees in the United States — will be placed on hold and barred from resettlement, while the government undertakes yet another round of reviews. In a memo from the Department of Homeland Security and the State Department, the government imposed a 90-day review period on countries already requiring additional security checks, during which time refugees from those 11 countries cannot be resettled. Additionally, the “follow-to-join” program for close relatives of refugees already in the U.S. has been paused indefinitely until further review, barring refugees from reuniting with their spouses and minor children.

These new restrictions are entirely unnecessary, and will come at a very real human cost. Consider the existing vetting process for refugees seeking safety in the United States.

The length of processing in the United States Refugee Admissions Program already averages 18-24 months, but as we know from our casework, individual cases can often take much longer than that. Before someone is even invited to interview with United States Citizenship and Immigration Services (USCIS), the Department of State’s Resettlement Support Centers conduct a prescreening background check. This includes a name check via the Consular Lookout and Support System (CLASS), which contains information from the Department of State Department as well as from the National Counterterrorism Center and Terrorist Screening Center’s terrorist watch lists, the Department of Homeland Security’s TECS database, Interpol, the DEA, the FBI, and the Department of Health and Human Services.

Then USCIS collects fingerprints and begins conducting biometric checks, which include the databases of the FBI, the Department of Homeland Security, and the Department of Defense. Trained USCIS officers conduct interviews to determine whether a refugee is credible, whether there is any fraud, whether they meet the refugee definition, and whether they are admissible to the United States or inadmissible for reasons such as national security or past criminal activity.

Throughout the process, there are continuous “Interagency Checks,” which screen the biographic data of applicants 14 years of age and older through U.S. and intelligence community partners’ databases.

If any national security concerns surface through the lengthy period of refugee processing, whether from interviews or security and background checks, USCIS conducts an additional review. No applicant is approved for resettlement until any security concerns are resolved. Further, U.S. Customs and Border Protection provides its own review of approved refugees, conducting further background checks prior to and upon arrival before anyone is formally admitted to the United States.

As 20 of the nation’s top national security experts, former government officials, and military leaders wrote in a letter to Congress in 2015, “[Refugees] are vetted more intensively than any other category of traveler, and this vetting is conducted while they are still overseas.”

In fact, for certain applicants from countries deemed higher-risk, prescreening already includes a higher-level “Security Advisory Opinion” (SAO) check, which must be received and considered before a decision on whether to admit a refugee can be finalized. These SAO checks have been put on hold by the administration until a further review has been conducted. Given the SAO backlog and the lack of an established deadline for SAO results, these changes will create needless and significant delays for those in this overly broad category.

The administration has yet to provide any concrete evidence that refugees pose a threat to the United States or are in any way detrimental to U.S. interests at home or abroad. And what we do know paints an entirely different picture. A 2016 study by the Cato Institute found that refugees resettled over the last 30 years were among the foreign-born categories who are least likely to be involved in terror attacks on U.S. soil. Moreover, refugee resettlement is a crucial component of U.S. foreign relations. It not only fosters strong relationships with allies, but it counters the narrative offered by extremists who say that the West is at war with Islam. Among those left in indefinite limbo are thousands of Iraqis who worked for the U.S. military.

Like all Americans, we at IRAP welcome improved security procedures that are efficient, effective, and enacted in good faith. But the administration’s new rules are not appearing in a vacuum. They are just one more added layer of restrictions imposed on the most vulnerable individuals who have no other choice to live safely but to be resettled.

On the campaign trail and after his inauguration, the President has targeted refugee resettlement, even during some of the worst moments in the Syrian conflict. His Muslim ban executive order temporarily banned all refugees and aimed to lower refugee admissions during the previous fiscal year by more than half. Late last month, he went even further, limiting the number of refugees to be admitted to an unprecedented 45,000. These policies immediately impacted the U.S. refugee resettlement process and thus thousands of refugees in life-threatening circumstances, many of whom had already been waiting for years to even get this far.

The new vetting guidelines will devastate the resettlement program even further, by causing egregious delays and denials. Rather than serve a national security purpose, these rules undermine our values as a country and leave vulnerable refugees in limbo. We at IRAP know who these refugees are: survivors of sexual violence or torture, children with medical emergencies, families fleeing religious or political persecution, and Iraqi allies who have come under threat due to their work with the U.S. government. We know their stories, and we will therefore never give up fighting for their right to safety.