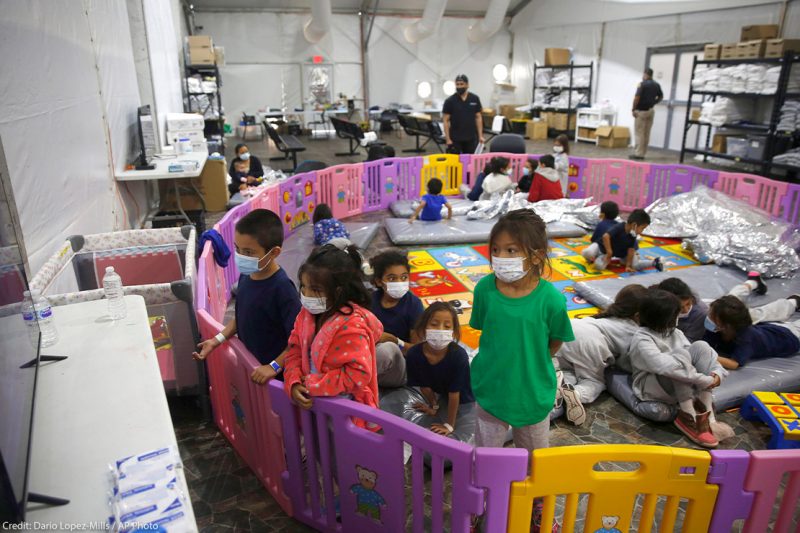 Emergency steps were needed to remove children from Border Patrols facilities, but the Biden administration must now ensure the humane treatment of all migrant children in Texas.

“A Border Patrol facility is no place for a child,” said Homeland Security Secretary Alejandro Mayorkas in March 2021 as unaccompanied children — many trapped in dangerous circumstances by Trump era policies — began crossing the border in increasing numbers due to the backlog created by President Trump’s shutdown of asylum.

We could not agree more.

To address this unacceptable and life threatening reality, the Biden administration moved quickly to set up emergency intake site (EIS) facilities to get children out of Border Patrol custody and transfer them to the Department of Health and Human Services (HHS) — the agency tasked with uniting children with sponsors in the United States. However, the administration’s efforts to protect the well-being of unaccompanied children requires further action to ensure humane conditions in these new facilities. Particularly in Texas, where migrant children have become the latest target of Texas Gov. Greg Abbott’s political boondoggle.

One of the largest EIS facilities was quickly constructed on Fort Bliss in El Paso, Texas, with an eventual capacity to hold some 10,000 children. Over 5,000 children were quickly moved to the Fort Bliss facility, despite a lack of case management services and housing conditions consisting only of massive tents holding upwards of 1,000 children each.

We toured the facility in April 2021, shortly after it opened, and again in May 2021. While we observed the masses of children housed in football field sized tents, noted the deficiencies in case management resources to reunite children with loved ones, and worried about the children’s health in the west Texas desert heat, we were not allowed to speak to children to get a full view of their experience.

In late May 2021, Rep. Veronica Escobar was able to speak with children held at Fort Bliss. Shockingly, children she spoke to had languished in the facility for over 40 days, boys reported only having one change of clothes, and children desperately sought updates on the status of their cases.

Declarations filed in court this week by Flores counsel included one 13-year-old girl held at Fort Bliss for 58 days, and data indicates that some 100 children had been at the site for over 60 days, some since it opened on March 30, 2021. Employees reported the level of distress among children at the facility was so alarming that children are constantly monitored for self-harm, panic attacks, and escape attempts. Federal officials have reportedly banned pencils, pens, nail clippers, and regular toothbrushes out of concern that children would harm themselves.

The Biden administration must do better. To start, the administration should ensure basic standards are met at all EIS facilities. At minimum, HHS should immediately hire more case managers to reunite children, expand capacity at non-EIS licensed facilities, and co-locate HHS personnel in Border Patrol facilities to evaluate for release to sponsors prior to transfer to EIS facilities. Independent medical and child welfare experts should be consulted to ensure improved conditions.

Instead of supporting the administration’s efforts to improve the health and safety of these children, Texas is actively attempting to worsen care for children. On June 1, 2021, Abbott issued a proclamation targeting unaccompanied children by potentially shutting down licensed federal shelters for vulnerable children, further obstructing efforts to improve conditions for children in Texas.

Texas is home to approximately 30 percent of all state licensed shelters contracted to house unaccompanied children, according to a 2020 report. Requiring shelters to be licensed has historically provided for more humane and child appropriate conditions for youth waiting to reunite with sponsors. By potentially undermining federal efforts to move children to safer facilities, and out of EIS facilities like Fort Bliss, Abbott is placing children directly in harm’s way by shutting down facilities better equipped to care for children.

The Biden administration’s efforts to respect the rights of children, protect them from the horrors of Border Patrol custody, and reduce the number of children held at Fort Bliss are laudable aims, but it is past time to ensure humane conditions for children at Fort Bliss and other emergency facilities.

The Biden administration must stand steadfast in its commitment to children and find humane alternatives that do not result in longer stays in Border Patrol custody. And if Abbott’s effort succeeds in limiting licensed bedspace in the state, the administration must weather the political storm without sacrificing standards for the care of unaccompanied children in Texas.