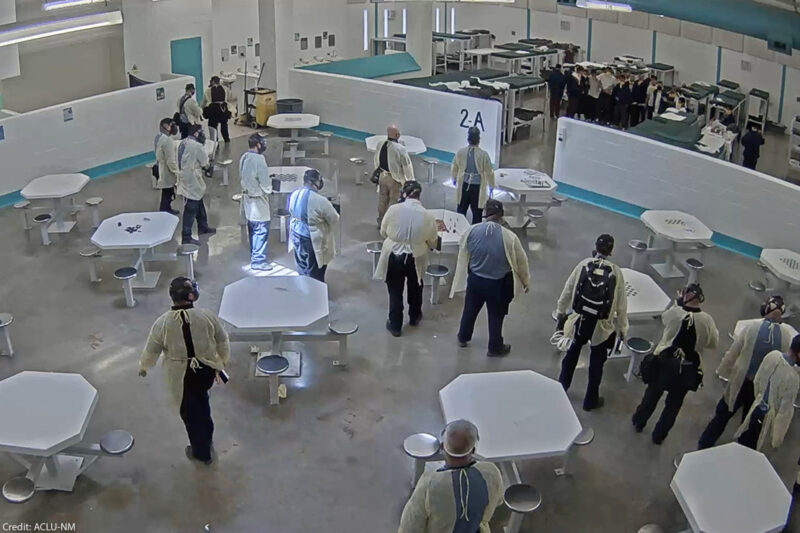 An inspection found Torrance County Detention Center was failing to meet the basic needs of people detained there.

This piece originally appeared on the ACLU of New Mexico’s blog.

The privately-run ICE detention center in Torrance County, New Mexico failed its government inspection earlier this year, with a newly released report finding severe understaffing, unsanitary food, and visitation rules that were inaccessible to people with no money, among other complaints.

The failed inspection is the latest in a series of troubling news for the Torrance County Detention Center, which earlier this year reported a massive COVID-19 outbreak among detainees and staff, as well as reports of guards using harsh chemical agents in response to a peaceful hunger strike protesting conditions at the facility.

The Torrance detention center in Estancia, southeast of Albuquerque, detains male migrants for ICE and the U.S. Marshals Service, as well as men and women for Torrance County. It is managed by CoreCivic, a private for-profit prison corporation based in Nashville, Tenn. The inspection was conducted from July 27 through 29 by The Nakamoto Group, a private contractor that inspects ICE detention facilities. ICE has 60 days from the completion to post the results online.

Allegra Love, an attorney with the El Paso Immigration Collaborative who has worked with detained migrants at Torrance and other ICE facilities, said The Nakamoto Group inspections are notoriously friendly to the facilities and failures are rare.

“I’m surprised that they failed the inspection because I’ve worked in detention centers for the last seven years and they’re all really terrible,” Love said. “You’re never at one that is good or that treats their detainees well, but they all pass their inspections.”

ICE and CoreCivic did not respond to requests for comments about the inspection, which found the facility “does not meet standards.”

During their July review of Torrance, The Nakamoto Group inspectors found 22 deficiencies in how ICE detainees were held, including four categorized as deficiencies in priority components.

“This is not a greenhouse or coffee shop. They’re in charge of people’s well-being and safety.”

Among the most concerning for Love is severe understaffing. Although not a specific deficiency, inspectors noted that “the current staffing level is at 50 percent of the authorized correction/security positions. Staff is currently working mandatory overtime shifts.”

Love said she’s had trouble connecting with a client at the facility, with a staff member saying it would take two weeks just to schedule a legal call. Lack of staff, she said, is a security concern.

“This is not a greenhouse or coffee shop,” she said. “They’re in charge of people’s well-being and safety.”

Twelve of the complaints cited by investigators focused on food preparation, including safety and sanitation concerns with how food was prepared and presented. Food service should be “under the direct supervision of an experienced food service administrator,” the report said. Inspectors also found the facility’s dishwasher wasn’t hot enough to actually sanitize dishes.

That didn’t surprise ​​Ernesto Rodrigo Callado, who was detained for 10 months at Torrance and even worked in the kitchen for a time. The food, he said, was often flavorless and undercooked and was a constant source of complaints.

“The beans were hard, you could throw them at the wall three times and if you kept going you’d break the wall,” Callado said. “They made rice that tasted like going to the yard and eating dirt.”

He said except for a few dishes he tried to prepare his own meals and buy food from the commissary instead.

Alvaro, who asked that his real name not be used for fear of retaliation from immigration authorities, said he also worked in the Torrance kitchen and noticed food that smelled bad. People often had stomach aches that he attributed to the food.

“Just because we’re immigrants doesn’t mean we have to eat like dogs,” he said.

Inspectors also found deficiencies in visitation access. During the COVID-19 pandemic, the facility replaced general in-person visits with paid video calls through tablets, making them inaccessible for detainees without money.

Callado said the tablets were often slow to load and even just waiting for a photo his family had sent him to load could quickly become unaffordable.

The report also noted grievance paperwork and medical grievances were not being maintained properly in detainees’ files and directed the facility to ensure grievances are filed as required. ICE received 43 grievances from detainees at Torrance in the year leading up to the late July inspection, two-thirds of which have been substantiated.

The two other ICE detention facilities in New Mexico, in Otero and Cibola counties, passed their inspections from The Nakomoto Group in January and May respectively.

The ACLU previously called for the closure of the Otero County Processing Center for its long history of inhumane treatment, including denial of access to medical care, retaliatory use of solitary confinement and more. And last year Reuters uncovered numerous unanswered calls for medical attention, inadequate mental health treatment and quarantining procedures and more at Cibola County Correctional Center’s now-closed transgender detainee unit.

Earlier this year, the ACLU of New Mexico filed a lawsuit alongside the New Mexico Immigrant Law Center on behalf of nine former Torrance detainees and the Santa Fe Dreamers Project against CoreCivic and Torrance County. The lawsuit alleged CoreCivic sprayed the men with chemical agents in response to a peaceful hunger strike. The men were protesting inadequate precautions against COVID-19, poor living conditions, and the withholding of status updates on their immigration cases.

Zoila Alvarez Hernández, an immigrant rights attorney at the ACLU of New Mexico, said The Nakamoto Group was correct to fail Torrance after all of the issues at the facility.

“I’m pleasantly surprised that a third-party vendor that (ICE) contracted actually did their job and reported it,” she said. “However, I am not optimistic that CoreCivic and Torrance County will take corrective action to address the deficiencies that were pointed out in the inspection.”

“Why are they still there if we can’t meet their very, very, very basic needs?”

In late May, the Santa Fe New Mexican reported a COVID-19 outbreak at the facility, which by then had infected 110 detainees and 16 staff members. There have been 370 COVID cases among people detained by ICE at Torrance, according to the federal agency.

For Love, that raises the question of why detainees were sent to Torrance if it wasn’t adequately staffed, among the other deficiencies noted in the inspection.

“Why are they still there,” she said, “if we can’t meet their very, very, very basic needs?”