At US Ports of Entry, the Government Is Denying Asylum to Those Seeking Refuge 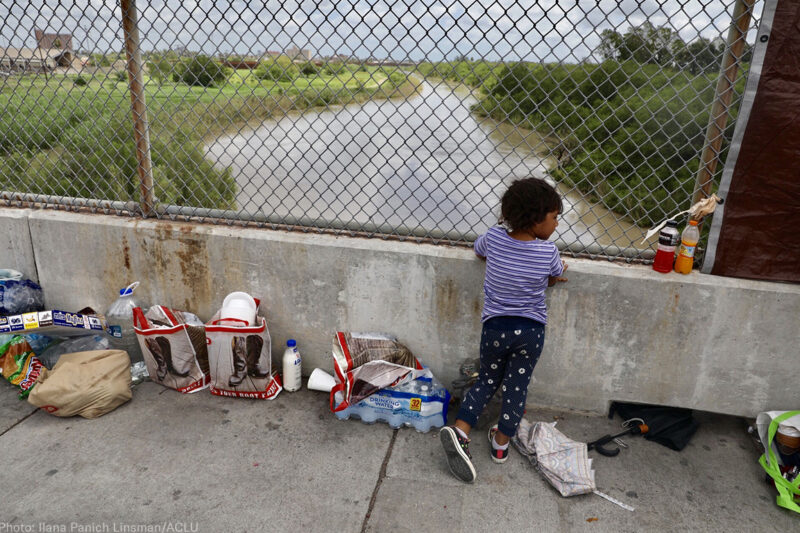 Good things don’t always come to those who wait.

This is the harsh reality of asylum seekers who have recently reached our ports of entry and are turned back by U.S. officials, only to wait indefinitely for a chance at refuge in America that may never come. Notwithstanding the recent change in U.S. policy on family separation, the outlook for asylum seekers at the border remains bleak. Despite the Department of Homeland Security’s claim that it’s a “myth” that the U.S. is turning asylum seekers away at ports of entry, our team at the border has witnessed officials doing exactly that.

By June 12, 29-year-old Laura and her 6-year-old son Nicolas had been sitting on the hot sidewalk of the Brownsville-Matamoros International Bridge for three days, just 20 feet away from a plaque that marked the international boundary line between Mexico and the United States. Sitting in the shade of a jury-rigged bit of canvas, Laura explained that she had left her native Honduras, intent on escaping her violent husband, a police officer who would beat her with impunity because pleas to her government were ignored. She had made her way through Mexico, heading to Matamoros where she had hoped to cross into the U.S. through a port of entry to apply for asylum.

Laura had heard that the United States had begun separating parents from their children, but she believed that coming through a port of entry would protect her and her son from that new form of government-sanctioned terror. Laura obviously had not heard that she could still have Nicolas taken from her at the port of entry, as has happened to a number of families over this past year based on criteria of ineligibility to stay together, like suspicion of smuggling, that CBP refuses to release or to consult with child welfare experts about.

Laura’s hopes and good intentions ran into a gauntlet formed by three U.S. Customs and Border Protection officers standing just on the U.S. side of that boundary marker. The officers were stopping and turning away anyone who had intended to request asylum from entering the United States.

“They keep telling me to go come back later, that there is no room for people like me (asylum seekers), and that I should try again in five or six hours,” Laura explained. “But I have been here for three days, along with these other people waiting here, and no one gets in.”

Although a stiff breeze from the Gulf swept across the bridge, the heat was sweltering and the sun merciless. There were no water fountains or restrooms. Laura and the other families camped out on the Mexican side of the boundary were depending upon the kindness of strangers for their necessities. The people waiting on the bridge were miserable, and they were becoming desperate. One supervisor, when confronted about a mother and child who had been sitting on the bridge for days, candidly admitted, “I don’t really care.” Other CBP officers acknowledged that a supervisor, in fact, can allow an asylum seeker to cross the boundary line.

More than six weeks have passed since Laura and Nicolas were sitting on that bridge, just a couple of feet from Brownsville. We do not know what has happened to them or to the others who were enduring the hellish misery over those long days. Perhaps, in the end, Laura had been let through the bridge checkpoint and allowed to make her application for asylum. And perhaps she and her son were allowed to be together, or maybe they were separated. Maybe Jeff Sessions and Kirstjen Nielsen’s underlings forced Laura into the Sophie’s choice of choosing to be deported with her son or to be separated from him. Perhaps Laura gave up on coming into the U.S. at the port of entry and took her chances by crossing through the river. The uncertainty can drive an advocate mad, but it pales to the agony these families go through.

In the days just prior to the July 26 deadline to reunite separated families, there were five families waiting in the sun at the Brownsville/Matamoros port. In other ports of entry, like Roma, Texas, CBP officers are telling advocates that there were no asylum seekers waiting for entry because Roma is no longer a “designated port.” Yet, when asked by advocates which ports are designated for entry by asylum seekers, CBP headquarters in Washington says that all are — it merely prefers that asylum seekers go to the “bigger” ports. CBP also says the “backlogs” are because they don’t have the capacity to hold or process asylum seekers, but when asked about its capacity, it cannot give a straight answer. And CBP is still taking days to process asylum seekers even when their offices are empty.

Over the border, in Mexico, advocates have noticed that Mexican immigration agents are stopping individuals and families they suspect of being asylum applicants to review their paperwork. If an immigrant does not have papers allowing lawful presence in Mexico, they are detained and put into deportation, even if valid papers may have been lost or stolen during the immigrants’ passage through Mexico. Two Mexican agents admitted to one advocate that they were “doing dirty work for the US” in keeping families from presenting themselves to US officials.

CBP needs to clarify for the public and the nongovernmental organizations what its protocols are, and what guidelines it abides by. Congress should hold a hearing to inquire about CBP’s actions to refuse and delay asylum applications at ports of entry.

The government’s “stick and stick” approach has only one goal: to inflict enough agony and misery on these already terrorized families to deter them from seeking asylum, no matter how they come to the United States.