This Is What Immigration Enforcement Looks Like Under President Trump 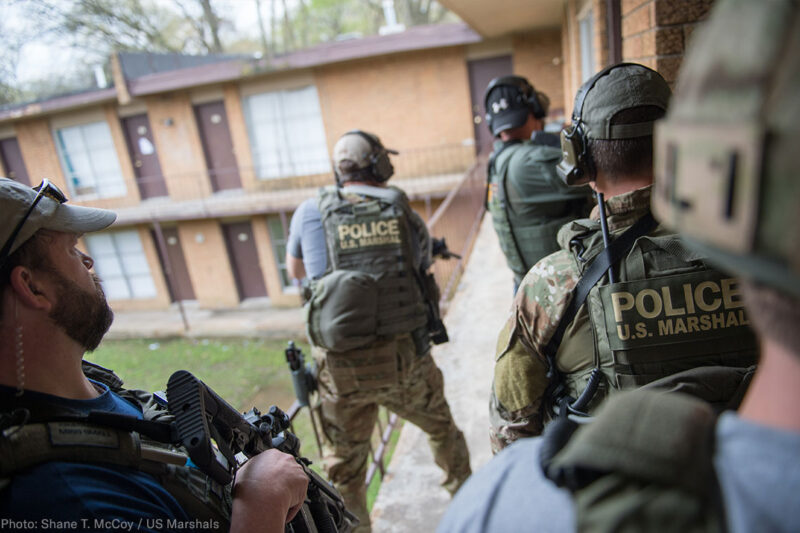 Around noon, on April 10, 2017, Alicia Amaya Carmona glanced through her partially closed blinds at the Wing Pointe apartment complex in Heber City, Utah. What the 48-year-old grandmother saw terrified her.

Frightened, Carmona came out of the master bedroom into the living room with her hands up. Her four grandchildren, all U.S. citizens, stood behind her, screaming and crying out of fear. The men pointed their assault weapons and pistols at Carmona and the children. First, Carmona was ordered out of the apartment and told she could not touch nor speak to her grandchildren. The children, all barefoot, were then ordered out of the apartment, too. The temperature was in the 40s.

The heavily armed men, members of Immigration and Customs Enforcement (ICE) and the U.S. Marshals, finally let Carmona know why they were there. They were after Carmona’s husband, Abel Ramirez Sr., who had been indicted for illegal reentry six years before. Illegal reentry is not a violent crime, yet the family saw this group of federal officers armed for war burst into the apartment without a warrant.

Carmona told the men she didn’t know where her husband was. The men arrested her, even though she had done nothing wrong and had no criminal record. They told her that they would put her grandchildren in state custody if she didn’t get her sons to come home immediately. When her son Eduardo Ramirez — who had status under the Deferred Action for Childhood Arrivals (DACA) program — arrived at the apartment, the men detained him, too. They clasped the handcuffs so tight that they left marks around his wrists that remained for over a month.

Soon Alicia’s other sons Abel Jr. and Carlos, also DACA recipients, arrived home from work to find their brother and mother in handcuffs. Then Carlos’s wife, Berenice, arrived home from work. Also a DACA recipient, she saw an agent holding her terrified and crying two-year-old daughter J.R. while claiming he couldn’t “control” her. The agent put the child down outside and when Berenice picked the child up, another agent ordered her to not come near any of her children or the other members of her family.

Eventually, the agents released Eduardo, but they took Alicia into custody. As one agent told Carlos, they “had to take somebody.” When Carlos and Berenice returned to their apartment, they found it ransacked. Blankets and clothing were everywhere. Closet doors were off their hinges.

The day was over. The family was traumatized. But their nightmare was far from over. Early the next morning an ICE agent called Carlos to tell him he could “trade” Carmona for information about the location of his father. The agent continued to pressure Carlos to give up his father by sending repeated text messages during the day. When Carlos stopped responding, the agent sent him single-word message: “congratulations.”

Later that night even more officers from ICE and the U.S. Marshals returned to the family’s apartment. This time they came with a battering ram. Around 10 p.m., the apartment door burst open. The men entered the dark apartment, screaming at Berenice and her children with their weapons trained on them. They then forced Berenice out of the apartment for questioning about her father-in-law. Once again, they didn’t have a warrant, though they shouted they had one before breaking down the door.

Eventually, Carlos, Eduardo, and Abel Jr. arrived. One of the agents told them that they were wasting their money fighting their mother’s detention. They couldn’t win “against ICE” with “Trump’s new law.” The agents rolled out at around midnight. Alicia would remain in detention for another month when the family was able to bail her out.

What transpired those two days in April 2017 is a frightening look into President Trump’s new era of draconian enforcement of immigration laws, often in violation of the Fourth Amendment. This family, especially these young children, are now understandably terrified by any police officer. The children may never go up to law enforcement even if in danger and needing help.

Raids like the one this family experienced have led to both a jump in the number of immigration arrests of individuals with no criminal history as well as a sharp drop in reporting of crimes from Latinos in numerous cities nationwide where immigrant communities fear the consequences of speaking up. Trump has unleashed ICE and other federal law enforcement agencies across America. Public safety will be the casualty.

But this time, ICE and the U.S. Marshals picked on the wrong family. With the help of the ACLU of Utah Foundation, Inc., the ACLU’s Immigrants’ Rights Project, and Covington & Burling, LLP, the family is suing the agents involved in the raids for violating their Fourth Amendment rights and using excessive force. The United States is governed by the rule of law, most notably the Bill of Rights, a concept the Trump administration can’t seem to wrap its head around.