The American People Support LGBTQ Equality. Congress Should Too. 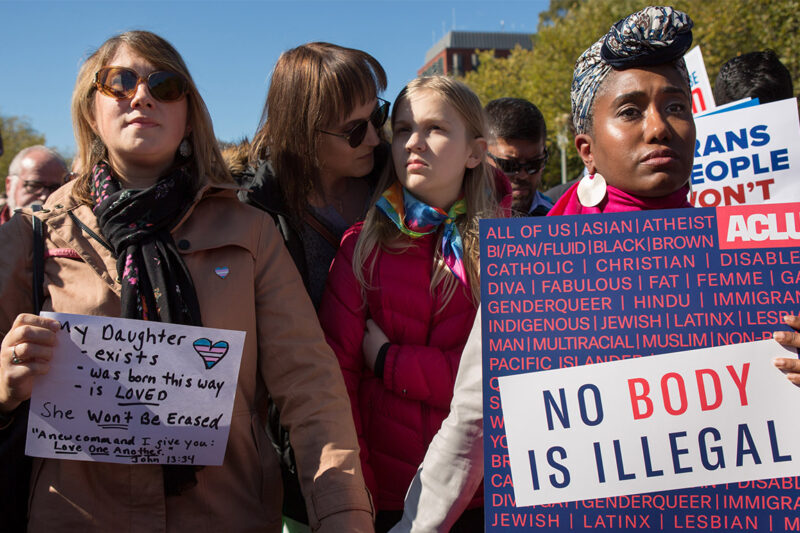 In the past seven days, the House of Representatives has held two historic hearings on the Equality Act, HR 5, a bipartisan bill that would add explicit protections from discrimination based on sexual orientation and gender identity to our civil rights laws, and update the laws to provide increased protection for all women and people of color. What was most notable from the hearing is that (apart from one witness), no one denied that it is wrong to discriminate against someone because of their sexual orientation or gender identity.

Opponents of equality are faced with the undeniable truth that a significant majority of the American public believes that such discrimination is wrong. So during the hearings we saw them turn to rehashing arguments that the laws are too vague, that protecting trans people will somehow take away rights from non-transgender women and girls, and that freedom of religion will be imperiled.

As we know from decades of experience with similar state laws that protect LGBTQ people, these laws help ensure that people can go about their day-to-day lives free from discrimination. They give clarity to employers, schools and businesses about their obligations under the law. There is nothing vague about protecting LGBTQ people from discrimination. Opponents argue that the Equality Act is “vague” because, they say, it is impossible to know if someone is really trans. That is both factually and legally wrong.

All of us have a gender identity, and there is no reason to question the sincerity of transgender people’s identities. And there is no requirement that a protected characteristic have outward and objective manifestations. We don’t, for example, require that one prove their race or religion with scientific markers. Nor is there any history of people using trans-inclusive laws to fake being trans in order to be protected from discrimination or to take away benefits from non-transgender women.

The next argument — that protecting trans kids and adults from discrimination will result in harm to cisgender women and girls, particularly in sports — echoes arguments made by opponents of LGBTQ equality that nondiscrimination protections will result in harm in restrooms. They’ve since admitted those arguments were fabricated. Here, too, nothing in the Equality Act or any other local, state or federal non-discrimination law threatens to undermine women’s sports or any other women’s activity or space. Women and girls who are transgender are women and girls. They are not male. And protecting people from discrimination based on gender identity doesn’t allow anyone to take advantage of the law by pretending to be trans. That’s why women’s rights and gender justice organizations are supporting the Equality Act. In fact, far from harming women, the Equality Act expands sex discrimination protections for all women – for the first time prohibiting sex discrimination by businesses open to the public and those that receive federal funding.

Finally, our civil rights laws and freedom of religion will continue to co-exist under the Equality Act, as they have under the civil rights laws for over half a century. The Act leaves in place all of the existing exemptions for religious organizations and individuals. It also clarifies that the Religious Freedom Restoration Act cannot be used as a claim or defense to any civil rights claim – because the government’s interest in enforcing those laws is so important, and allowing people to claim their religious beliefs entitle them to discriminate would let those beliefs be used as a sword.

Watching Carter Brown, Jami Contreras and eight-year-old Kai Shappley sitting in the committee hearings, and hearing their stories, I was struck by their strength and their courage. The reality is that discrimination is real and pervasive — nearly two-thirds of LGBTQ Americans report having experienced discrimination in their everyday lives, and those rates are even higher for LGBTQ people of color. Carter, Jami and Kai are not alone.

Updating our civil rights laws won’t change everything. But it will give people a tool to fight for equal dignity and respect. And it will send the message that the government cares about whether and how LGBTQ people live.