Betsy DeVos Refuses to Take a Stand Against Discrimination, Again 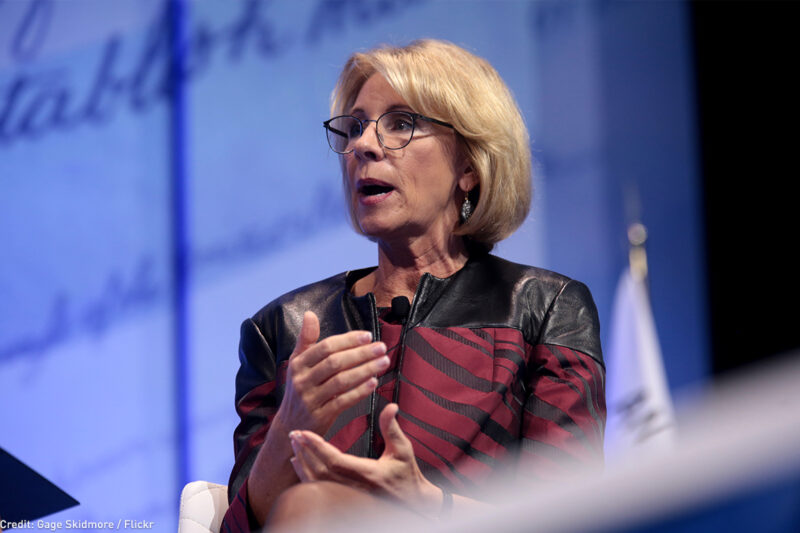 Secretary of Education Betsy DeVos was back in her hometown of Grand Rapids, Michigan, this week, for some meetings, where she made herself available for questions from local students and the press.

During a visit to Grand Rapids Community College on Tuesday, DeVos was asked if she would intervene if states offered vouchers to private schools that discriminated against LGBTQ students. She declined to answer or provide reassurance that taxpayer dollars would not be used to discriminate.

This wasn’t surprising, since DeVos has refused to stand against discrimination many times before. At a House hearing in May on the Department of Education’s proposed budget, which included a new $250 million voucher program, DeVos refused to rule out providing federal money to schools that discriminate against LGBTQ students. Likewise, at a Senate hearing in June, she would not say if schools that discriminate would be barred from receiving federal money.

DeVos has said the states would set the rules and determine whether to withhold federal money from private schools. But state-run voucher programs, which funnel taxpayer money from public schools to private and religious schools, have deeply troubling records on discrimination. Private schools participating in voucher programs often deny admission to LGBTQ students and students with LGBTQ parents. They also often discriminate against students with disabilities, by denying them admission, providing inadequate services, or subjecting them to excessive discipline. Many programs don’t serve low-income students because schools charge more than the voucher value, and voucher programs have been shown to increase racial segregation.

Eliminating discriminatory barriers in education should be central to the mission of the education secretary. Yet, DeVos’s record before joining the Trump administration shows diehard devotion to causes that erect these barriers.

She and her family have spent millions to support politicians, groups, and initiatives that would advance the spread of vouchers in Michigan and throughout the country. One of the most notable examples is from 2000, when DeVos and her family attempted to change the Michigan state constitution to allow public financing of private and religious schools – an initiative that 68 percent of voters rejected.

DeVos has started several advocacy organizations to promote vouchers and other ways of privatizing public education. One such organization is the American Federation for Children, which DeVos chaired prior to her nomination to lead the Department of Education. During the first half of this year, American Federation for Children was busy lobbying Congress and the White House in favor of a federal voucher program.

Just last year, DeVos fought to stop legislation to increase oversight of charter schools in Detroit, where those schools – most of them operated by for-profit companies – have proliferated wildly without benefiting students. State lawmakers who supported her position received generous campaign contributions from her family, which gave the state Republican Party and candidates $1.45 million in the course of a few months last year.

DeVos’s approach to education hasn’t changed with her move into the Trump administration. She recently commented that, under her watch, the Department of Education’s Office for Civil Rights will be a “neutral, impartial” agency. One of the department’s first major acts was to revoke guidance that clarified that transgender students are protected from sex discrimination by Title IX, the federal law that bars gender discrimination. Revoking the guidance did not change schools’ obligations to protect transgender students, but it was a troubling signal.

The evidence is overwhelming that DeVos’s plans would promote discrimination and harm the most vulnerable students, just as her record showed in Michigan. Now, she’s intent on taking those failed policies national.