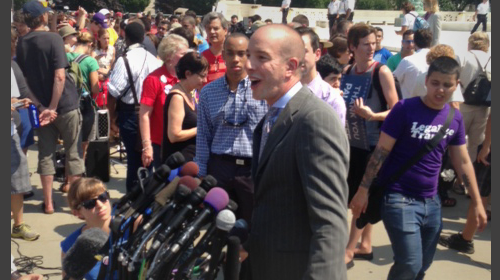 27 years ago, I decided to study law because I wanted to make a difference in the world. And today, the American Civil Liberties Union – the organization that I have been privileged to lead since 2001 – made history by striking down the discriminatory Defense of Marriage Act and winning justice for our client, Edith Windsor.

Edie is one of my favorite clients of all time. She is smart, loving, energetic, passionate, tenacious, and courageous.

When our government failed to recognize her marriage to her longtime partner Thea Spyer after Thea’s death, and instead treated them as strangers under federal law, we knew that we had to do something about it.

The ACLU brought our first gay rights case in 1936. And we brought our first same-sex marriage case in 1971. We have been fighting this fight for nearly eight decades. And today’s ruling was a victory not just for Edie but for millions of Americans in generations to come.

The Supreme Court did what I once thought was unthinkable in striking down DOMA. The Court could have played it safe – ruling on federalism grounds – finding that the federal government must recognize states’ determination of who may or may not get married. But instead, a majority of the Justices took one huge step further, striking down DOMA on Equal Protection grounds. That gives us a new quiver to go after laws that discriminate against same-sex couples in every state.

Today, the ACLU stands poised to strike down barriers to the freedom to marry in states across the country. We’ve hired Republican strategist Steve Schmidt, vice chairman of public affairs at Edelman and the former senior advisor to Sen. John McCain’s presidential campaign, to spearhead our campaign to strike down state-based laws prohibiting same-sex marriage. We have also hired Jimmy LaSalvia, founder and former executive director of GOProud, to help with outreach to gay conservatives, particularly within the Tea Party.

Over the next four years, we will work both with and within the Republican Party to challenge legislative and constitutional provisions in states such as Illinois, Oregon, Hawaii, New Mexico, and others. We will build broad-based support from coast to coast for the freedom to marry.

We’ve got the staff in every state and we’ve got momentum on our side. We’ve got the resources to win. Full equality is just a matter of time.