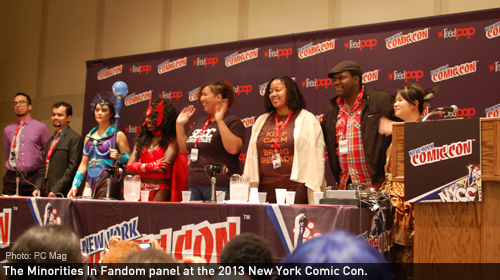 The New York Times OUT and Geeks Out Present: LGBT and Allies in Comics panel was the first panel I attended. Panelist Dan Parent, who writes Kevin Keller for Archie Comics, spoke about the importance of Keller, the first gay character in the Archie universe. Keller’s comic book debut was Archie Comic’s best-seller of all time, and despite protest from One Million Moms regarding the sale of his wedding issue in Toys ‘R’ Us, the issue was a success. Parent even wrote a nod to the protest for Keller’s first kiss issue. Parent added, that because Archie Comics are viewed as an all-ages “wholesome” comic, it reaches kids that mature comics with gay characters may not. 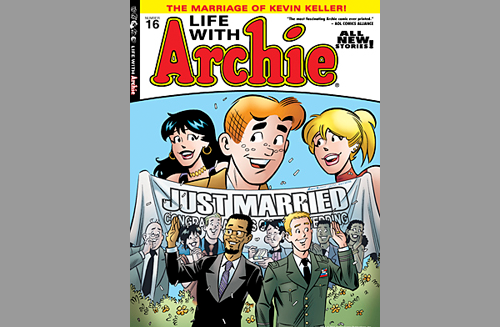 Before Keller, the first same-sex wedding in comic book history took place between a bi-national couple, Northstar and Kyle Jinadu, in Astonishing X-Men. Panelist Marjorie Liu wrote the X-Men wedding issue, which coincided with the actual takedown of DOMA (we played a part in that takedown, of course). Panelist Greg Pak, who writes X-Treme X-Men, a comic that features couple Howlett and Hercules, said that although acceptance of adult gay characters has become more common in comics, when it comes to teens, we still have a way to go. One audience member added that representation of asexual and trans characters is lacking, and Pak noted that it is important to get more diverse representation out there, because “no one character should have to sustain the hopes and dreams of a whole community.”

Another panel at NYCC was The Mary Sue Presents: Representation in Geek Media, moderated by The Mary Sue‘s Jill Pantozzi. The panel discussed the importance of seeing representations of oneself in entertainment, and comics. The controversy surrounding gender swaps of characters for reboots was also up for debate. There were rumors that Jimmy Olsen would become Jenny Olsen for Man of Steel, and the panel addressed the anger that some fanboys felt over the possible switch. In a world comprised of ever-changing mutants, immortals, and supernatural beings, why is a gender swap still so controversial?

The final panel I attended was Geeks of Color Assemble!: Minorities in Fandom. Early in the panel, the topic of cosplay racism came up, at which point panelist Jay Justice stated the obvious, that “cosplay racism is just racism,” and it is the reason blogs like Cosplaying While Black need to exist. Another problem in regards to visibility for geeks of color is the whitewashing of certain comics when adapted to film. Mention of The Last Airbender in this room was met with angry boos. As the panel wrapped up, moderator Diana Pho brought up intersectionality. As the large majority of the room was made up of women, people of color, and LGBTQAI individuals, or all of the above (a very rare sight at any comic con), the panelists encouraged us all to look out for any groups that are marginalized and work together to foster better visibility, create more opportunity, and encourage diversity.

The panels on issues of underrepresented groups in the comic book industry definitely encouraged some inspiring discussions, and it’s really promising to see, because these communities have already been comic and geek culture consumers from the beginning! At the Geeks Out panel, panelist Dan Ketchum told the audience if we wanted to see better representation, to “vote with [our] dollars.” It’s obvious that this industry will only live long and prosper if it works harder to represent all of its fans.