The Disingenuous First Amendment Defense Act Is Indiana on Steroids 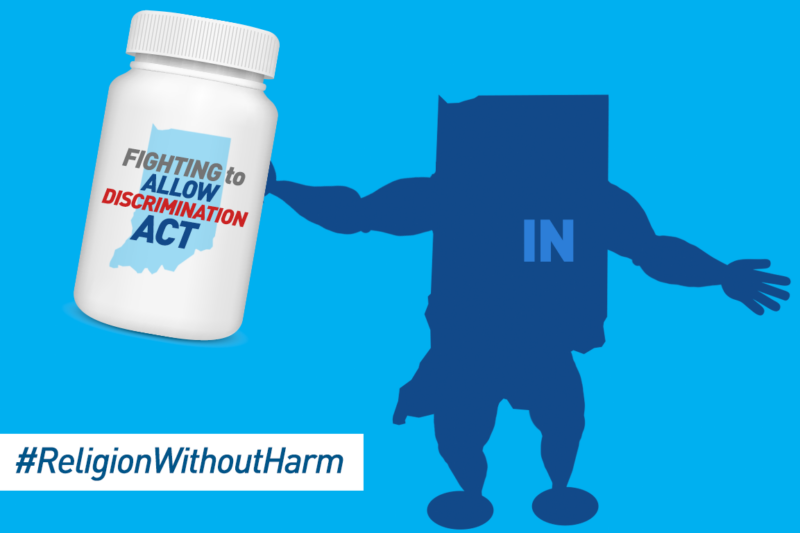 What the heck are some members of Congress thinking?

This spring, Indiana faced a national backlash after the passage of a state law that gave a green light to discrimination and harm under the guise of religious liberty. Now, just a few months later, prominent members of the House of Representatives, as well as leading anti-LGBT organizations, are pushing a bill – disingenuously titled the First Amendment Defense Act – that would open the door to unprecedented taxpayer-funded discrimination against LGBT people, single mothers, and unmarried couples.

Its parade of horribles would:

The bill defines a person to include for-profit corporations, and it would allow anyone to assert “an actual or threatened violation of this Act as a claim or defense in a judicial or administrative proceeding.” FADA would allow any individual, group, or business, including recipients of federal funds, to file a lawsuit and potentially receive damages from taxpayer money. All they have to do is believe they may somehow be required by the federal government to do something that implicitly condones marriage for same-sex couples or sexual relationships outside of marriage

In addition to all of this, the bill would eviscerate the historic nondiscrimination executive order that President Obama signed last summer to prohibit businesses that contract with the federal government from engaging in discrimination on the basis of sexual orientation and gender identity.

Despite the claims of some marriage equality opponents, the First Amendment already protects the rights of churches and clergy to decide which unions to solemnize within their faith traditions. Since the founding of our country, no church has been forced to marry any couple in violation of its religious doctrine and that will not change now that same-sex couples can marry. And, the ACLU would be the first to rise in defense of these religious institutions if government ever tried to do that.

While this bill does nothing to protect individuals’ rights under the First Amendment, it would provide a sweeping right to discriminate in federal law. Leadership in the House of Representatives would be well served to heed the lesson of Indiana and keep this bill far away from the House floor.