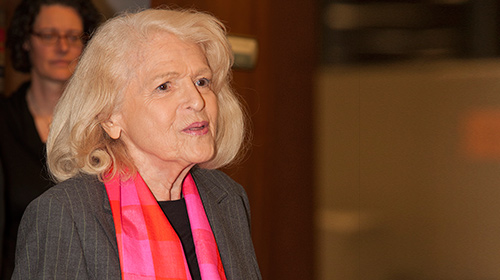 Yesterday, in Edie Windsor’s challenge to the so-called Defense of Marriage Act, the Second Circuit Court of Appeals ruled that DOMA violates the Constitution. It’s the second federal appeals court to strike DOMA down, and it’s the first to rule that “heightened scrutiny” applies when the government discriminates against lesbians and gay men.

Getting another federal court ruling against DOMA is a big deal by itself. DOMA means that the approximately 120,000 married same-sex couples in the United States are considered to be unmarried – legal strangers – for all of the 1,000+ federal programs where marriage makes a difference. For Edie, it meant that she had to pay $363,000 in federal estate taxes after her spouse Thea died, whereas a straight widow wouldn’t have had to pay a dime. For other married gay people, DOMA means they can’t provide health care for their spouses, can’t get income tax breaks, can’t get social security survivor’s benefits, or can’t sponsor their spouses for citizenship in the US – all protections that married straight couples do get. The court ruled that this kind of unequal treatment violates the Constitution.

But the heightened scrutiny ruling makes this opinion even more important. We’ve been working for decades to convince federal courts to adopt this analysis. Under heightened scrutiny, courts will presume that government discrimination against lesbians and gay men is unconstitutional and will demand that government explain why it has to rely on sexual orientation. Under “rational basis review,” the lower level of judicial review that we’ve labored under for years, the government discrimination is presumed to be constitutional, and it’s the plaintiff’s burden to prove that it’s not. In a court case, it’s the difference between night and day.

If the heightened scrutiny analysis is adopted by the Supreme Court, it will revolutionize the gay rights legal world, forcing state governments to explain why they need to treat lesbians and gay men differently in their parenting laws, in their hiring and firing decisions, and in public schools all across the country.

We couldn’t have gotten the ruling without the fabulous Edie Windsor, who shared her life with Thea Spyer, her partner and then spouse, for 44 years before Thea died in 2009. Thea was diagnosed in 1977 with multiple sclerosis, and Edie and Thea both worked to accommodate Thea’s progressive paralysis over the next 30 years. They literally lived the “in sickness and in health” vows. If you haven’t seen the video about Edie, take a minute to watch – it’s a wonderful story!

Now we wait to see what the Supreme Court does. There are petitions for Supreme Court review pending in four different cases, including Edie’s, and it’s a virtual certainty that the Court will take review in one of them. We expect to hear within a month or two which case(s) the Court takes. But for now, I’m thrilled with the Second Circuit decision and all that it means for Edie, for DOMA, and for LGBT rights more broadly.

WATCH: At a press conference in New York City, Edie discusses what the victory means for her and for committed, loving, same-sex couples everywhere.