DOMA Unconstitutional! And Prop 8 Goes Down, Too! 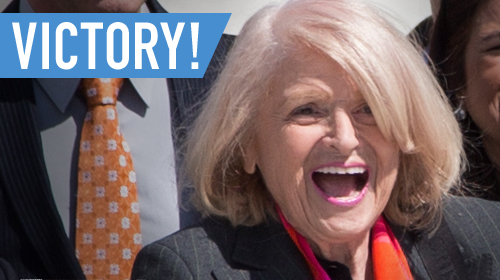 The United States Supreme Court just ruled that section 3 of the federal Defense of Marriage Act (DOMA) violates the Constitution. This decision, in the ACLU’s lawsuit on behalf of Edie Windsor, marks a watershed moment in the movement for LGBT equality. It’s a monumental victory for Edie Windsor, for married same-sex couples, and for the bedrock American value of equality.

The core provision of DOMA required the federal government to treat the marriages of same-sex couples one way (as though they had never happened) and the marriages of straight couples a different way (respecting their validity in 1,138 federal contexts). The Supreme Court struck down DOMA both because of that unequal treatment and because the federal government had improperly taken over the states’ normal role of deciding who is married and who isn’t.

The end of DOMA brings important protections for thousands of married same-sex couples all across the country. For Edie Windsor, what DOMA meant was a bill for $363,000 in federal estate taxes after her spouse and partner of 44 years died, whereas her tax bill would have been $0 if she had been a straight widow. For other married same-sex couples, the dismantling of DOMA means getting Social Security survivor benefits, the ability to take family medical leave, access to health care, the right to sponsor a spouse for a green card, and notification when a spouse in the military dies in the line of duty, just to mention a few. No longer will gay couples be relegated to what Justice Ginsburg memorably called “skim milk marriages.”

The demise of DOMA section 3 is also a crucial milestone on the road to LGBT equality because DOMA is the last federal law that requires discrimination against lesbian, gay, and bisexual people. That makes the Windsor decision, which wipes away the core of DOMA, the capstone on decades of work to rid the country of codified anti-gay discrimination at the federal level.

There used to be lots of explicitly anti-gay federal laws. There were federal laws banning the government from employing gay people, saying that companies that did business with the federal government couldn’t hire gay people, that lesbians and gay men were not permitted into the country, and of course that lesbian, gay, and bisexual people could not serve openly and honestly in the military. America got rid of all of those laws because we came to recognize how unfair they are, how unconstitutional they are, and how they violate our basic norm of equality.

So Windsor isn’t just the death of the core of DOMA, it’s the end of official federal discrimination against lesbians and gay men. That’s quite something to celebrate!

The Court gave us another milestone today – it restored the freedom to marry in California. Dismissing the appeal by the proponents of Prop 8 (the folks who put it on the ballot) for lack of standing, the Court effectively re-instated the trial court decision from August 2010, which struck Prop 8 down as violating the U.S. Constitution. We congratulate the Perry team on their incredible achievement – persuading the Court to allow California to become the 13th state (and the District of Columbia) to embrace marriage for everyone.

Much remains to be done to bring the freedom to marry to everyone in America. But the momentum behind the freedom to marry today is unprecedented – just seven months ago, there were only 6 states plus DC where same-sex couples could marry, and none of those marriages were respected by the federal government. Now we have more than double that number, and have federal recognition as well. We made that progress at the ballot box, in state legislatures, in the courts today, and in conversations around kitchen tables all across the country. Here at the ACLU, we are already hard at work on the next chapter of the work to bring the freedom to marry to the entire country. And today’s decisions give that broader movement increased momentum.

The ACLU and I are proud, honored, and humbled to have represented Edie Windsor along with the Paul Weiss law firm, our colleagues at the NYCLU, and the Stanford Law School Supreme Court Litigation Clinic. We would not have gotten rid of section 3 of DOMA without the love and devotion that Edie Windsor and Thea Spyer committed to each other for over 44 years, or without the courage and determination that Edie brought to righting this clear wrong. Each of us – gay and straight – owes Edie a great deal for making our country more free, more equal, more fair – in short, more American today.