Hello, My Name Is NOT "Gaytard." How May I Help You? 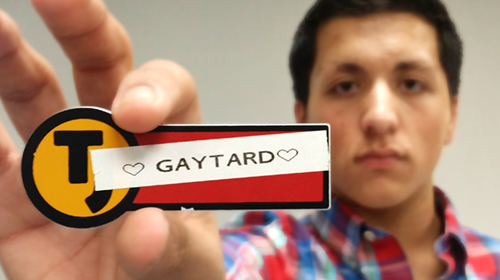 I’ve been out to my family and friends since I was in the 5th grade. I’m not ashamed of being gay, and I don’t hide who I am from anyone.

After school ended last semester, I wanted to find a summer job for the usual teenage reasons: spending money for clothes, a cell phone, going out with friends, and maybe even save up a little too. I applied for a crew member position at the Taco John’s in my town – Yankton, South Dakota – in early June, interviewed the next day, and started working the night shift the day after that.

I hadn’t been working at Taco John’s long before the night manager was saying things about me to other employees behind my back, calling me “faggot” and saying things like, “Tyler is so gay it’s not even funny.”

About three weeks after I’d started working there, the night manager called me into the office and handed me a name tag he’d just made. He said, “Wear this!” with a huge grin on his face like he was really proud of himself. I looked at the name tag and saw that it read “Gaytard” with little hearts on either side of the word. My mom raised me to be respectful and polite, and I didn’t want to lose my job. So I put the name tag on and then said, “Okay, can I take it off now?” He just laughed at me and told me to leave it on.

He made me wear that embarrassing name tag all night.

Every time I had to help a customer, I tried to stand so that it was hidden by the register. But that didn’t really make much difference because the manager kept calling me “gaytard” really loudly in front of customers for the rest of my shift: “Hey, gaytard, help this customer!” and “Take out the trash, gaytard!” It was extremely humiliating.

After I got home, I decided I just couldn’t go back for more abuse at Taco John’s. I want my little brothers and sisters to look up to me and know that I stood up for myself. So I went to the restaurant the next morning, turned in my uniform, and told the daytime manager why I was quitting. He tried to make me give the name tag back, but I told him I was keeping it.

After I started telling my story publicly, Taco John’s International put out a statement saying they take harassment in their restaurants seriously, but they said it was up to the local franchise in Yankton to do something about the humiliation I faced. Well, all the local franchise did about it was say that the name tag was my idea and that I thought it was funny.

It wasn’t my idea, and I never thought it was funny. It’s a mean, ugly word that makes fun of both gay people and people with developmental disabilities, and I would never call myself a name like that.

That’s why today, the American Civil Liberties Union is helping me file formal charges of discrimination with the U.S. Equal Employment Opportunity Commission.

It was wrong for the manager to humiliate me like that, and it was wrong for Taco John’s International to refuse to do anything about what happened at a restaurant with their name. I want other LGBT people to know that this type of harassment is illegal, even in places like South Dakota. And I hope we can make sure nobody who works at any Taco John’s ever has to go through that kind of humiliation at work again.