How the ACLU Helped Get Us To Today's Marriage Moment 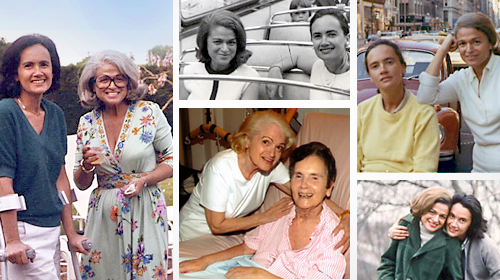 As the Supreme Court takes up the challenge to California’s Prop 8 today, and the ACLU’s challenge to DOMA tomorrow, it’s clear that we’ve reached a tipping point on marriage for same-sex couples. Public opinion on this issue has reached approval levels that couldn’t have been imagined just a few years ago – it seems like every time you open the paper there’s another person or organization expressing support for the freedom to marry. On Sunday, New York Times columnist Frank Bruni pointed out that March 2013 will likely be recalled as “the month when the political balance on this issue shifted unmistakably from risky to safe.”

So how did we get here? An essential driver of this change is that gay people have come out all over the country, having conversations that make the issue personal for their families, friends, and co-workers. And those conversations have been facilitated by the work of many LGBT advocacy organizations, including the ACLU, who for decades have pushed for equality in our laws, for the right to be ourselves and to talk about it, and for a wider public conversation about what it means to be LGBT. Indeed, prompting opinion change on LGBT rights issues is our goal even more than changing legal rules is, since it’s the opinion change that actually makes the world better for LGBT people.

As we note the rise in national support for marriage to 58 percent in recent polls, it’s worth remembering the work that has led to this moment. Here are just a few of the things that the ACLU is proud to have done to bring us to this tipping point:

We have fought hard for LGBT people to be able to talk publicly about being gay and about their support for LGBT rights. Way back in 1936 (in our first gay rights case), Boston authorities censored Lillian Hellman’s play, The Children’s Hour, because of its lesbian content, and we sued to keep it onstage. In the 50s, we defended Allen Ginsberg and Lawrence Ferlinghetti in San Francisco’s attempt to suppress the gay content of Ginsberg’s Howl. Today we continue this free expression work, often in the context of representing LGBT teens who bravely come out in public schools, only to face censorship from school officials.

TheACLU has systematically battled government discrimination of all sorts against LGBT people since the 1950s. In 1956, we challenged a police raid on a popular gay bar in the San Francisco Bay Area and in 1965, challenged another police raid on a high-profile New Year’s Eve charity fundraiser sponsored by the Council on Religion and the Homosexual. In 1996, we were co-counsel in Romer v. Evans, in which the Supreme Court struck down an amendment to Colorado’s constitution that would have barred any non-discrimination protections for gay people. And in 2008, we represented Diane Schroer, a decorated Colonel in the Army Special Forces when she was denied a job as a terrorism researcher because she came out as a transgender woman – litigation that resulted in a landmark decision holding that federal law banning sex discrimination protects people who are changing gender.

We started fighting the military’s ban on gay people back in 1970, and brought Witt v. United States Air Force, in which a federal court held that Don’t Ask, Don’t Tell was unconstitutional, just before it was repealed by Congress.

The ACLU has fought state bans on gay people being adoptive or foster parents for years as well. We got the Arkansas Supreme Court to strike down that state’s ban on foster parenting by gay people, and also its ban on adoption or foster parenting by any unmarried couples, gay or straight. And, after five lawsuits over 20 years, we succeeded in getting Florida’s courts to strike down that state’s ban on adoption by gay people, passed back in 1977 in Anita Bryant’s famously anti-gay campaign.

The ACLU brought the first federal freedom-to-marry lawsuit for same-sex couples, in Minnesota in 1970, and we were co-counsel in the case in which the California Supreme Court declared that gay couples have the freedom to marry. And of course we’re part of Edie Windsor’s legal team in her challenge to DOMA.

Though many of these cases were legal milestones, the ACLU did not bring them just to win in a court of law. Each case we bring is designed to have its biggest impact in the court of public opinion. We know that court victories do not stay won unless the public fully accepts them, and so we use media and every means we can to spark the conversations about our issues that are how hearts and minds get changed all across the country.

When added to the amazing work of our colleague organizations, this advocacy has changed the American legal and cultural landscape for LGBT people. Not only have LGBT people and our issues become part of the country’s conversation, that conversation is becoming more accepting of and knowledgeable about gay people and our lives. This week’s Supreme Court cases will deepen that conversation, but however the Court rules, there’s no question that the conversation will continue. This change is so far along that there’s no turning back, either for us or for America. Full equality for LGBT people is on its way.