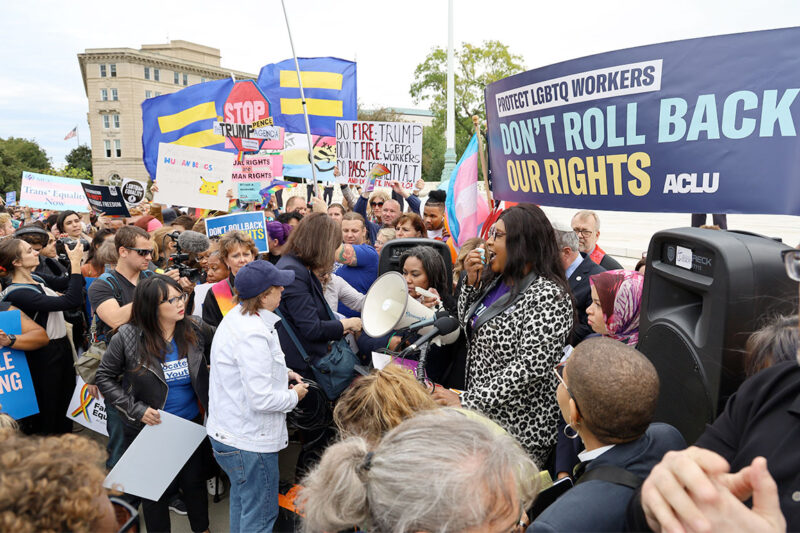 I’m optimistic about our chances. We need five votes, and it seemed to me that Justices Kagan, Ginsburg, Breyer, and Sotomayor were leaning our way, as hoped. Justice Gorsuch certainly implied that he thought our textual argument carried some weight, and that it was at least possible he will vote in favor of the employees. Justice Kavanaugh was almost entirely silent, giving very little clue as to his thinking. While Justices Roberts and Alito to me did not seem favorably disposed toward the employees and Justice Thomas presumably feels the same, we only need five votes. I think it is very possible that we will get them, in both the LGBQ cases and the trans case that were argued yesterday.

Our argument is morally right, of course, but it is also simple and legally sound. The question is whether discrimination against LGBTQ people is discrimination because of sex. It makes no sense to say that discrimination against someone for identifying with a sex other than their assigned sex at birth, or for being attracted to people of the same sex, is not about sex. The other side’s arguments sounded strained, and that’s because their arguments have no real basis in law or logic. The justices would have to warp the statute to exclude trans people and LGBQ people, and I think there is reason to hope that a majority will refuse to do that.

Yesterday’s argument included much discussion about a variety of sex-specific policies, and whether trans people may be forced to comply with them based on assigned sex at birth. While none of those policies are actually at issue in these cases, they were the subject of a lot of questions from the justices. That is because the other side’s strategy—even in the sexual orientation context—is to counter our arguments with anti-trans fear-mongering. I fear that to achieve a majority, the justices will write an opinion that would enable forcing trans women to follow the dress code for men, or to use men’s restrooms. While language like that would not technically be binding, it could make things much more difficult for trans people at work, at school, and in public places. And it could shore up the legitimacy of gendered dress codes that currently are legally dubious because they reinforce stereotypes about women in the workplace.

I think Aimee Stephens was right when she told Vox:

[T]he fact that we’re able to bring it forth and hear the case presented is a victory already. Regardless of whether it’s a favorable decision or not, we still have a lot of work to do. When this part’s over, we just work on the next issue, and work hard and keeping going.