It's Not the 80s Anymore: Transition-Related Care is Basic Healthcare 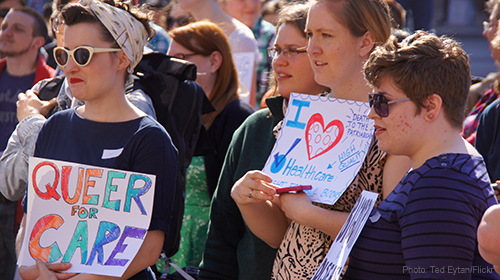 The big LGBT-news that the mainstream media is buzzing about this week is that transgender actress Laverne Cox became the first transgender person to grace the cover of TIME magazine.

She’s right. And this week there is not just one major moment for trans rights.

The ACLU and our partners have just secured a landmark ruling from the Department of Health and Human Services (HHS) striking down Medicare’s blanket ban on coverage for gender confirmation surgeries. This takes us one big step closer to our ultimate goal: a general recognition in America that transition-related care is basic health care for transgender people that no one should be denied.

Medicare provides health care for America’s elderly and disabled. Determinations of what medical treatments are covered by Medicare are made mostly by regional decision-making bodies, but there is a small number of national rules – called “national coverage determinations,” or NCDs – regarding whether certain treatments are covered by Medicare. Back in 1981, HHS issued an NCD that Medicare does not cover transition-related health care.

Today there is a consensus among doctors that transition-related health care is medically necessary, but the NCD has kept Medicare stuck in the early 1980s. So the ACLU, along with our partners at Gay & Lesbian Advocates & Defenders and the National Center for Lesbian Rights, filed an administrative challenge to the NCD, arguing that the rule is inconsistent with current medical science. Today, an HHS administrative review board ruled that we were right and struck down the archaic, discriminatory rule.

This decision takes away the blanket ban on Medicare coverage for transition-related medical care.

Instead of having their claims automatically denied, Medicare recipients who need transition-related surgery should either get coverage or, at a minimum, receive an individualized review of the medical need for the specific procedure they seek, just like anyone seeking coverage for any other medical treatment.

If they don’t, we’ll take up those appeals.

Getting rid of Medicare’s blanket ban on coverage is a significant step forward and brings the country much closer to the day when basic health care is widely available to transgender people, regardless of whether they are disabled, elderly, or poor.