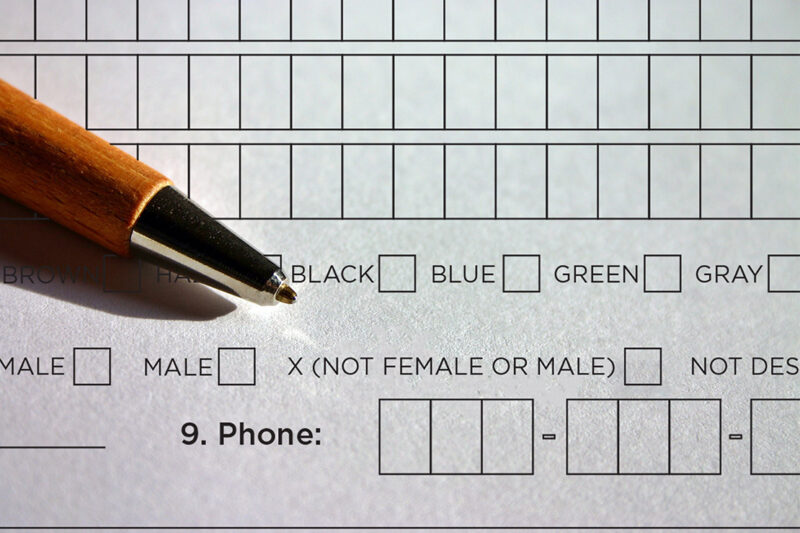 Trans and non-binary people often experience discrimination related to gender markers leading to a fear of violence when we must show our IDs.

I have never had an ID that accurately reflects my gender. The closest I have come to achieving this was when I received my New York City municipal ID (IDNYC). Unlike my state ID, my city ID does not have any gender listed. When applying for my city ID there were four options: M, F, X, and not designated. I was given the autonomy to choose the gender marker that was best for me, and I did not have to provide a reason or any medical documentation for my choice. As a non-binary person, being able to remove gender entirely from an ID gave me a sense of safety and comfort that I hadn’t previously experienced with other identification documents. I felt relief that when showing my city ID, it wouldn’t “confirm” anyone’s assumptions or prompt any questions about my gender.

As a non-binary person, being able to remove gender entirely from an ID gave me a sense of safety and comfort

However, I cannot use my city ID as proof of identity outside of New York City, and even within the city, there are many circumstances in which I must show my state ID instead, such as checking into an airport or making an age-restricted purchase. Whenever I present my state ID, I have to prepare myself for someone to look at my gender marker and make assumptions about who I am and how to refer to me, and when this happens, my gender is never respected, affirmed, or even seen.

The anxiety I feel in these situations is not uncommon among trans and non-binary people. The National Center for Transgender Equality reported that 40 percent of trans people who presented identification that did not match their perceived gender experienced harassment, 15 percent were asked to leave the premesis, and 3 percent were assaulted. The reality is that trans or non-binary people often experience discrimination related to our identification documents, which leads to us avoiding situations in which we need to show someone an ID for fear of violence.

The reality is that trans or non-binary people often experience discrimination related to our identification documents, which leads to us avoiding situations in which we need to show someone an ID for fear of violence.

In recognition of the barriers that trans and non-binary people face related to identitifcation documents, cities and states across the country are recognizing the need for more expansive ID options. Nineteen states and the District of Columbia have an option for an “X” gender marker on their IDs, and many allow for self-attestation of one’s gender without documentation from a medical provider. On the local level, some municipalities include a non-binary designation as an option, and others have an option to not list any gender on their IDs. Notably, municipal IDs offered in Oakland, Richmond, and San Francisco, California; Little Rock, Arkansas; Poughkeepsie, New York; and Detroit, Michigan do not ask applicants for their gender at all. These cities and states have demonstrated that IDs can function without issue with an X gender marker or without any gender designation.

But I shouldn’t feel limited in where I can live as a non-binary person. I should be able to easily access identification documents that affirm my gender and safety anywhere in the United States.

The ACLU is asking the Biden-Harris administration to issue an executive order that allows for self-attestation of gender when applying for federal identification documents and creates an “X” designation for those who do not want an “M” or “F” gender marker or do not wish to disclose their gender. In addition to the executive order, the ACLU also encourages federal agencies to re-evaluate which identification documents must require gender markers due to national or international standards, and to remove gender markers from being displayed on IDs whenever possible. The proposed executive order would help more trans and non-binary people gain access to IDs that affirm their gender, and would strengthen advocacy for the removal of gender designations on identification documents altogether. Trans and non-binary people know what is safest for us and our individual situations, and should be able to determine if we want to include a gender marker on our IDs at all.

Trans and non-binary people aren’t the only ones who will benefit from these changes. Many gender non-conforming people experience violence if the gender listed on their ID does not match their percieved gender, and some intersex people do not have access to affirming or accurate identification documents. Additionally, Black women are often masculinized and questioned about their gender due to anti-Black and misogynistic stereotypes, and are at a higher risk of harassment if their IDs are perceived as inaccurate. We must keep in mind that more expansive gender designation options on IDs, including those that forgo gender markers entirely, will have positive implications beyond trans and non-binary communities. We all have a stake in protecting each other from the violence that can result from identification documents, and in changing the policies and practices that harm those who are most marginalized in our communities.

We should advocate for gender designation options that grant people as much autonomy, privacy, and safety as possible, and recognize that sometimes the best option is no gender marker at all.