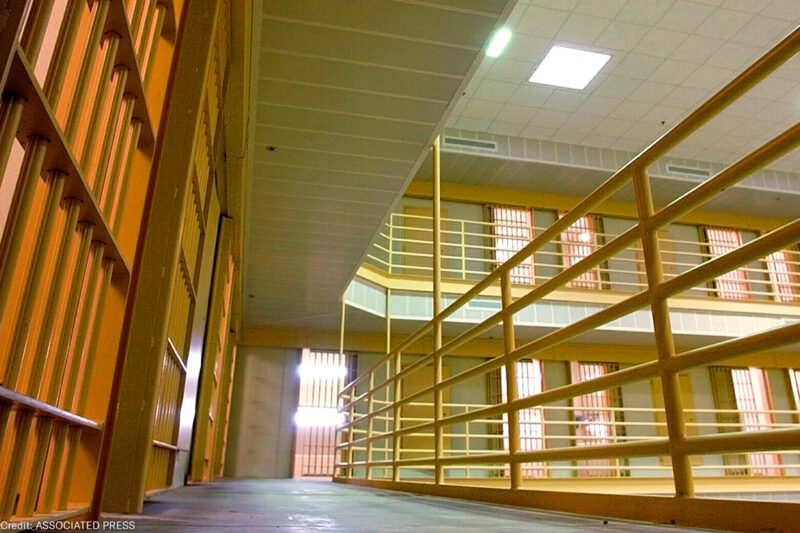 Jena Faith’s experience in the Steuben County Jail was a living nightmare.

The military veteran spent four weeks in the jail awaiting trial last spring. She was initially housed in the jail’s women’s facility without incident, but things changed when officials suddenly transferred her to the men’s facility, despite the fact that she is a woman.

During the weeks that Jena spent as a woman in a men’s jail, she was routinely targeted with physical and verbal harassment from other incarcerated people and guards. On her first day in the men’s facility, a fellow incarcerated person started touching her body and blowing kisses at her, making her feel scared and uncomfortable. When Jena told him to stop, he said that he wanted to marry her, and he wrote her several letters claiming he was in love with her. Afraid, Jena showed the jail’s guards, but all they did was move her to another section of the men’s general population, where she was promptly targeted by another man.

She knew her new harasser to be violent, but even as he repeatedly hurled threatening transphobic slurs at her in the presence of guards, they did nothing beyond telling him to stop a single time. The guards also started calling her “mister” and “a man,” even though she explained to them that she was a transgender woman. Terrified, Jena spent the rest of her days in the men’s facility feeling sick and scared to leave her cell.

Jail officials also denied Jena her doctor-prescribed hormone therapy, even as they made sure to give her all of her other prescribed medications, which led to hot flashes, cold flashes, nausea, and stomach pain. Since she was released from jail, Jena continues to suffer through sleepless nights and night terrors because of what she went through.

On August 22, the New York Civil Liberties Union, along with the Transgender Legal Defense & Education Fund and the law firm BakerHostetler, filed a lawsuit on behalf of Jena. It argues that what happened to her is a violation of numerous state laws designed to protect the rights, dignity, and humanity of trans people.

While Jena’s experience was harrowing, it’s not unique. Across the state, trans people are often held in jail and prison facilities that are not consistent with their gender, even though state law prohibits discrimination on the basis of gender identity and courts have held that it’s discriminatory to refuse to treat a person consistently with their gender identity. In part because they are housed incorrectly, trans people are exposed to overwhelming levels of abuse and harassment while behind bars, and they are far more likely than cisgender people to be targeted for the worst types of violence and mistreatment.

Part of the reason this problem is so widespread is that the state has not made it crystal clear to jail and prison officials that the laws protecting trans people apply when they are incarcerated.

But there are steps New York can take immediately to make sure other people don’t endure what Jena experienced.

To start with, the State Commission on Correction (the SCOC), under the direction of Governor Cuomo, should adopt minimum standards to ensure the safety and well-being of LGBT people in county facilities. This guidance is needed because some jails are clearly waiting for the state to act before they do anything to change how trans people are treated. A Rensselaer County official, for example, told the NYCLU they would not address the safety of trans prisoners unless the SCOC required it.

Gov. Cuomo has loudly proclaimed that he’s a defender of LGBTQ people, and he even instituted a travel boycott of North Carolina when lawmakers there passed legislation denying trans people access to facilities that correspond with their gender identity.

But on the issue of incarcerated trans people’s right here in New York to be free of the same type of discrimination that he objected to in North Carolina, Cuomo’s administration has been silent. The NYCLU sent a letter to the SCOC in February urging it to put out regulations to protect LGBT people. We received no response.

State lawmakers also have a role to play here. They can and should pass legislation that helps to clarify and protect the rights of LGBT people when they’re incarcerated.

We have a long way to go, but these actions would be a critical first step towards making New York a place where people like Jena Faith are not punished for who they are.