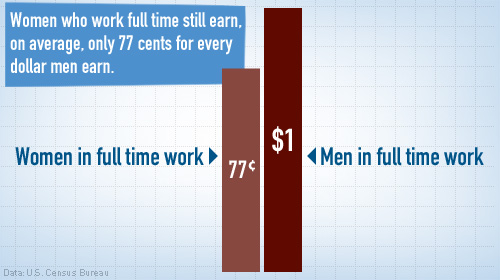 In the 50 years since President John Kennedy signed into law the Equal Pay Act of 1963, wages for women still do not equal those of men when they work the same job. According the U.S. Census Bureau, women who work full time, on average, earn only 77 cents for every dollar men earn. Women of color fare far worse, with African American women earning 64 cents and Latinas earning 55 cents for each dollar earned by a white man.

President Obama’s inaugural speech highlighted the ongoing problem of pay inequity for women. And today marks the anniversary of the Lilly Ledbetter Fair Pay Act – a bill that restores women’s ability to have their day in court to challenge wage discrimination and the first bill he signed as President. In honor of that anniversary, Sen. Barbara Mikulski and Rep. Rosa DeLauro reintroduced the Paycheck Fairness Act – a bill that would give women new tools to address the persistent pay gap and the next step in the fight for equal pay.

“[O]ur journey is not complete until our wives, our mothers and daughters can earn a living equal to their efforts.” That was President Obama’s powerful message about pay equity, delivered in his second inaugural address before the millions who watched on TV and gathered on the National Mall.

Ensuring that women earn a living equal to their efforts has been a priority for President Obama since the very beginning of his Administration. Four years ago today, President Obama made the Lilly Ledbetter Fair Pay Act the first bill he signed into law upon taking office. That important legislation, which remedied the damage done by the Supreme Court’s decision in Ledbetter v. Goodyear Tire & Rubber, ensured that women would still have the opportunity to get into court to fight pay discrimination. The legislation restored the law that had been in place for decades to ensure that the time limit for bringing pay discrimination claims would renew with each discriminatory paycheck, thereby giving women like Lilly Ledbetter a reasonable opportunity to protect their rights after learning of discrimination.

Four years later, it is time to take the next step on the journey. How fitting it is that for this anniversary of the Ledbetter Act, Senator Barbara Mikulski (D-MD) and Representative Rosa DeLauro (D-CT) reintroduced the Paycheck Fairness Act. The bill would provide a much-needed update to the Equal Pay Act of 1963 by closing some of the loopholes that have made the law less effective over time. So while the Ledbetter Act gave employees back their day in court to challenge a wage gap, the Paycheck Fairness Act would give employees the legal tools they need to challenge the wage gap itself. Together, these acts can help create a climate where wage discrimination is no longer tolerated and women can finally earn wages equal to the same work of their male counterparts.

The Paycheck Fairness Act would require that employers who pay their male and female employees differently for doing the same work must have a business justification that is not based on the employee’s sex. It would also provide more remedies for wage discrimination and prohibit retaliation against workers who inquire about wages or disclose their own wages to their co-workers. This provision is particularly significant when you consider that Ms. Ledbetter could not sue for so long because she did not know about her discriminatorily low wages due to a company nondisclosure policy. Nearly 50 percent of employers either discourage or outright ban employees from discussing their wages. As Lilly herself points out, had the Paycheck Fairness Act been the law when she was working at Goodyear, she would have been able to find out that her pay was less than her male co-workers without fear of retaliation and would have more easily been able to do something about it. The Administration has repeatedly endorsed the Paycheck Fairness Act as the next step in helping workers fight for and achieve fair pay. If Congress fails to act on this critical legislation, we hope the President will issue an executive order that would ban this kind of retaliation by companies that work for the federal government.

So, on this anniversary of the Lilly Ledbetter Fair Pay Act, let’s follow President Obama’s call to action. Without enactment of the Paycheck Fairness Act, our journey for equal pay will not be complete.