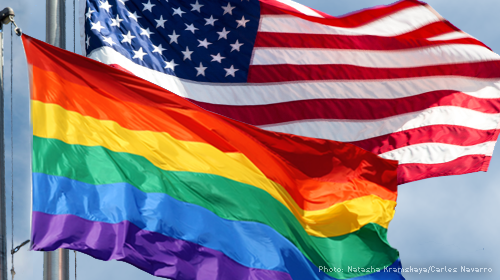 By all accounts, Landon Wilson served with honor in the U.S. Navy during a short, but distinguished military career. He was trained as a cryptologic technician, at great expense to the military, and eventually served in Afghanistan where he assisted with Special Operations missions. The reason Landon’s military career was cut short was not of his own choosing, and it was certainly not a reflection on his capabilities or desire to serve.

Landon is a transgender man, and he eventually was confronted with a painful choice: Either be true to himself or serve in silence. For Landon, there wasn’t a choice.

Earlier this year, in an interview with the Washington Post, he said:

The military gave me the backbone to transition, to be who I am, because they look so fondly on honor and courage and all those things you have to have to be fully authentic. I don’t think I would have gotten to where I am today without that.

There is no doubt that the military would be a stronger institution if Landon was still ably serving in it. Unfortunately, outdated and discriminatory regulations currently prohibit transgender people from serving openly. However, just as other discriminatory barriers — from DOMA and “Don’t Ask, Don’t Tell” to Medicare’s ban on coverage for gender confirmation surgeries — have fallen, so too will this one.

The most powerful argument against the current ban is to point to the distinguished service of people like Landon and former ACLU client Diane Schroer. Landon and Diane are not alone. The largest national survey of transgender people to date found that about one-fifth of all transgender adults are veterans, making transgender people approximately twice as likely as others to serve in the military. Requiring these brave Americans to continue to serve in silence is a profound injustice.

Last month, Defense Secretary Chuck Hagel said that he believes the ban should be reviewed. Such a review would be a welcome step forward and should be swiftly undertaken. In March, a commission co-chaired by former U.S. Surgeon General Jocelyn Elders released a report concluding that the current ban on transgender military service is not based on sound medical reasoning. The report further found that eliminating the ban would advance numerous important military interests, including enabling commanders to better care for their service members.

We at the ACLU are committed to working to overturn this ban. Whether that is by sharing the stories of transgender service members like Landon or engaging in advocacy with the Department of Defense as they undertake their review or, yes, eventually bringing a legal challenge, we are making a Pride Month promise that this discriminatory policy’s days are numbered.