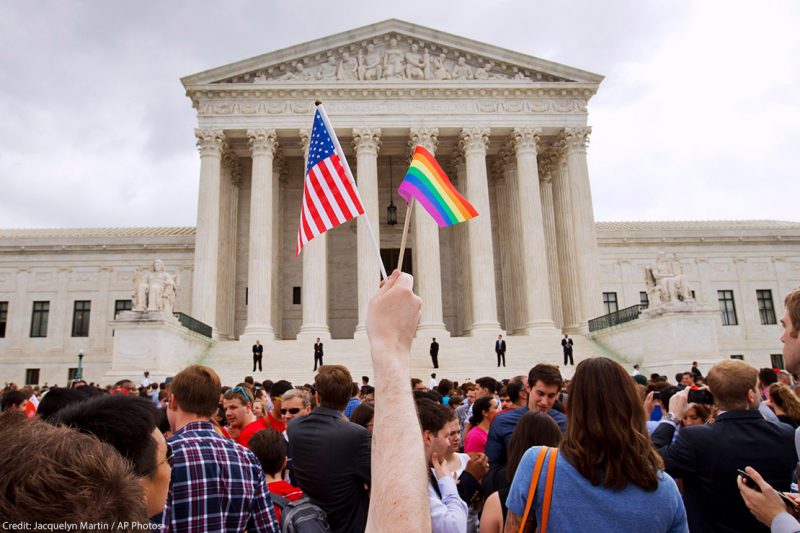 In a case involving same-sex couples and a foster care agency with a government contract, SCOTUS declines to create constitutional license to discriminate, ruling that the city of Philadelphia violated the rights of a religious foster care agency for reasons specific to its contract with the agency.

Today the Supreme Court issued a narrow ruling that one taxpayer-funded religious agency in Philadelphia has a right to renew its contract to provide foster care services to the city, despite its unwillingness to comply with the city’s non-discrimination requirement, because the city’s contract had a mechanism for allowing individualized exceptions to its non-discrimination policy that it did not grant to that agency. Importantly, the court did not rule (as the agency asked) that there is a constitutional right for government contractors such as the foster care agency to discriminate in their work for the city based on religious beliefs. This means that governments can and should continue to enforce their non-discrimination laws in all contexts.

The ruling comes in Fulton v. Philadelphia, in which the city of Philadelphia refused to renew a contract with Catholic Social Services, an agency that the city had hired to evaluate prospective foster parents, when the city discovered that CSS was unwilling to approve same-sex couples, in violation of the city’s non-discrimination requirement. CSS then sued, arguing that it had a constitutional right to change the terms of its contract with the city because of CSS’ religious objection to complying with the city’s non-discrimination rule. CSS also argued that Philadelphia’s decision not to renew CSS’ contract was unconstitutional because the city didn’t enforce its non-discrimination rule uniformly, but instead had the discretion to allow individualized exemptions that it refused to extend to CSS.

The ACLU represents two organizations, the Support Center for Child Advocates and Philadelphia Family Pride, that intervened in the case to help the city defend its non-discrimination policy that applies to government services contractors.

The Supreme Court ruled for CSS, but on the ground that its policy was not even-handed, not on the right to discriminate ground. The Fulton ruling is therefore somewhat akin to the Supreme Court’s 2018 ruling in Masterpiece Cakeshop v. Colorado Civil Rights Commission, in which a bakery claimed a right to refuse to sell a cake to a same-sex couple for their wedding. In Masterpiece, as in Fulton, the court issued a narrow opinion that avoided the right to discriminate issue and instead ruled that the government agency involved — in Masterpiece it was the Colorado Civil Rights Commission — had made anti-religious comments at an early hearing in the case. That violated the Constitution and meant that the commission’s judgment against the bakery had to be overturned. In Fulton, the court once more ruled for the religious plaintiff on narrow grounds and refused to create a constitutional right to discriminate.

Since Masterpiece, in a series of cases, anti-LGBTQ advocates have tried to get courts to rule that businesses, health care providers, employers, and government contractors all have a constitutional right to discriminate because of their religious objection to LGBTQ people.

Today’s ruling in Fulton is now the second time that the court has refused to do so, although anti-LGBTQ advocates continue to pursue other cases in an effort to tee this issue up for the high court. And we know any loss — even this narrow one — will be painful to the LGBTQ community, particularly in the wake of a record number of anti-LGBTQ bills moving in state legislatures this year.

The legal fight about whether, and in what context, the Constitution gives some people a right to discriminate is one of the most important legal issues for the LGBTQ community. It has consequences for how every single non-discrimination law and regulation operates, and could allow all of the civil rights laws that our community struggled for decades to establish to be undermined and side-stepped and ultimately rendered close to irrelevant. It could also result in discrimination not just against LGBTQ people, but against religious minorities, people of color, people with disabilities, and all women. Similar claims of a constitutional right to discriminate have been made in the context of foster care agencies that exclude prospective families that do not share their faith, including the largest state-contracted foster care agency in South Carolina, which accepts only evangelical Protestants and has turned away Catholic and Jewish families.

This is not the first time that people have asserted a constitutional right to discriminate in violation of civil rights laws, but courts have repeatedly rejected the claim. In the 1980s, religious schools were sued for paying women less than men who did the exact same job. They sought to defend the discrimination by saying that their religion required them to treat men and women differently, and that it would violate their freedom of religion to apply the civil rights law to them. The courts had no trouble rejecting their argument. Back in the 1960s, a South Carolina restaurant was sued for serving Black customers only through a side door, while white customers could come inside and be served. When the restaurant tried to defend against a civil rights suit by saying that its religion required the discrimination and that applying the non-discrimination rule would violate their religious freedom, the Supreme Court called the argument “patently frivolous.”

Nothing in today’s Fulton decision suggests that a constitutional right to discriminate that the court has rejected in other contexts exists in the context of anti-LGBTQ discrimination. So governments can and should still enforce their non-discrimination laws.