Today at the Supreme Court: Ms. Windsor Goes to Washington 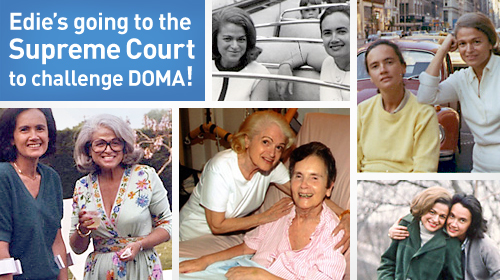 I’m writing from DC, where “Team Edie” has spent the last few days in intense preparations for today’s Supreme Court oral arguments in Edie Windsor’s challenge to the Defense of Marriage Act.

Edie’s case presents a straightforward question of equality: Is it fair for the federal government to pretend that her marriage to Thea Spyer, with whom she shared her life for 44 years, never happened? That’s what DOMA requires the federal government to do – treat the approximately 130,000 married same-sex couples in the United States as unmarried for purposes of the 1,100 different federal programs where being married makes a difference – from family medical leave, to social security survivor benefits, to veterans’ benefits. The Court’s answer to that question will determine whether DOMA falls.

For Edie, the important thing is to stand up to discrimination, something that she’s been doing all her adult life. Since the mid-1970s, Edie has been a leader in the LGBT rights community in New York, first quietly, and then with increasing confidence and vigor. Today she has become one of the most recognizable LGBT rights figures based on her tenacity and the strength of her story. And what a story hers is!

Edie and Thea got engaged back in 1967, not because they thought they’d actually be able to marry, but because getting engaged captured the kind of relationship they were building together. An engagement ring would have prompted unanswerable questions at Edie’s job at IBM, so Thea proposed with a circular pin of small diamonds instead. In 1977, Thea was diagnosed with progressive multiple sclerosis, which ultimately left her unable to walk. Edie and Thea dealt together with the challenges of M.S. for the next 30-plus years. They finally were able to marry in 2007, just two years before Thea died.

Edie soon discovered that she owed federal estate tax on all of the possessions that Thea had left her, including the apartment they had shared for decades. While New York considered Edie and Thea married, DOMA required the federal government to treat them as legal strangers. So Edie’s tax bill was $363,000, whereas it would have been $0 if she had been a straight widow. If you haven’t seen the video about Edie take a look, it’s quite moving.

Here’s hoping that today, when the Justices look out into the audience at the Supreme Court, they see a little old lady with a circular pin of small diamonds on her lapel, and realize just how wrong it is to treat her marriage to Thea as though it didn’t exist.