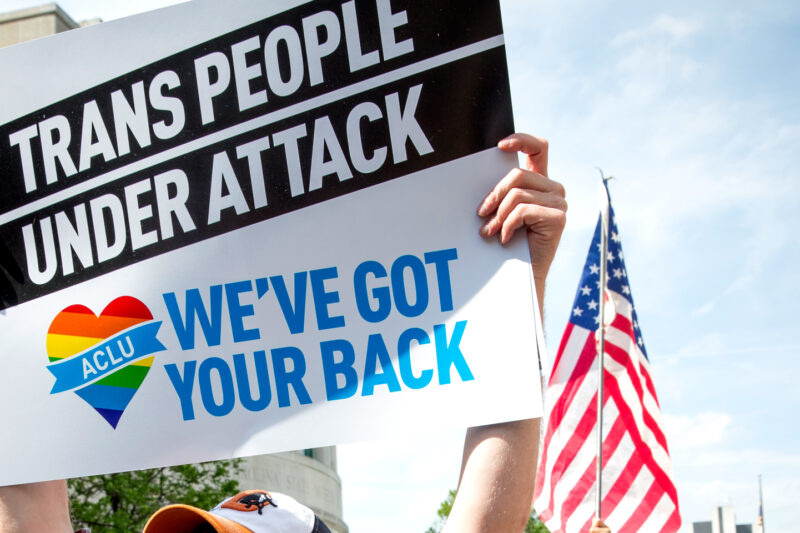 Like any good attorney, I enjoy winning and being right. However, as a transgender attorney watching the fallout from antitransgender legislation across the country spin out of control, this is one time I wanted to be wrong. I wanted to be wrong about the prediction that antitrans legislation and rhetoric would spur further discrimination and hostility towards all people, not just trans folks. Sadly, this hatred of trans people has had the exact result we anticipated: increased harassment of all people in bathrooms as well as continued pernicious violence against trans women.

Reports are rolling in from across the country of nontransgender women being policed and harassed in bathrooms. A 22-year-old Connecticut cisgender woman was harassed in a Wal-Mart bathroom this week because someone thought she was transgender. In Texas, where Lt. Gov. Dan Patrick has been unapologetic in his transphobia, a Texas woman trying to use a women’s restroom in a hospital was accosted by a man twice her size trying to make sure she was “going in the right place,” all because she was wearing a baseball hat with short hair.

And, of course, the violence and harassment of trans women has not stopped or decreased. Earlier this month, trans woman Reese Walker was murdered in Wichita, Kansas, a state that proposed legislation awarding students a $2,500 bounty if they reported trans people in the restroom. In Florida this last week, beloved trans woman Mercedes Successful was found murdered in a huge blow to the LGBT community in Haines City, Florida.

In Washington, D.C., this week, where transgender people are protected from discrimination under city law, a trans woman was assaulted by a security guard at a Giant grocery store. “You guys cannot keep coming in here and using our women’s restroom,” the guard told her as she pushed her out of the store. “They did not pass the law yet.” Also, in New York City, trans woman Pearl Love was verbally and physically attacked by a nontranswoman on a subway train in a video that went viral and prompted a response from presidential candidate Hilary Clinton.

It seems like things are going to get quite worse for trans people before they get better.

Just last night, Oklahoma lawmakers introduced SB1619, which requires schools to provide students a “religious exemption” if they are offended by trans students in school bathrooms. The real kicker to this bill is that a reasonable accommodation for transphobic students is not a single-user bathroom — like trans students have been forced to use — but rather a multi-user “trans-free” restroom, again demonstrating that at the heart of these bills is a devaluation of trans youth’s very existence.

Despite the fact that actual problems face many state legislatures, states like Georgia and Tennessee are going out of their way to arrange special sessions to discuss barring trans people from bathrooms in schools and public places. And in Washington State, a hateful ballot initiative is gathering steam that, among other things, would nullify state laws protecting trans people from discrimination and allow students to sue schools for up to $2,500 if they encounter a trans person in a bathroom.

If the whirlwind of 2016 has taught us anything, it’s that transphobia hurts all of us. It makes our communities and schools less safe and more heavily policed; it continues to assure the public that violence and exclusion of trans people from public life is the status quo; and it prevents all students from focusing on their education — an education that should arguably include values such as acceptance and compassion.

We must continue to fight back against these hateful messages and realize supporting trans people means supporting everyone’s right to dignity and justice.