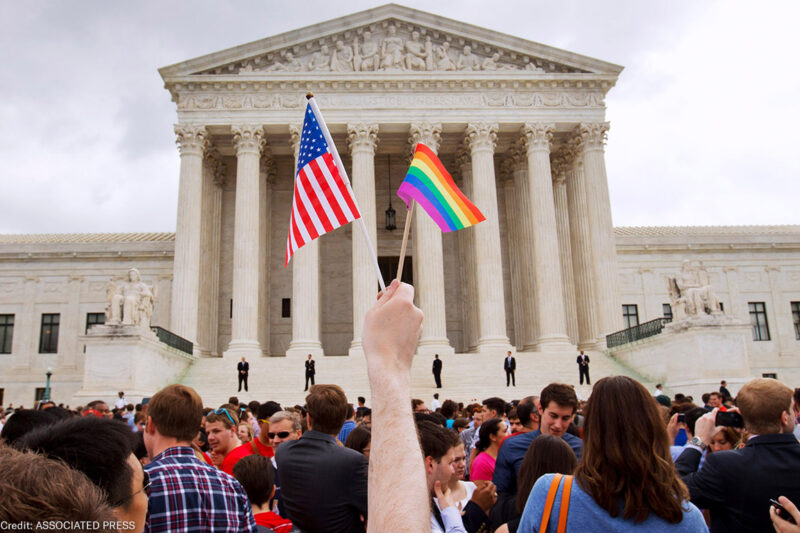 This week the Supreme Court heard arguments in three cases in which the Trump administration is urging the court to rule that it’s legal to fire workers for being LGBTQ.

For the LGBTQ civil rights movement, this is a big moment. These cases will affect more people than the Supreme Court’s decision about the freedom to marry, and they potentially implicate a broader range of contexts in which LGBTQ people may face harm, if the Court green-lights discrimination. Worse still, a bad ruling would strip away protections against discrimination that LGBTQ people have been able to use to protect themselves for two decades. And all this in a context where nearly one in three transgender people has experienced discrimination in the workplace.

In short, the stakes are very high.

One of the cases is about the rights of transgender people and involves Aimee Stephens, who worked for nearly six years as a funeral director at a funeral home near Detroit. Earlier in her life, Aimee had considered going into the ministry, but then found her calling in funeral services, where she could help comfort people in a time of great need. Her employer knew her as a man, but Aimee knew from five years old that she was female. After decades of hiding who she really was, Aimee could bear it no more, realizing that the only way to live was as her true self. She gathered the strength to come out to her family, friends, and co-workers as a woman. When she introduced herself as Aimee to her boss, he fired her. He made no pretense about any performance reason; he openly admitted that it was because she is transgender, saying, “this isn’t going to work out.”

The other two cases both involve men who were fired because they are gay. In one case, Gerald Bostock was fired from his job as a social worker for at-risk youth after his employer found out he was gay. The third case involves is Don Zarda, who worked as an instructor for a skydiving outfit on Long Island, New York. Don had become hooked on skydiving years earlier, and it evolved from being his passion to being his profession as well. He loved introducing others to the sport. Don often took customers on tandem jumps, where they are strapped to him shoulder-to-shoulder and hip-to-hip before they jump from the plane. One day, Don told a female customer that he was gay in an effort to make her less uncomfortable with how close they were physically. He thought nothing of the remark, but his boss later fired him for sharing “inappropriate information” with a customer.

When Don called his sister Melissa to tell her he’d been fired, her first reaction was surprise and disbelief. “It’s not legal to fire you because you’re gay,” she told him. And she’s right. Lower courts in both Don’s and Aimee’s cases ruled that their firings violate federal civil rights law, because the employers treated them differently because of their sex. After all, the courts reasoned, if Aimee had been assigned a female sex at birth, her employer would not have fired her for being and living as the woman she is. And if Don had been a woman attracted to men, as opposed to a man attracted to men, he would not have been fired for sharing that information with a customer.

Big picture: it’s hard to see how firing someone for being LGBTQ doesn’t involve the person’s sex. You can’t even describe being trans or gay without talking about the individuals’ sex. At its core, the federal ban on sex discrimination is simple: workers are not supposed to be treated differently because of their sex.

A ruling in these cases could affect non-LGBTQ people as well. A crucial Supreme Court precedent for Aimee and Don’s cases is that of Ann Hopkins. As an employee at accounting firm Price Waterhouse, Hopkins was passed over for partner and told she could increase her chances if she would “walk more femininely, talk more femininely, dress more femininely, wear make-up, have her hair styled, and wear jewelry.” The Supreme Court ruled that requiring her to conform to stereotypes associated with being a woman demonstrated sex discrimination.

Many federal courts have concluded that firing LGBTQ people because we don’t meet employers’ stereotypes of how women and men should act, identify, and appear is just as much sex discrimination as passing over Ann Hopkins because she was considered “macho.”

But if the Supreme Court says in Aimee’s and Don’s cases that this reasoning doesn’t apply to LGBTQ people, that could spell trouble for everyone. We could return to a world where employers can fire anyone — straight or gay, transgender or not — for not being the “right kind” of woman or man. Scary stuff.

The ACLU is proud to represent Aimee and Don, and to fight alongside Gerald, as we urge the Supreme Court not to roll back the rights of LGBTQ people and not to eviscerate sex discrimination protections for everyone else in the process.