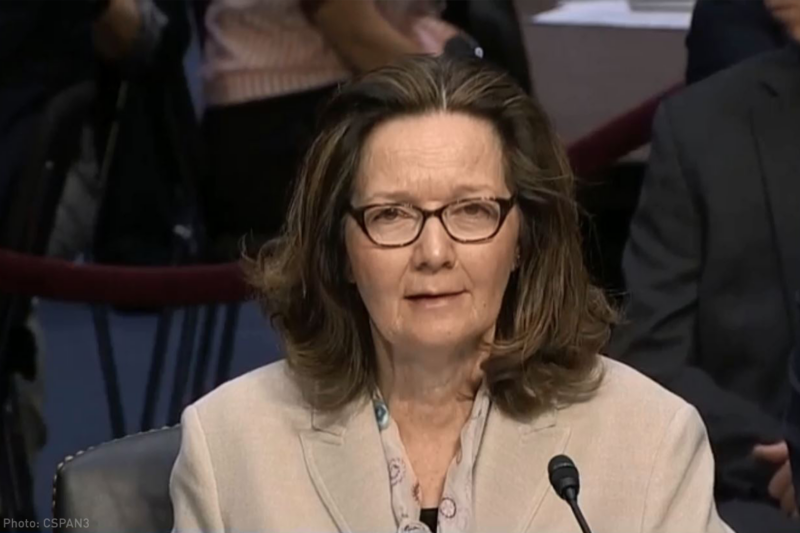 The nominee for the agency's director faced pointed questions but left some things unsaid.

President Trump’s nominee to be CIA director, Gina Haspel, faced pointed questions from the Senate Intelligence Committee Wednesday morning. Senators asked about her role in the agency’s torture program and its cover-up, including her role in the destruction of dozens of videotapes documenting torture.

Haspel, however, was far from forthright, regularly evading questions or giving only vague answers.

Here are some takeaways from the hearing:

Haspel refused to say if torture is immoral

Haspel told senators that she has a strong “moral compass,” but she refused to answer when Sen. Kamala Harris (D-Calif.) asked whether she found the CIA’s torture practices to be immoral. Sen. Martin Heinrich (D-Nev.) also noted that Haspel was “giving very legalistic answers to very fundamentally moral questions.”

The Daily Beast reported that when Haspel had a supervisory role over the torture of a detainee at a CIA black site, documents from the time “provide no indication that Haspel opposed it, let alone stopped it—particularly when CIA headquarters pushed to intensify the torture at a subsequent black site.”

In the hearing, Sen. Jack Reed (D-R.I.) told Haspel that “at the time that you were involved” in the torture program, “you expressed no moral concerns.”

When Sen. Ron Wyden (D-Ore.) asked Haspel if she ever called for the CIA’s torture program “to be continued or expanded” between 2005 and 2007, Haspel didn’t answer directly, only saying that she and her colleagues “believed in our work” and that she didn’t want to be put “on the sidelines.” Haspel even said that the real “tragedy” was “that the controversy surrounding the interrogation program” had “cast a shadow over what has been a major contribution to protecting this country.”

Wyden was troubled by her response, responding, “I would really like to have on the record whether you called for the program to be continued, which it sure sounds to me like your answer suggested.”

There is reason to believe that there was an effort in the CIA to expand the torture program at that time, as evidenced by a 2005 proposal uncovered in the ACLU’s lawsuit against the psychologists who helped devise the torture program. If Haspel did in fact advocate for the torture program from 2005 to 2007, it would have followed the publication of shocking photos of brutal torture at the Abu Ghraib prison in 2004. In 2005, the Senate passed Sen. John McCain’s anti-torture amendment and in December of that year, President Bush signed the Detainee Treatment Act into law. Everyone in Congress believed the CIA torture program was over — and it would be deeply problematic if Haspel was trying to keep it going.

In the run-up to the confirmation hearing, the CIA selectively declassified parts of Haspel’s record that paint her in a positive light, prompting senators to demand that more information be released.

As acting director of the CIA, Haspel has the authority to declassify documents about her own record. Under questioning from Sen. Angus King (I-Maine), Haspel admitted that she is the one who decides which documents the CIA will release, and she later refused to commit to recusing herself from the process.

By choosing which information about her own record is made public, Haspel effectively gets to decide which questions can be answered at the committee’s public hearing and which questions must be asked at the classified hearing. It would also raise significant conflict-of-interest concerns if Haspel, as CIA director, makes these decisions in response to Congressional requests for transparency or in court cases.

Under questioning from Sen. Dianne Feinstein (D-Calif), Haspel said that only one detainee was depicted in the 92 destroyed videotapes depicting the use of torture. Haspel drafted the cable ordering their destruction but strongly denied having a role in issuing the cable.

However, according to a document obtained in an ACLU Freedom of Information Act lawsuit, there were not one but two detainees featured in the videos, Abu Zubaydah and Abd Al-Rahim Al-Nashiri. Haspel was supervisor of the CIA black site where Nashiri was waterboarded and subjected to other torture tactics.

Haspel demurred when asked about Trump’s views of torture, insisting that while she would not want to restart torture, she didn’t think “the president would ask me to do that.”

Trump, of course, has in the past advocated for torture tactics “worse” than waterboarding and even said on the campaign trail that he would order officials to take illegal actions like torture. Such inhumane abuse is something that our officials should be repudiating as loudly as possible, not brushing aside.

She also faced questioning about a potential Trump loyalty pledge.

Last June, former FBI Director James Comey testified before the same committee that President Trump asked him for a pledge of personal loyalty.

Sen. Reed asked Haspel what she would do in such a scenario and if she would inform Congress if Trump made the same request of her. While Haspel said she would not fulfill a pledge of loyalty to Trump, she declined to say that she would tell Congress about such a request, instead saying, “It’s a hypothetical. I don’t think it’s going to occur.”

“It does not seem to be hypothetical,” Reed responded. “People have alleged that has happened already.”

Beyond her actual record, the Senate must consider both moral judgment and commitment to transparency and congressional oversight in assessing any nominee for director of the CIA. Haspel raised more questions than she answered today.