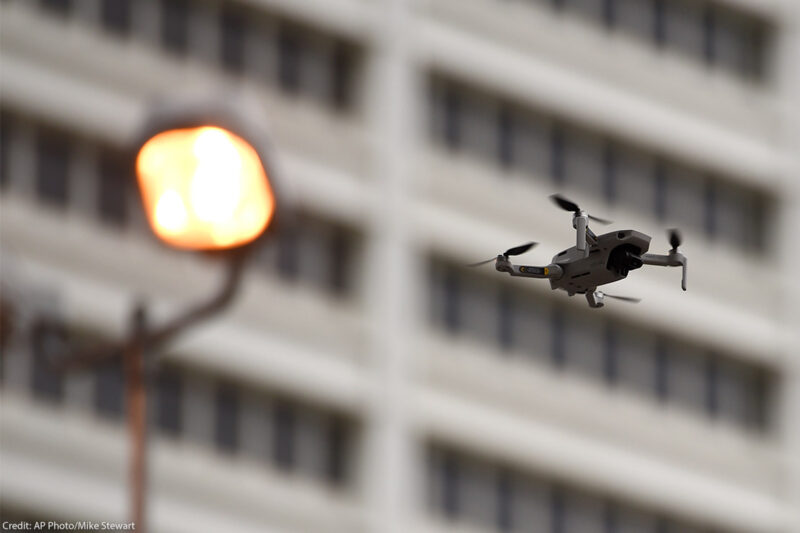 UPDATE (12/7/21): Eight of nine agencies named in the original FOIA request have not produced any documents. We filed a lawsuit today suing for relevant records.

In the midst of nationwide protests against police brutality, local, state, and federal law enforcement agencies have reacted with brutal force and widespread surveillance. Not only are many agencies suppressing protest and intimidating protestors with batons and tear gas on the ground — they are also circling overhead. The government is using a deeply invasive, coordinated aerial surveillance campaign to monitor Black Lives Matter protests, gather information, and surveil people exercising their First Amendment rights.

Today, we submitted Freedom of Information Act (FOIA) requests to the Federal Aviation Administration, Department of Homeland Security, and the Department of Justice calling for more information on the use of aerial surveillance on protesters.

The government has deployed helicopters, airplanes, and border drones over American cities to systematically monitor peaceful protests . An investigative report by the New York Times found that the Department of Homeland Security alone had logged at least 270 hours of surveillance footage on these racial justice protests this spring and summer. The collected footage was ultimately channeled into a digital network — accessible by federal and local law enforcement agencies for use in future investigations — with the ominous name “the Big Pipe.” Other law enforcement and military agencies, including the FBI, National Guard, and local police departments also requested deployment of private or government-owned aircraft for the purpose of surveilling protests. This widespread surveillance has been carried out across the country — from the big-city protests in NYC, Portland, Chicago and LA, to 20-person protests in small towns across the country.

This surveillance has also been carried out with an unjustifiable level of secrecy. Agencies like the FBI regularly try to hide the identity of their aircraft by registering them through dummy corporations. For weeks, U.S. Customs and Border Protection refused to say which agency had requested use of its Predator border drone over Minneapolis protests in May. Protesters and communities still have no idea what kind of cutting edge, high-tech equipment these aircraft — piloted and unpiloted — may be carrying.

As aerial surveillance continues, the public deserves much more information. In our FOIA requests, we are asking for information about the involvement of private companies; coordination between different law enforcement agencies; the processes by which surveillance flights are proposed, approved, or authorized; the scope of surveillance; the capabilities of the cameras and other surveillance tools deployed; and the surveillance footage itself.

We live in a democracy and Americans have a right to decide what kinds of surveillance law enforcement is permitted to engage in over our communities. But we can’t do that if we don’t know what’s going on.

A prime example of government policymaking that needs more sunlight is the FAA’s issuance of a “temporary flight restriction” over Portland in July, as that city became the center of renewed nationwide protests over police abuse in general and abusive practices by federal officers, sent to the city over local objections, in particular.

Unfortunately, there is a history of the FAA creating flight restrictions over protests at the request of law enforcement to limit the ability of reporters and community members to engage in aerial photography of police behavior. The agency restricted airspace over the Dakota Access Pipeline protests in 2016, and before that in Ferguson, Missouri during the 2014 protests following the death of Michael Brown. In 2014, documents and audio recordings proved that the purpose of the Ferguson no-fly zone was not the protection of public safety, as government agents claimed, but to keep news helicopters away.

In Portland, Oregon, the FAA’s restrictions prohibit drones except for those with “an approved special governmental interest airspace waiver that has been granted for operations in direct support of an active national defense, homeland security, law enforcement, firefighting, search and rescue or disaster response mission.”

In short, this flight restriction leaves room for government agencies to use aircraft to surveil the public, but severely limits the ability of the public to record the government. That may be how law enforcement agencies like it, but it’s exactly backward: Government surveillance of the public should be strictly regulated, but the public’s ability to monitor what law enforcement officials are doing should be broadly free and unrestricted. That is why protesters should be able to record the police using drones — and that is why we have filed a FOIA request to find out more about aerial surveillance of protests by law enforcement.