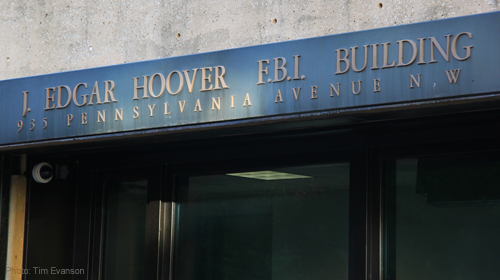 According to the Washington Post, new FBI Director James Comey is struggling with an FBI budget shortfall as a result of the sequester (even though the FBI budget more than doubled since 2001). Since we just finished Unleashed and Unaccountable, a detailed examination of the transformation of the FBI since 9/11, we thought we’d offer the new director a few ideas about programs that deserve to get the axe, because they’re ineffective, undermine innocent Americans’ privacy and civil liberties, or simply offend American values.

The motto on the Seal of the United States is “E Plurbis Unum,” or “Out of many, one,” but that’s not how the FBI sees it. The FBI uses intelligence authorities provided in the Attorney General’s Guidelines to collect racial and ethnic demographic data so it can identify and map racial and ethnic neighborhoods and “facilities.” It also tracks what it calls racial and ethnic “behaviors,” but it is fighting our Freedom of Information Act requests to see what these “behaviors” were, and how it has used its mapping authorities. The FBI identifies these racial and ethnic communities so they can target them for future investigation and intelligence collection, as it said in a press release, “[j]ust as putting push pins on a map will allow a local police chief to see clearly where the highest crime areas are.” Only these aren’t crimes the FBI is mapping, but innocent Americans targeted solely because of the color of their skin color, their national origin, or their religion. This program is antithetical to American values or equal justice and the FBI director should end it today.

Racial mapping is only one intelligence program the FBI runs under the Orwellian moniker of “Domain Management.” The FBI directs its special agents in charge at its field offices not just to enforce the law and protect national security in their territories, but to “Know Your Domain.” Former FBI Director Robert Mueller said knowing their domain means “understanding every inch of a given community – its geography, its populations, its economies and its vulnerabilities.” There’s no problem with a domestic intelligence agency knowing the geography and economies of a given area, but the FBI has no business gathering intelligence information about innocent Americans. And based on FBI documents obtained through FOIA, that’s exactly what it is doing. The ACLU found FBI intelligence agents in San Francisco mimicked FBI community outreach programs to gather information about the First Amendment-protected activities of community groups, which they often labeled “positive intelligence” and disseminated outside the FBI. Last year the ACLU called on the Justice Department Inspector General to investigate the FBI for Privacy Act violations resulting from this program, as have 22 members of Congress, but there is no indication the inspector general has started such an investigation. Director Comey should end this program.

Domain Management is only one type of intelligence collection platform the FBI has created to collect information on innocent Americans. In December 2008, as the Bush administration was walking out the door, it made sweeping modifications to the Attorney General’s Guidelines for FBI domestic operations that gave FBI agents the power to open intrusive investigations called “assessments” against individuals and groups without any reason to believe they were breaking the law or threatened national security. Rather than suspend these drastic changes when it came into power the following month, incoming Attorney General Eric Holder said during his confirmation hearings that he wanted “to see how these guidelines work in operation.” In the two years from March of 2009 to March 2011, the FBI opened more than 82,000 of these assessments of people and groups without a factual basis to suspect wrongdoing. Only 3,315 of these assessments found information sufficient to justify further investigation. Yet the FBI retains all of the detailed personal information gathered in the 78,000 assessments that found no evidence of wrongdoing essentially forever. The FBI shouldn’t be collecting, much less retaining, information on innocent Americans.

In 2009, the FBI established a new database called eGuardian to collect reports of “suspicious” behavior generated by state and local law enforcement agencies. Like many other suspicious activity reporting (SAR) programs, the standards governing the definition of “suspicious” conduct for reporting to eGuardian are extremely vague and over-broad, making it likely that reports will be based on racial or religious profiling or other bias. The ACLU of Northern California recently obtained hundreds of SARs from California, including many that were entered into eGuardian, which clearly show people are targeted based on racial and religious characteristics and First Amendment-protected activity like photography. The Government Accountability Office criticized the federal government’s SAR programs for failing to establish metrics to determine whether they actually improve security. Any program that violates rights and doesn’t improve security should be closed immediately.

The recent revelation about the FBI using the Patriot Act’s “business records provision” to collect all U.S. telephone call data in bulk is only the latest in a long line of abuse of these authorities, and likely only the tip of the iceberg. The government used a similar program to collect all metadata about Americans’ Internet use under another Patriot Act provision, which closed in 2011 because it was ineffective. Based on the government’s interpretation of the law surrounding such data collection, it is likely that there are other bulk data collection programs not receiving proper oversight. Twenty-six U.S. senators have written to the Director of National Intelligence James Clapper asking whether other programs operate, including whether the government is collecting cell-site location data. Americans have a right to privacy in their communications and associations, and suspicion-less bulk collection programs must end.

Spying on innocent people rarely helps find guilty people. We hope that by giving Director Comey a few ideas about FBI programs that can be cut to save expenses, he can turn his attention to other abusive FBI practices documented in the ACLU report. Ending practices that violate civil liberties won’t necessarily put the FBI’s budget back in the black, but it is still the right thing to do.