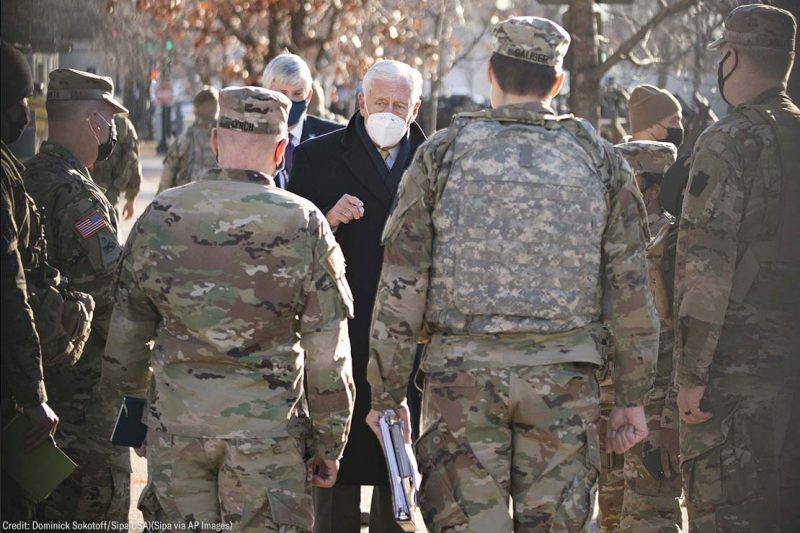 Thousands of service members are in a state of purgatory because of President Biden's failure to end Trump's harmful policy. Ending this policy is an easy step to honor the president’s pledge to immigrant service members.

Over 100 days into his administration, President Joe Biden has yet to act on a Trump administration policy denying thousands of immigrants serving in the U.S. military the path to citizenship promised to them by Congress. Rescinding this policy—which runs contrary to U.S. history, values, and laws—is a no-brainer. It is also consistent with Biden’s own campaign pledge to “protect and expand opportunities” for immigrants “who risked their lives in military service.” The Biden administration should seize the opportunity to honor this pledge by immediately withdrawing the Trump policy and abandoning the Trump administration’s defense of it in federal court.

As has been the case for over 70 years, before service members can apply for citizenship, the Defense Department must first certify their honorable service. This certification is a purely administrative task, consisting of looking up an individual’s service record and verifying honorable service to date. DoD’s longstanding practice was to issue certifications almost immediately after immigrants began their service so that they could become U.S. citizens prior to deployment. However, an October 2017 Trump administration policy required DoD to withhold certification until service members satisfied new preconditions, including a minimum service duration requirement. As a result, DoD denied thousands of immigrants in uniform the path to citizenship promised to them under federal law.

In April 2020, the ACLU filed a class action lawsuit on behalf of thousands of immigrants whose service in the U.S. military during a period of armed conflict entitles them to naturalize expeditiously but who were blocked from doing so by the Trump administration. Four months later, the U.S. District Court for the District of Columbia struck down portions of the Trump policy, ruling that the Immigration and Nationality Act “contains no minimum service requirement.” The court also held that those portions of the policy were unlawful because they were “arbitrary and capricious” under the Administrative Procedure Act. In October 2020, the Trump administration appealed this decision to the U.S. Court of Appeals for the D.C. Circuit.

The government’s opening brief to the D.C. circuit was due in early February, giving the Biden administration an easy opportunity to comply with federal law, the district court’s decision, and Biden’s campaign promise by simply withdrawing the appeal. However, the Justice Department has now sought four extensions, and the brief is currently due on June 2, in just under two weeks.

We don’t know what is holding up the Biden administration, but by continually punting the decision to withdraw the appeal and disavow the Trump policy, it has left thousands of service members in a state of purgatory. The prospect of an adverse decision, which would effectively upend the expedited naturalization process for immigrant service members, continues to loom over thousands of class members in this case.

The Biden administration’s failure to act is inexplicable. The Trump policy was a component of that administration’s punishing anti-immigrant agenda, targeted specifically at immigrants serving in the U.S. military. It forced these service members to deploy and wait prolonged periods before they could obtain citizenship. In doing so, it prevented service members from enjoying the privileges of citizenship, such as voting while serving to protect the United States, or traveling with a U.S. passport while serving overseas. Because of the Trump policy, service members who fell out of lawful immigration status while awaiting citizenship became vulnerable to placement in removal proceedings and deportation, notwithstanding their ongoing military service. On top of it all, the policy prevented many immigrants from advancing their military careers since many specialized roles for which they are best suited, such as in linguistics or information-technology, require U.S. citizenship.

The Trump policy also eviscerated naturalization through military service, the path to citizenship over 100,000 immigrants have taken since 9/11. In the year following the policy’s implementation, U.S. Citizenship and Immigration Services reported a 72-percent drop in military naturalization applications from pre-policy levels. In fact, many service members waited so long to naturalize that they could have obtained citizenship faster through the civilian process, defeating the very purpose of the expedited naturalization Congress intended for non-citizens serving in the U.S. military.

The Trump policy broke the promise of expedited citizenship Congress has made to immigrant service members for over 200 years. From the War of 1812 to the present, federal laws have reflected Congress’ intent that immigrants serving during wartime naturalize almost immediately upon entering service and prior to deployment. Since 1952, that promise has been codified in a provision of the Immigration and Nationality Act. As the U.S. District Court for the District of Columbia found in this case, the legislative history of that provision “is ripe with evidence that Congress intended that there be no minimum time-in-service required of a noncitizen enlistee in order to benefit from” the expedited path to citizenship. The legislative history also makes the reason for this intent clear: “if they are invited to fight and die for the United States, . . . they are good enough to come into citizenship.” Years later, when Congress expanded eligibility for expedited naturalization from those serving in World War II to those serving in future periods of conflict, it also explained that a service member should be “afforded an opportunity to acquire citizenship before he is assigned to active combat,” otherwise “the serviceman killed in action could never avail himself of the special benefits provided by his adopted country.”

The Biden administration’s failure to act on the Trump policy—either by withdrawing the appeal or rescinding the policy itself—is especially puzzling because the Trump policy so obviously conflicts with the administration’s promises on immigration reform. As part of the immigration plank of his campaign platform, Biden vowed to address the harms experienced by immigrant service members. He explicitly pledged in his first 100 days to “[p]rotect and expand opportunities” for immigrants “who risked their lives in military service” and to “restore faith in the citizenship process by removing roadblocks to naturalization.” And in a Feb. 2 executive order, he specifically ordered the secretary of state, attorney general, and secretary of homeland security to “develop a plan” within 60 days to “facilitate naturalization for . . . members of the military, in consultation with the Department of Defense.”

This failure to act is also disappointing because, as Senator Tammy Duckworth (D-IL) outlined in a January letter to then-President-elect Biden, immigrant service members face a legion of hurdles to citizenship that go beyond this specific Trump policy. The letter outlined a series of executive and agency actions the Biden administration could take in order to build on Biden’s stated “commitment to protect and expand citizenship opportunities for the brave men and women who have fought to defend our Nation.” A Biden administration serious about this commitment would not only address the Trump policy, but also begin to put this blueprint in action.

By rescinding the Trump policy, the Biden administration would be taking an easy step to honor the president’s pledge to immigrant service members. Thousands of service members are currently relying on that pledge and the restoration of the citizenship promise Congress made to them.

Update: On May 25, the D.C. Circuit granted the Justice Department’s fifth request for an extension on its opening brief, which is now due July 2.