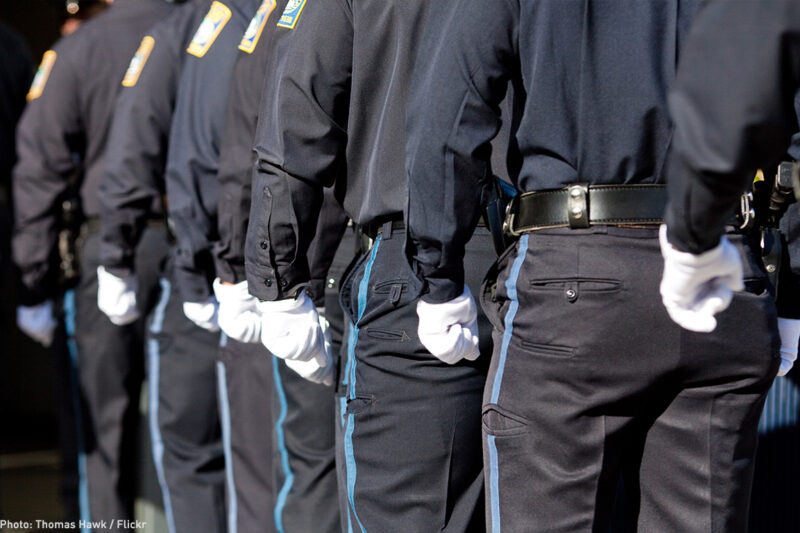 Muslims, people of color, LGBT people, dissidents, and immigrants have ample reasons to worry about our rights and freedoms under the Trump administration. But we don’t have to wait for the federal government to change hands to bolster our local defenses.

Advocates and activists in Boston are doing just that, by calling on the Boston Police Department to distance itself from harmful federal law enforcement programs and to stop sharing information about Bostonians with the federal government except for in narrow circumstances when it is absolutely necessary to investigate and prosecute crime.

Last week, a coalition of groups including the ACLU of Massachusetts sent a letter to the Boston Police Department cosigned by over two dozen community, religious, activist, and civil rights groups representing thousands of Bostonians and Massachusetts residents. The letter asks the BPD to enact key policy reforms to better protect vulnerable people and communities from federal targeting.

Specifically, the coalition calls on the Boston Police Department to end participation in federally funded “countering violent extremism” efforts, stop collecting and sharing information about people not suspected of actual criminal wrongdoing, remove its officers from the FBI’s Joint Terrorism Task Force operations, and publicly endorse and lobby for passage of the Safe Communities Act, a state bill that would restrict local police from acting as federal immigration agents and ban Massachusetts agencies from contributing to any “Muslim registry” system.

These policies and programs were problematic before the Trump administration came to power. Now, with him in the Oval Office and with Jeff Sessions as attorney general, the need for reform has taken on a new urgency.

Countering violent extremism — then and now

The Obama administration went to great lengths to argue that its CVE funding programs, orchestrated through the Departments of Homeland Security and Justice, were not aimed specifically at Muslims. Civil libertarians and Muslim community organizations disputed this claim, but since the Trump administration took power, pretense of CVE’s equal opportunity targeting has collapsed. Just days after Trump’s inauguration, the administration announced that all future CVE grants would only target so-called “radicalization” of Muslims, to the exclusion of white supremacists and other groups included under Obama’s version of the program.

Here in Massachusetts, the Boston Police Department is a party to a federally funded CVE program aimed at Somali youth in the city. In the grant application for the project, officials described “unaccountable times and unobserved spaces” as a potential risk factor for Somali youth in Boston — as if a teenager seeking privacy is somehow suspect or an indication of possible involvement in terrorism. Other supposed risk factors for Somali youth were “mistrust of law enforcement” and “lack of opportunities.” That reads like plain discrimination in a city where police are much more likely to stop young Black people for invasive questioning and searches and where the Somali community struggles with institutional barriers to access quality education and employment.

That is not to say that CVE should be expanded, as some in Congress seem to believe. The answer to a resurgent white supremacist movement in the United States is not to double down on the CVE model by including white nationalists among its targets. The ACLU joined dozens of organizations earlier this month in opposition to attempts to expand CVE.

“Each of the undersigned groups vigorously opposes the hatred, bigotry, and xenophobia expressed by white supremacists,” our letter reads, “but extending CVE to target these groups risks diverting security resources to policing political viewpoints, instead of focusing on lawless conduct.”

In addition to calling on the BPD to stop engaging with CVE programs, our coalition seeks new protections around intelligence gathering and sharing practices to ensure Bostonians are not put at risk of improper federal targeting.

The BPD should change its privacy policy to forbid the collection and sharing of information about people absent articulable, factually-based suspicion of criminal wrongdoing. Under existing police policy, law enforcement officials can collect and share with federal agencies information about people even when there’s no reason to believe they are involved in any wrongdoing. That policy is both bad for public safety and bad for civil liberties. It has enabled both inappropriate surveillance of activist groups and, in at least one case, detention and deportation proceedings against a Boston high school student.

A recent case shows exactly the harm of this kind of information sharing. In that case, a Boston police officer assigned to an East Boston high school documented a verbal fight that occurred in a cafeteria. In the incident report, the officer identified as a gang member a young man who wasn’t even involved in the dispute but happened to be standing nearby. The young man didn’t commit any crime, and apparently he wasn’t suspected of any criminal offense. (Police officers in cities across the country can designate people as “gang members” in secretive databases without so much as an allegation of criminal activity; the ACLU has sued the government for using unsubstantiated claims of gang affiliation to illegally detain teenagers.) The information in that report eventually made its way into ICE’s hands. As a result, ICE found, detained, and initiated deportation proceedings against the young man.

We only know about this story because his lawyer has gone public, detailing exactly how ICE came to learn of her client. She says he isn’t a gang member and is fighting his deportation order. We don’t know how many other times this has happened to young people of color in the city. We do know what could prevent it from happening again.

The federal government has a long arm, but there’s a lot local and state law enforcement can do to limit its ability to target and hurt our communities. We urge the Boston Police Department and the city’s leadership to make these commonsense reforms and for activists in other cities to demand the same of their leaders.