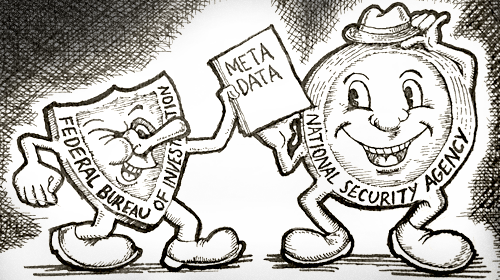 Early this summer, the Guardian published a monster story.

According to a document it obtained from a government whistleblower, later revealed as National Security Agency contractor Edward Snowden, the Guardian reported that the Foreign Intelligence Surveillance Court ordered Verizon Business Services to turn over all the records of its subscribers’ telephone calls on a daily ongoing basis for 90 days to the NSA. The order covered all records of calls between “the United States and abroad” and “wholly within the United States, including local telephone calls.” Soon after, it became apparent that this government demand wasn’t an exception but the rule for the last seven years, with similar record requests delivered to all the major phone companies.

Three months later, there’s no doubt the leak will be remembered for igniting the long overdue debate over civil liberties and security in the United States, as well as making the secretive NSA a household name. The critical role of one agency deeply involved in this scandal has not been fully examined, however, even though it requested the FISA Court order compelling companies to participate in the NSA’s bulk phone records collection program.

That agency is the Federal Bureau of Investigation.

Since 9/11, the FBI has once again transformed itself into a domestic intelligence agency with the unprecedented power to peer into the lives of ordinary Americans and secretly amass data about people not suspected of any wrongdoing. Through laws passed by Congress, such as the PATRIOT Act, as well as revisions to internal investigative guidelines meant to curb the abuses of the past, the FBI now has the authority to investigate and collect information on Americans without any evidence that they’ve committed a crime.

With so much power, the result was predictable.

Over the last 12 years, FBI agents have abused the new powers they were given to unfairly target immigrants, racial and religious minorities, and political dissidents for surveillance, infiltration, investigation, and disruption. Specifically, the ACLU has uncovered and documented persistent abuses, including warrantless wiretapping, racial and religious profiling, biased counterterrorism training materials, politically motivated investigations, abusive detention and interrogation practices, and misuse of the No-Fly List to recruit informants.

Tomorrow, the ACLU will release a report, “Unleashed and Unaccountable: The FBI’s Unchecked Abuse of Authority,” documenting the bureau’s expanded post-9/11 authorities, their impact on civil liberties in the United States, and the FBI’s evasion of oversight that enables abuses to continue today. Twelve years after 9/11, its time for the attorney general and Congress to revisit the extraordinary powers given to the federal government’s premier law enforcement agency in the haze of tragedy and initiate a top-to-bottom review of FBI policies and practices to identify and curtail any activities that are unconstitutional or easily misused.

The FBI serves a crucial role in protecting Americans from criminals and terrorists, but it must do so while guarding and respecting the rights that make the United States worth protecting. Liberty and security are not mutually exclusive: we can be both safe and free.

“Unleashed and Unaccountable: The FBI’s Unchecked Abuse of Authority” will be available here, tomorrow at 10 a.m.