Cheney Digs in on Legacy of Torture 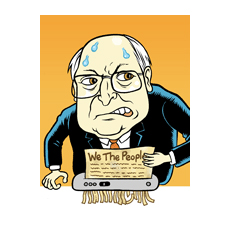 Former Vice President Dick Cheney’s brazenness is again on display this week as he promotes his new book In My Time. His comments in a recent interview coupled with excerpts from the book have served as a jarring reminder of the lack of accountability we’ve seen for the torture policies of the Bush administration.

The take-home message appears to be: He is not sorry. (The same unapologetic stance that a number of former Bush administration officials have maintained for a decade.)

For example, in promoting the book, Cheney has suggested that it is not the detentions at Guantánamo Bay that hurt America’s image abroad but rather critics who peddle falsehoods about it. He has also indicated that he is pleased that President Barack Obama has failed to close the prison in Guantánamo Bay, as he had pledged. These statements indicate that not only does the former vice president have no regrets, but that he actually believes the policies, that violated the rights of many people, are boast-worthy.

In an NBC interview with Jamie Gangel, Cheney said we should still be using “enhanced” interrogation. When asked if we should still use waterboarding as a tool for interrogating terror suspects even though many have condemned it, calling it torture, Cheney stated that he would strongly support waterboarding if it were the only way to get a “high value detainee” to talk.

Cheney has no regrets, even though the very policies that he wants his legacy to rest upon have been recognized as illegal and even criminal by the public and policymakers alike.

It’s impossible to forget that many Americans were disgusted by the Abu Ghraib revelations and the negative reports of torture and abuse that dominated the news for years. Following that scandal, the McCain anti-torture amendment aimed at the military passed the Senate by a 90-9 vote and became law.

Also, the Senate Armed Services Committee wrote an exhaustive report on the damage done by the military’s abuse of prisoners and held a series of hearings examining how the abuse hurt U.S. intelligence gathering and facilitated enemy recruitment. The Senate Intelligence Committee is currently undertaking a similar report on the CIA’s detention and interrogation program. In addition, both chambers of Congress voted in favor of limiting the intelligence community to the Army Field Manual’s interrogation techniques to make clear that the torture prohibition was absolute.

And more recently, after the killing of Osama bin Laden Sen. John McCain delivered a floor speech attributing the successes of Seal Team 6 to practically everything under the sun with the exception of the use of torture.

However, as we’ve seen again this week, the former vice president remains free to boast of his ‘tough’ interrogation polices because there has been little to no effort to hold Bush administration officials accountable for the torture and abuses they oversaw. Unfortunately, the Obama administration has made it clear that they would rather look forward and not back.

But holding those responsible accountable for their actions is critical to ensure that we never return to a time where torture is authorized against anyone. The Bush administration’s torture polices may have been marginalized, hopefully to the point of no return, but the only way to ensure that is through accountability.

Follow us on Twitter where we’ll tweeting live on Friday, September 9, 2011 from 9-10 a.m. EDT from an event hosted by the American Enterprise Institute where former vice president Dick Cheney will speak. The event is a 9/11 anniversary conversation entitled “Ten Years After: Lessons Learned, Lessons Unlearned.”