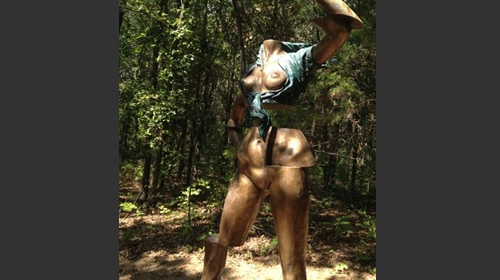 A set of bronze boobs has sent a group of citizens in Kansas into a tizzy. Offended by a statue depicting a woman’s breasts, they are now stepping up their fight against a statue in the Overland Park Arboretum, just south of Kansas City.

“Accept or Reject” (pictured above) is a bronze sculpture donated to the arboretum by sculptor Yu Chang, depicting a fractured, topless woman taking a photograph of her exposed (bronze) breasts. In 2012, a group of Kansans, organized by the American Family Association (AFA), circulated a petition to convene a grand jury for the purpose of deciding whether the popular statue was illegally “obscene.” They got the necessary signatures, and a grand jury of Kansas citizens gathered to… criminally investigate the statue. Fortunately, the grand jury looked at the statue, looked at state obscenity law, and determined that the “sculpture in question did not meet the legal definition of obscenity.” While the sculpture avoided a criminal record, the taxpayers didn’t avoid a hefty bill for this misguided attempt to criminalize art. According to city officials, they spent over $35,000 to defend the statue in her bare-breasted glory. Undeterred, the AFA is now leading a second attempt to bring the sculpture to criminal court.

How is this even possible? First, a bit of background.

Kansas is among a small handful of states that have a citizen-empanelled grand jury law on the books. Under this process, a group can start a petition drive to seek a particular criminal indictment. If they reach the required number of signatures — around 4,000 in Johnson County, Kansas — a grand jury is empanelled to investigate violations of Kansas law. But until this year, the citizens’ influence over the process stopped there.

That changed in 2013. Angry after a string of grand juries failed to return indictments alleging illegal abortion and pornography, groups like Kansans for Life advocated for a bill expanding citizen involvement in the grand jury process. The bill passed and is now law. Now the law requires the grand jury to call the petition organizer as its first witness, and permits the jury to pay for a special counsel or investigator of its choosing — even to replace the government prosecutor. Empowered by the expanded role of citizens in the grand jury process, the AFA is taking a second swing at the bronze breasts in the arboretum, and has started a second signature drive.

In the overwhelming majority of states, it is the government prosecutor, bound by both legal ethics and an oath to the U.S. Constitution, who acts as gatekeeper to our criminal justice system. It is critical that the indictment process is governed by considerable legal judgment and sensitivity to constitutional rights. In fact, you might call those protections the beating heart of our apolitical justice system. The AFA’s repeat attempts to morph art into obscenity perfectly illustrate the constitutional risk in turning the criminal justice system over to private citizens.

Running afoul of the First Amendment

The First Amendment, and the opinions of the Supreme Court, hold this kind of art to be protected expression, not criminal obscenity. Under the law, “obscenity” has a specific meaning: it’s something that appeals to a “prurient” interest (that is, it’s sexually exciting) and is devoid of any cultural, literary, or artistic merit. That’s a tough bar for any sculpture to meet, since regardless of whether any one individual values or likes a particular piece of art, it’s incredibly difficult to prove that a piece of art is devoid of artistic value as a whole. And repeatedly bringing a piece of art into the criminal justice system is not only unconstitutional, it risks chilling future artistic work. If the people of Florence had threatened to haul Michelangelo’s David before a people’s tribunal, he might never have gone on to paint all those nudes in the Sistine Chapel.

So, let’s say AFA were to succeed in its second go-round, and convince a grand jury that the statue qualifies as evidence of a crime. What would city officials have do? First, they’d have to figure out whom to indict. The AFA’s first petition didn’t specify whom — or, perhaps, what — would be indicted. Just that the “alleged violation” was the “sculpture” itself. And if city officials did act on an indictment — perhaps against the sculpture, the artist, the arboretum, or the city itself — the $35,000 it cost the city to defend the statue would be just the beginning for the taxpayers of Johnson County, who would then be vulnerable to constitutional arguments that any indictment ran afoul of the First Amendment. (Psst: if any Kansas judges are reading this, the ACLU would be delighted to be appointed to represent the statue in court.) So, the grand jury proceeding can only lead to one of two outcomes: An empty symbolic gesture, or an expensive and unconstitutional criminal prosecution.

It’s not news that boobs can set off controversy. After all, our own former Attorney General John Ashcroft ordered expensive curtains that hid the bare breast of the sculpture “Spirit of Justice.” A federal court recently ruled that students have the right to wear “I (heart) Boobies” bracelets to school in support of breast cancer awareness, after school officials objected. Even the U.S. mint issued the short-lived “bare-breasted Standing Liberty Quarter,” rescinded after public outcry.

In this grand American tradition of getting upset about breasts, the AFA and its supporters are in good company. They have every constitutional right to advocate against a topless statue, to collect petition signatures to plead their case with the city and ask for it to be moved or taken down, and to rally its members behind a campaign to install better-clothed public art. But our constitutional democracy does not allow a group of citizens to use the criminal justice system as a tool to censor constitutionally-protected expression. The same amendment — our first! — in all its wisdom protects both the statue’s right to bare its breasts and the citizens’ right to object to them. Just not to warp the criminal justice system to achieve an unconstitutional outcome.