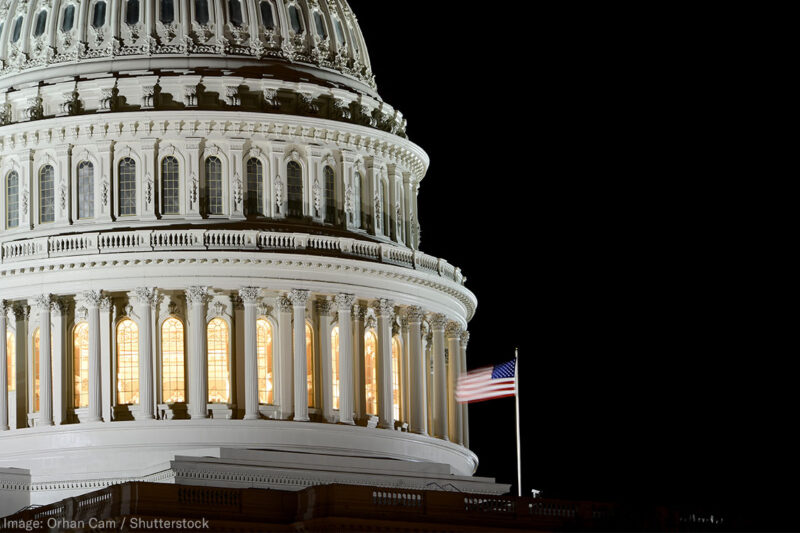 Congress today missed a historic opportunity to reform an unconstitutional surveillance law, instead passing a version that makes it worse. Both Democrats and Republicans deserve sharp criticism for continuing to allow the NSA to engage in mass, warrantless spying.

(You can see how your member of Congress voted here and here, so they can be held accountable.)

The vote concerned Section 702 of the Foreign Intelligence Surveillance Act — a law disclosed by Edward Snowden that revealed the NSA had been spying on Americans in unprecedented ways. As a result of the expiration of this law, Congress needed to decide, for the first time since those revelations, whether to reform, reauthorize, or do away with the law altogether.

For years, the government claimed that Section 702 was primarily used to stop foreign terrorists. In 2013, we learned that was a lie. The government uses the hundreds of millions of communications collected under Section 702 — which it gets directly from tech companies or by tapping into the physical infrastructure that makes up the internet — to access the sensitive information of Americans for purposes that have nothing to do with national security.

Intelligence agencies, for example, have long exploited a loophole to conduct warrantless searches of Americans’ data collected under Section 702. The NSA conducts over 30,000 of these “backdoor” searches a year and, while the FBI refuses to report their number, we know they perform these searches routinely when investigating a crime, assessing whether they should open an investigation, or even just hunting for information about foreign affairs.

Members of both parties took a stand and joined together to try to close this “backdoor search” loophole and require the government to get a warrant when looking for information about Americans. Sens. Ron Wyden (D-Ore.) and Rand Paul (R-Ky.), along with Reps. Justin Amash (R-Mich.), Zoe Lofgren (D-Calif.), and Ted Poe (R-Texas) pushed until the very last minute for a warrant requirement — but their efforts were stonewalled by the intelligence agencies, the Trump White House, Republican leadership in the House and Senate, and the Democratic leader in the House.

Instead, the House pushed through a bill that fails to reform — and in some ways worsens — current law. Not to be outdone, the Senate today passed the same bill, without allowing even one minute of debate on how this bill could be improved. It now heads to the president, who is expected to sign it into law.

The bill risks codifying illegal practices that have been used to collect purely domestic communications. It will also allow warrantless backdoor searches of Americans’ information to continue largely untouched, imposing a warrant requirement only in cases of an established criminal investigation.

The FBI acknowledges this limitation is unlikely to apply in the vast majority of cases. This is because agents usually perform such searches before opening an active investigation. In addition, the bill has an exception for “foreign intelligence” searches, which could include searches designed simply to find information about foreign affairs.

In other words, Congress has left this loophole wide open for exploitation by an administration openly hostile to critics, immigrants, Muslims, and people of color. The administration can too easily use this as a tool to further their discriminatory and unconstitutional policies.

But there is a glimmer of light.

The last few weeks have demonstrated that bipartisan efforts to reform our surveillance laws continue on an arc of progress. With only two more votes, reformers could have halted this bill from advancing and forced a floor debate over badly needed improvements. And an effort to pass the most comprehensive Section 702 reform bill introduced in Congress garnered the support of over 180 members in the House. With actual debate, real reform provisions likely would have passed. Such support for reform would have been unthinkable seven years ago.

Next steps for surveillance reform

The expiration was a lost opportunity for Section 702 reform. But the debate over the law is far from over.

Next year, Congress will again debate expiring surveillance provisions in the USA Patriot Act, providing a renewed opportunity to again force reexamination of our surveillance laws. But Congress doesn’t have to wait for an expiration to act. And reformers can try to force reform through other avenues, as they’ve done before.

The ACLU is also carrying on the fight against Section 702 in the courts. Our challenge to the NSA’s mass searching of internet communications under Section 702 continues to move forward. At the same time, we are representing Xiaoxing Xi, a Chinese-American physics professor who is challenging his baseless prosecution by the government and the unconstitutional spying that led to it. And finally, a federal appeals court is poised to consider the constitutionality of Section 702 surveillance in a criminal case that demonstrates why this warrantless spying violates the Fourth Amendment and Americans’ privacy rights. (Our brief in the case is here.) Rulings in any of these cases addressing the constitutionality of Section 702 could require Congress to revisit the law.

The pressure to reform our laws could also come from across the Atlantic. It is likely that the Privacy Shield agreement between the U.S. and the European Union — which governs transatlantic data transfers and is relied upon by thousands of U.S. businesses to service European customers and perform day-to-day activities — will be challenged in European courts. Those courts have previously struck down similar agreements over concerns that they did not adequately consider whether U.S. surveillance laws comported with EU standards. If the Privacy Shield is similarly struck down, surveillance reform may quickly become an economic imperative.

In the meantime, Congress can and should exercise its oversight authority. Members can demand that the intelligence agencies deliver on broken promises to provide information about how the law affects Americans. And, they can be vigilant to ensure that additional abuses of the law are brought to light.

No one said surveillance reform was going to be easy. But it’s certainly not dead.