Dear TSA, My Football Preferences and Vacation Plans are None of your Business: A First-Hand Experience With the TSA’s “Chat-Downs” 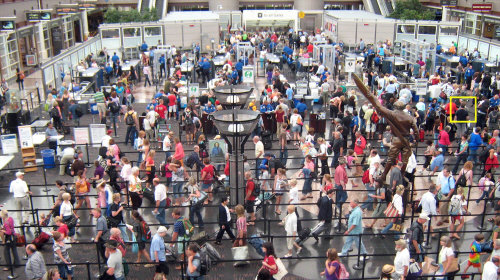 I was scheduled to return from my summer vacation at 6 a.m. Sunday morning flying out of Vermont’s Burlington International Airport in a state most often thought to be ahead of the civil liberties curve. If you’ve ever had a crack-of-dawn flight, you can relate to my blurry eyed exhaustion after waking up at 3:30 a.m. to make it to the airport with enough time for what we now consider to be the standard, if annoying, airport security rigmarole. I expected to have to strip off my belt and sweatshirt, take off my shoes, show my ID, and be subjected to a naked body scan or all-too-personal pat down. What I didn’t expect was a full-on TSA interrogation about my summer vacation before I even reached the identification checkpoint. 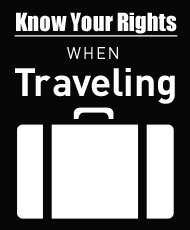 That morning the security line was far longer than usual; my husband and I slowly snaked along the line dividers as folks began pulling out their toothpaste and laptops. As we got closer to the front of the line, I noticed a TSA agent stationed in front of the ID check, just outside of the line dividers, with no apparent assignment other than to chat with the waiting passengers.

As we inched closer, I heard the chatty agent try to strike up a conversation with the man in front of us about his New England Patriots sweatshirt. “Hey, the Pats are playing in a preseason game with the Eagles on Monday, huh? I’m an Eagles fan myself.” In classic New England style, the questioned passenger shrugged disinterestedly, muttered “whatever,” and shuffled along. (I say this as New Englander myself.) My first thought was, “what a rude way to treat this poor agent who is just trying to do his job.”

The agent then turned to me with grin that was a bit perky for even my taste given the early hour. “So where are you folks off to?” he energetically inquired.

I like to think that I’m a friendly person, so I answered him, expecting a brief innocuous exchange about the Washington DC heat and the scourge of Capitol Hill gridlock. Instead, the agent responded to my answer with a barrage of questions about where in Vermont we had stayed, how long we had traveled, and why we had traveled there. I could feel a suspicious expression involuntarily creep across my face. The New Englander inside me was screaming “you don’t know this person from a hole in the wall and you certainly don’t want to divulge to him the details of your family vacation!” And yet it seemed that the more discomfort I expressed, the more persistent the agent’s questioning became, following us down the line, grilling me unrelentingly about our vacation plans and baggage status.

When we finally passed through security, I turned to my husband and asked, “What on earth was that all about?” My husband shrugged and suggested that perhaps the agent was just a chatty guy. To me it felt entirely inappropriate and intrusive.

It was only after I fully reentered the world of easy Internet access that I saw that while I was on vacation I had missed a news breaking New York Times article about the “controversial” use of “behavioral officers” at Logan Airport in Boston, Massachusetts. I don’t work on airline security issues for the ACLU, so I hadn’t known about this program. According to the Times, “behavioral assessments” were being used at Logan not only to scan the lines of passengers for unusual activity, but also to “speak individually with each passenger and gauge their reactions while asking about their trip or for other information.” Sound familiar? And it turns out that this airport “assessment” procedure is not only an inappropriate invasion of privacy, as I experienced. According to U.S. federal officials, it’s also leading to increased racial profiling, in part in response to managerial pressure to meet certain threshold referral numbers. Of course, many minority communities have been suffering discriminatory secondary checks and unjustified delays at airports for years.

Apparently it’s not enough for TSA to examine every inch of our bodies and personal effects; they are now asserting the right to search our conscience through pre-boarding cross-examinations. And to what end? The Government Accountability Office concluded in a 2010 report that no behavioral detection program has ever been scientifically validated. There is also considerable doubt among scientists about the usefulness of the methodology with behavioral researchers asserting that TSA agents “would achieve similar hit rates if they flipped a coin.”

To be clear, I have nothing but respect for friendly TSA agents who do their best to make the security experience more tolerable by making small talk with impatient passengers. I have nothing but smiles for the ID checker that cracks a joke about my license picture or the enormity of my carryon. But there is a world of difference between friendly small talk and unwelcome interrogation about my personal business. I never want to have to second-guess my travel plans and itinerary or consider how they might appear to a government agent.

I won’t be volunteering any more personal information to the next TSA agent that interrogates me while I’m in line for airport security. The next time I encounter a TSA “behavioral officer” I intend to invoke a tried and true New England adage that served my ancestors well: Mind your own business.