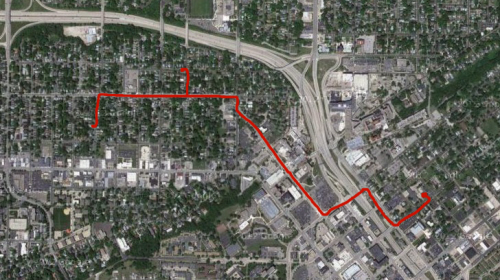 The PBS series NOVA, “Rise of the Drones,” recently aired a segment detailing the capabilities of a powerful aerial surveillance system known as ARGUS-IS, which is basically a super-high, 1.8 gigapixel resolution camera that can be mounted on a drone. As demonstrated in this clip, the system is capable of high-resolution monitoring and recording of an entire city. (The clip was written about in DefenseTech and in Slate.)

In the clip, the developer explains how the technology (which he also refers to with the apt name “Wide Area Persistent Stare”) is “equivalent to having up to a hundred Predators look at an area the size of a medium-sized city at once.”

ARGUS produces a high-resolution video image that covers 15 square miles. It’s all streamed to the ground and stored, and operators can zoom in upon any small area and watch the footage of that spot. Essentially, it is an animated, aerial version of the gigapixel cameras that got some attention for super-high resolution photographs created at Obama’s first inauguration and at a Vancouver Canucks fan gathering.

At first I didn’t think too much about this video because it seemed to be an utterly expected continuation of existing trends in camera power. But since it was brought to my attention, this technology keeps coming back up in my conversations with colleagues and in my thoughts. I think that’s because it is such a concrete embodiment of the “nightmare scenario” for drones, or at least several core elements of it.

First, it’s the culmination of the trend towards ever-more-pervasive surveillance cameras in American life. We’ve been objecting to that trend for years, and many of our public spaces are now under 24/7 video surveillance—often by cameras owned and operated by the police. But even in our most pessimistic moments, I don’t think we thought that every street, empty lot, garden, and field would be subject to video monitoring anytime soon. But that is precisely what this technology could enable. We’ve speculated about self-organizing swarms of drones being used to blanket entire cities with surveillance, but this technology makes it clear that nothing that complicated is required.

Second and more significantly to me, this technology also makes real a key threat that drones pose to privacy that we’ve talked about: the ability to do location tracking. The video shows cars and pedestrians near Quantico, Virginia automatically tagged with colored boxes, which follow them as they move around. As the technology’s developer told NOVA,

The surveillance potential of such a tracking algorithm attached to such powerful cameras is worth pausing to think about. To identify someone there’s no need for face or license-plate recognition (which may be impractical from above anyhow), cell phone tracking, gait recognition, or what have you. Even knowing where a little green square starts and finishes its day can reveal a lot, because it turns out that even relatively rough location information about a person will often identify them uniquely. For example, according to this study, just knowing the zip code (actually census tract, which is basically equivalent) of where you work, and where you live, will uniquely identify 5% of the population, and for half of Americans will place them in a group of 21 people or fewer. If you know the “census blocks” where somebody works and lives (an area roughly the size of a block in a city, but much larger in rural areas), the accuracy is much higher, with at least half the population being uniquely identified.

However, ARGUS-type tracking could be used to get more precise data than that—in many cases, to determine a vehicle’s home address, which pretty much reveals who you are if you’re in a single-family home, and narrows it down pretty well even if you’re in a large apartment building. (Academic papers have been written on inferring home address from location data sets.) Add work address and I expect that would nail virtually everybody. And of course lodged in the data set would be not just where a particular vehicle starts and finishes its day, but all the places it stopped in between—potentially revealing, as we so often point out, an array of information about a person such as their political, religious, and sexual activities.

True, such tracking using ARGUS would be disrupted whenever a subject disappears from aerial view. For example, pedestrians who travel by subway or bus or walk under foliage, or vehicles entering tunnels, would be harder to track. But even there, datamining large data sets collected over time could probably reveal a lot of things about people’s daily patterns and I would bet could eventually be used to identify a surprisingly large number of them. I expect that ARGUS would be used (if it’s not already) to generate a database consisting of location tracks of moving vehicles or pedestrians beginning in one place and ending in another. Think of them as little strings on a map. Some of these strings would stretch from a person’s home to their work, with stops in between, while others might be fragments, interrupted by a tunnel or other obstruction. But even the fragments, when the dimension of time is added to the equation, could probably be correlated together.

Of course low-lying clouds or fog might also interfere with aerial tracking, though imaging technologies already in existence could probably be deployed to see through them.

NOVA was not allowed to show images of the ARGUS censor, and stated that part of the program remained classified, including whether it has yet been deployed. (Though, we know it has been deployed domestically at least once, over Virginia as shown on NOVA. I’m going to assume it has not been deployed domestically in any more routine manner.) But, it is good that the Air Force allowed NOVA to see its capabilities. I’d like to think it’s because as Americans, Air Force officials have respect for our country’s values and democratic processes and don’t want to let such powerful and potentially privacy-invasive tools to be created in secret. It could also be, however, because the Air Force needs private-sector help in figuring out how to analyze the oceans of data the device can collect (5,000 hours of high-def video per day).

Either way, it’s important for the public to be aware of the kinds of technologies that are out there so that it can better decide how drones should be regulated.