EXISTENCE OR NONEXISTENCE: CIA’s Linguistic Somersault Takes to the Sky 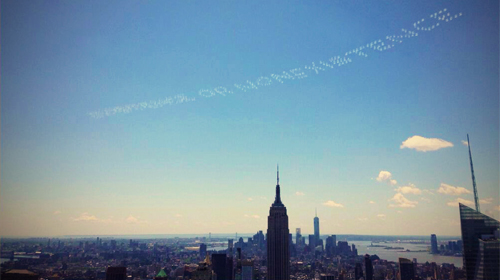 This past Memorial Day weekend, New Yorkers who happened to look up may have seen the words EXISTENCE OR NONEXISTENCE appear across the skyline in synchronized bursts of white smoke.

The seemingly spontaneous event was a project of mine called Severe Clear. It was inspired by a letter the CIA sent the ACLU rejecting their Freedom of Information Act request for documents relating to the U.S. government’s classified drone program. The letter reiterates the now familiar Glomar response, stating that the agency can “neither confirm nor deny the existence or nonexistence” of records responsive to the request.

For years, the American Civil Liberties Union has been fighting in court to try to force the government to acknowledge its secret drone program. The use of drones by the Pentagon is official and constitutes a key component in the military’s increasingly automated arsenal. But their use by the CIA for the purposes of targeted assassination remains unofficial, despite widespread reporting in the press as a result of White House-sanctioned leaks. This classified program remains unconstrained by judicial or congressional oversight, even in such extreme cases as the targeting of American citizens.

My interest is in the wording of the CIA’s rejection letter – a linguistic somersault that takes legislative precision and turns it into a kind of esoteric, existential rhetoric. Like a line from Kafka composed in bureaucratic prose, it tells us, in the most precise terms, nothing, except that the absence of affirmation does not imply it exists.

Whatever “it” may be.

The act of decontextualizing this phrase, and transplanting it from a legal document into something as ethereal and ephemeral as clouds in the sky, opens it up to multiple readings. Seen from below, the words could be interpreted as relating to a spiritual or religious epiphany or an agnostic response to the question of faith.

Or they might be construed as a meditation on the afterlife or the existence of UFOs: a not entirely inappropriate response given the rapid proliferation of drones populating our skies over the past decade. Anyone familiar with the ongoing litigation would likely recognize the wording for what it is. Yet on that clear day in May, many were left simply asking themselves, “What does this mean?” It’s a valid question that ordinary citizens would do well to ask their government.

Skywriting was invented by British air force pilots during the First World War as a way of making military signals visible over long distances. Today, it is the very piloted planes themselves that are being phased out by the U.S. Department of Defense in favor of unmanned aircraft.

Memorial Day is a public holiday that commemorates the lives of Americans who have died during wartime. It’s a resonant date given the implications of drone warfare, which amount to a reduction in the number of U.S. casualties, contrasting with a steady creep in the number of undocumented civilian casualties in countries such as Pakistan, Afghanistan, Yemen and Somalia. And with the redefining of the term “militant” to include any male of fighting age killed in the proximity of an air strike, the existence or nonexistence of “collateral damage” is increasingly becoming a subject of contestation.

On the day of the skywriting, I went to the summit of the Empire State Building and took a photograph, facing south toward the World Trade Center’s new Freedom Tower. This tension between the social, economic and ideological conceptions of freedom and empire is, for me, an important part of the work. In addition to my own documentation, word of the event spread across social media thanks to the number of people who posted images online, and a supportive tweet from the British actor and political commentator Stephen Fry to his seven million followers.

Then, less than a week after the skywriting appeared over New York, the CIA officially launched into the Twittersphere with its maiden message: “We can neither confirm nor deny that this is our first tweet.”

David Birkin is a British-born artist based in New York. He is a graduate of Oxford University and the Slade School of Fine Art, and was an artist in residence on VLA’s Art & Law Program and an ISP fellow at the Whitney Museum of American Art. He would like to thank a/political for their support in making this project possible.