A FOIA White Out 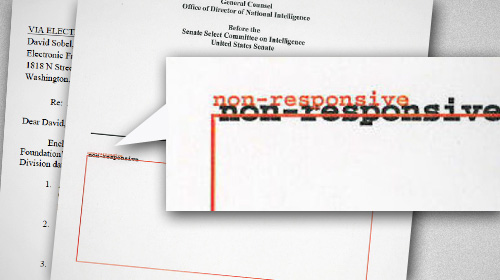 As we wrote a few weeks ago, one of the main issues discussed on the Senate floor during the FISA debate was secret law. Under the law, the Foreign Intelligence Surveillance Court makes secret interpretations and secret rulings about something that should never be secret: our constitutional rights. Sen. Jeff Merkley (D-OR) fought for an amendment that would have required the administration to release the court’s opinions, to provide unclassified summaries of them, or to certify how many there are and why they can’t be released.

While that amendment failed, Merkley extracted a promise from Intelligence Committee Chairman Dianne Feinstein to find some way to get the information in those court opinions out into public view. The administration has been reviewing those opinions for a few years now with an eye towards disclosure but hasn’t released any of them or explained where they are in the process. Having the top dog on intelligence in the Senate pressing for disclosure may provide the extra oomph to shake them loose.

Let’s hope so, because a FOIA from the Electronic Frontier Foundation has turned up a bunch of redacted statements that is literally a white out. In 2012, EFF filed FOIA requests for secret court opinions, referenced in the New York Times, which found government surveillance under FISA unconstitutional. In return, the EFF received: 1) notice from the Department of Justice’s National Security Division that there are several documents that they won’t see, at all, ever, and 2) copies of the administration’s classified testimony on FISA– completely redacted. (You can find copies here.)

This is why the American people need senators like Merkley. Without pressure from Congress, the national security establishment will continue sucking up communications of people inside the United States without transparency or accountability.