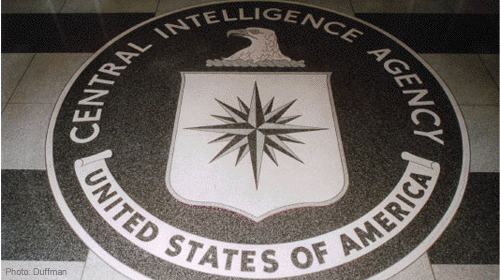 Back in 2012, the ACLU of Massachusetts published a report called ‘Policing Dissent’, exposing the Boston Police Department’s ‘red squad’ surveillance operations, directed at antiwar and economic justice organizers. Among thedocuments we obtained through a public records lawsuit were so-called ‘intelligence reports’ from the Boston police fusion center, the Boston Regional Intelligence Center (BRIC). These documents shocked the public. In files labeled “HOMESEC-DOMESTIC”, “GROUPS-CIVIL DISTURBANCE”, and “GROUPS-EXTREMISTS”, detectives described the entirely peaceful activities of groups and individuals ranging from Veterans for Peace and CodePink to Howard Zinn and a former city council member.

While the BPD files didn’t explicitly call these non-violent activists ‘terrorists’, detectives working at a so-called ‘counterterrorism fusion center’ came about as close as they could get to doing so without spelling out the T word in black and white. But it’s no secret that other law enforcement agencies jumped that shark long ago. In recent years, undercover informants have infiltrated antiwar movements targeted as “domestic terrorists”. While the past decade’s terror wars have given local, state, and federal law enforcement seemingly endless funds to pursue activists simply for challenging government policy, the US government’s conflation of peaceful dissent with terrorism has a long history in the United States, dating back at least to the 1970s.

called his top aides together and said he was adamant that MHCHAOS would not be “stopped simply because some members of the organization [the CIA] do not like this activity.” He made changes in order to protect the program more now that the [dissident officers were] so determined to have it end. To the maximum extent possible, within the agency, the program and the agent then in charge of it, Richard Ober, would be identified with terrorism and not with American dissidents. The massive program would in fact have the same functions it always had, including the monitoring and destruction of the more than five hundred alternative newspapers staffs it had under surveillance. (At the same time, the FBI also monitored alternative and campus newspapers, sometimes suppressing them.)

Henceforth, Colby wrote in a memorandum after that meeting, the label “international terrorist” would replace “political dissident” as the target of the CIA’s illegal domestic operations. As part of this image transformation, Helms did what Hoover had done many times—and would do again in April 1971 to protect COINTELPRO when he thought it was about to be revealed—to minimize the possibility that secret operations would be exposed. Helms ended MHCHAOS in name, but continued it in reality with a new name: International Terrorism Group. It would be much easier for people, including people within the CIA, to accept the domestic operations if they thought they were aimed primarily at stopping terrorism rather than at stopping dissent.

It’s common to hear law enforcement officials describe non-violent activists as terrorists today. History suggests we can thank former CIA director Richard Helms for that, at least in part. Years after his agency’s assassinations, anti-dissent programs, antidemocratic coups, and other dirty tricks were exposed to the public in congressional hearings during the 1970s, Helms reportedly said that all of it was “just a congressional firestorm over nothing,” Medsger writes.

The CIA’s domestic operations offices are currently based in Denver, Colorado. Per an executive order signed by Ronald Reagan in 1981, the CIA is allowed to collect information about Americans. The details of the order are classified, so we can’t be sure, but it’s a safe bet to assume that if the agency wants to spy on American dissidents, it just calls them Terrorists.